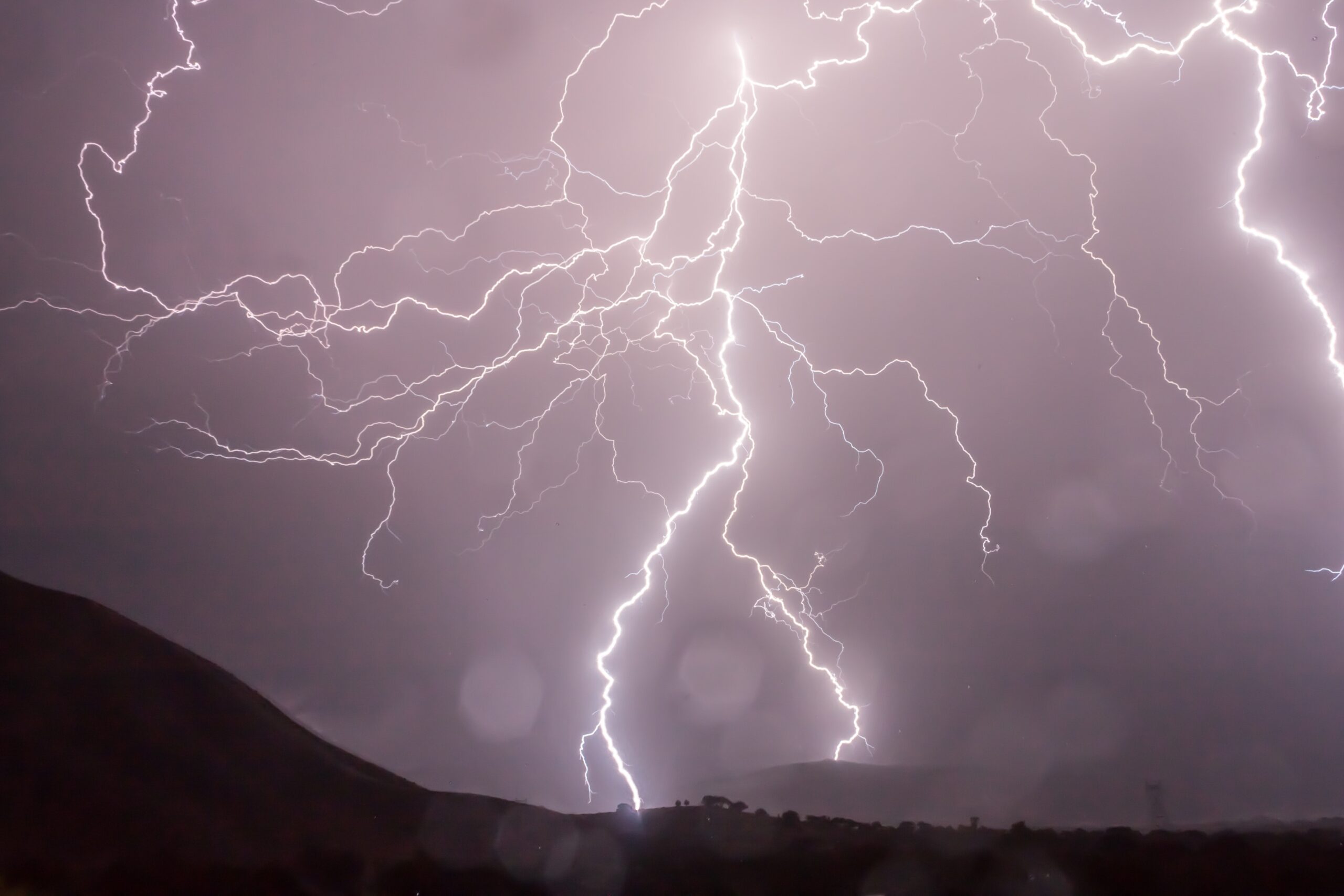 Unusual Travel Tips: The Bad, The Worse, The ???

Around New Year’s 2010 I went to Brazil. At the Manaus airport in Amazonas State, I was looking up at the information board to find my flight home. I was going to São Paulo where I was to get my connecting plane back to Miami. As I gazed at the board I noticed a non-stop direct flight Manaus-Miami, 5 hours no less.

Where was that flight when I was planning my trip? Or, rather, where was my notion of geography when I was buying my tickets?

Okay, so I wasn’t on the direct flight. I was on one going from the north of Brazil (Amazonas State) to the south (São Paulo), namely the exact opposite direction from my eventual destination. Many hours later, when we arrived in the air space around São Paulo, the plane kept circling. Finally the pilot came on to say we couldn’t land at the international airport because of the thunderstorms.

So we eventually landed at the domestic airport, where a bus met us to take us to the international one. By now it was pretty late. It turns out the two São Paulo airports are 100 kilometers apart. Furthermore, all the streets of the city were flooded, so the going was slow.

We got to the international airport around 4:00 a.m. There was no place to sit other than hard benches and nothing to do but wait until 8:00 a.m. to try to figure things out in the midst of the crush of other stranded travelers. Misery.

We all have such stories. They’re of bad weather, missed flights, delays, exhaustion, boredom, and confusion. 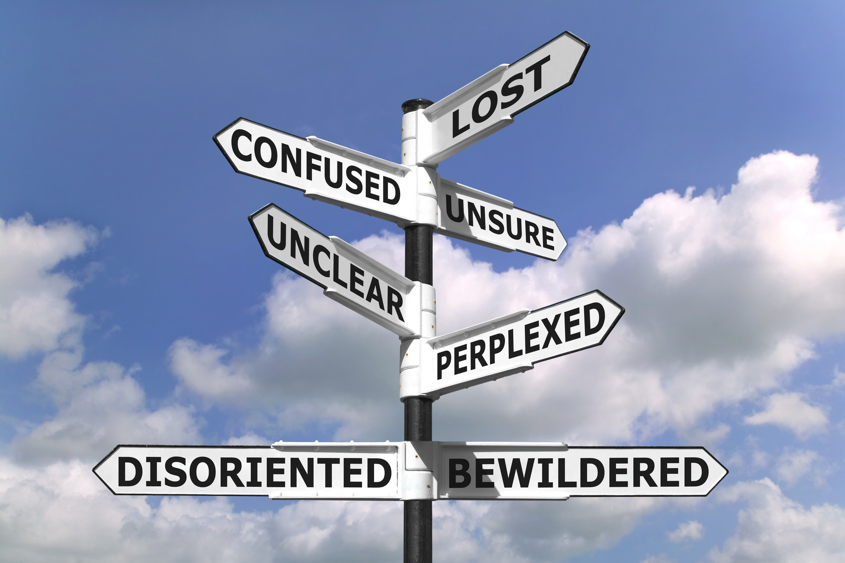 Unusual travel tips #1. How to avoid all this? Stay home.

But then you’d miss all the great stuff and even some of the horrible stuff that turns out to be kinda great – or, at least, instructive.

Case in point: When I was in Kuala Lumpur this past April, part of my guided excursion included a stop at Menara, the space needle. When I understood we were supposed to go up it, I declined the treat. Elevators aren’t my thing. However, my itinerary called for me to have lunch in the space needle restaurant. 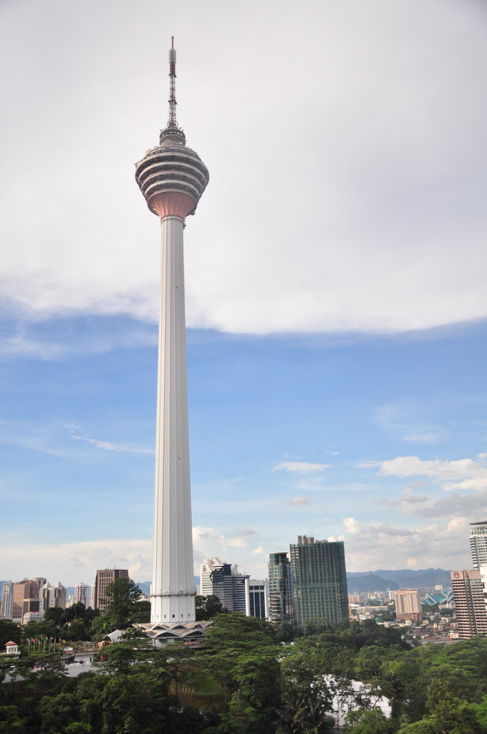 So I suffered the elevator and then had to suffer the lunch. The restaurant was a tourist joint. Long tables with place cards that read Holiday Asia and Freestyle Holiday were set up for groups of 20 and 30 or more who were soon to file in.

I sat at a table alone. I didn’t mind sitting alone. I do it all the time. I have plenty to think about. One of my thoughts was, “I should have never been taken here!”

There was a huge buffet with at least a dozen covered dishes – including Beef Stroganoff, of all things – and another half-dozen covered baskets with dim sum. All the salads and desserts you can image … and there wasn’t a darned thing for me to eat.

The food was, in a word, crap. When I realized I would need more and more of it in order to come to some kind of satisfaction, I put my fork down and thought I was better off waiting for dinner.

The restaurant revolved, and if you were there long enough, you’d get a 360° view of the city. Fine. Here’s a shot I got of the Petronas Twin Towers: 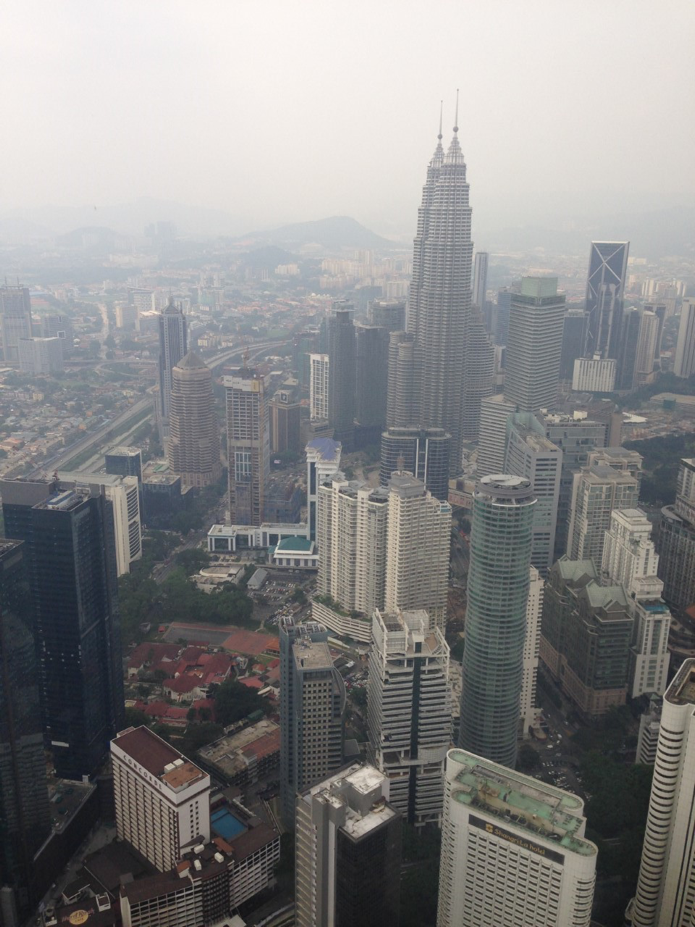 Of course, a bad lunch isn’t the worst thing that can happen when you travel. Nevertheless, here’s:

Unusual travel tips #2: If you have bought a tour and you are either traveling alone or in a very small group, do not accept the scheduled (and paid for) lunch place. Ask your guide for a good, local restaurant and pay for your own meal, along with your guide’s.

When you travel, you are likely to be taken out of your comfort zone. I’ve gotten to the point where, when I see or hear or witness something weird, I just say to myself, “Hmmm… I wonder what’s going on here? Maybe I’ll figure it out – maybe I won’t.”

My trip to Balcic, Bulgaria in July provided me with an occasion to wonder about the contemporary Russian male and their perception of their bodies. The owner of the hotel we were staying at is Russian, and a lot of his clientele is also Russian.

At the seaside pool I saw a lot of flesh. I mean, lots and lots. For instance: 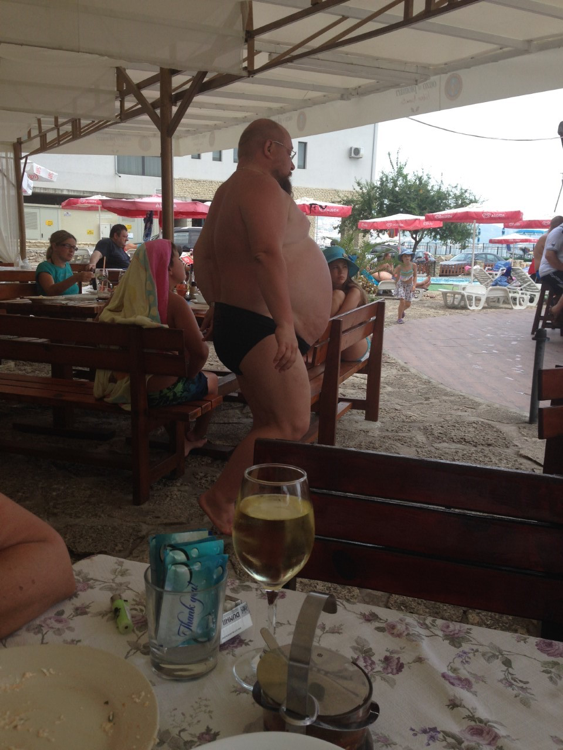 My questions are: Does he think he looks good in a speedo? And would he be pleased to be included in this blog? I may never know the answers.

Unusual travel tips #3: When confronted with weirdness, become an anthropologist.

Basel, Switzerland at a Glance – a travel blog