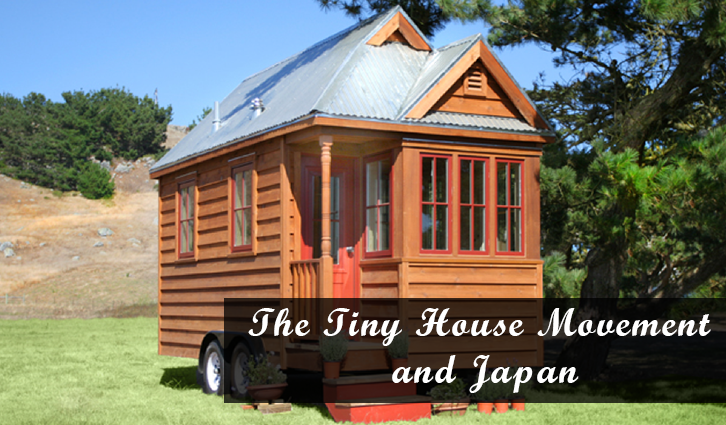 This week I stepped into my room at the Yakku Hotel in Koshien, Japan and was immediately put in mind of the tiny house movement in the United States and all the HGTV shows I’ve seen devoted to living tiny.

I’ve been to Japan twice before and have never thought of the tiny house movement before. Perhaps this time it came to mind because I now want to downsize from a condo of 2000 sq. ft. to one about 800 sq. ft. Okay, 800 sq. ft. knocks me out of tiny house parameters, but let’s say I’m hovering in the parking lot of the ballpark.

Why downsize? For some environmental concerns play a role. Others have rejected the idea they need to spend much of their lives working to pay for a house they don’t have much time to enjoy. For me it’s a lifestyle decision: I no longer care to use my primary residence as a very nice storage unit where I heat and cool stuff I don’t use and which just gathers dust while I travel.

On to Japan, the home of the original tiny houses. Here a blend of philosophy and aesthetics has long cultivated an appreciation for small, well-tended and uncluttered spaces.  The Japanese prize the mental and spiritual freedom that results from not being burdened by an excess of possessions. A bonsai tree, the perfect expression of Japanese aesthetics 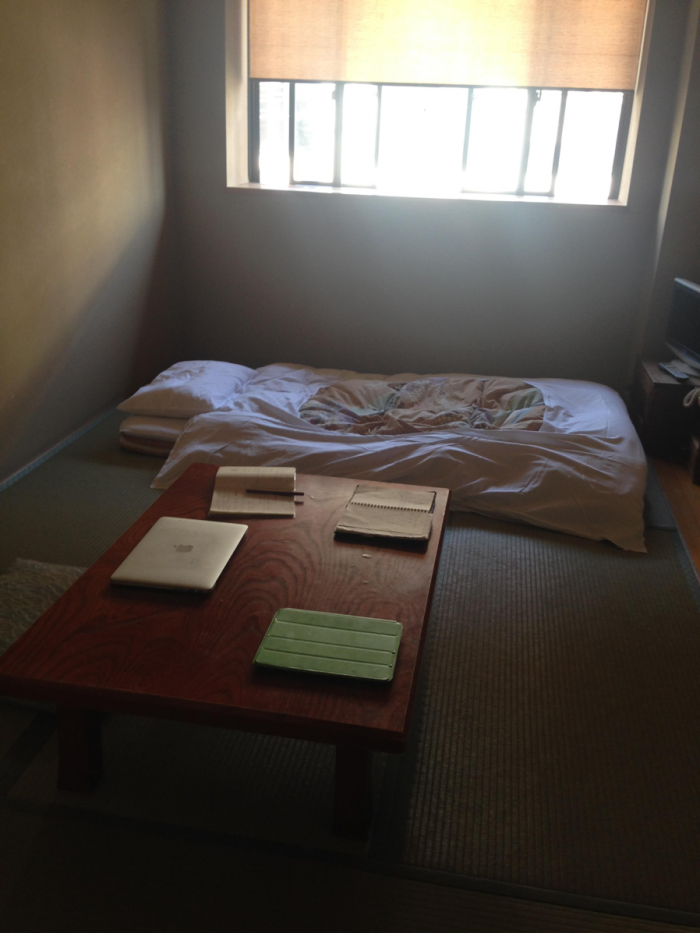 … namely a futon, a tatami mat and a table. The lighting in this photograph is dismal. The room is not as gloomy as it appears

Here is a view with the window behind me: For storage there are cupboards, here open: 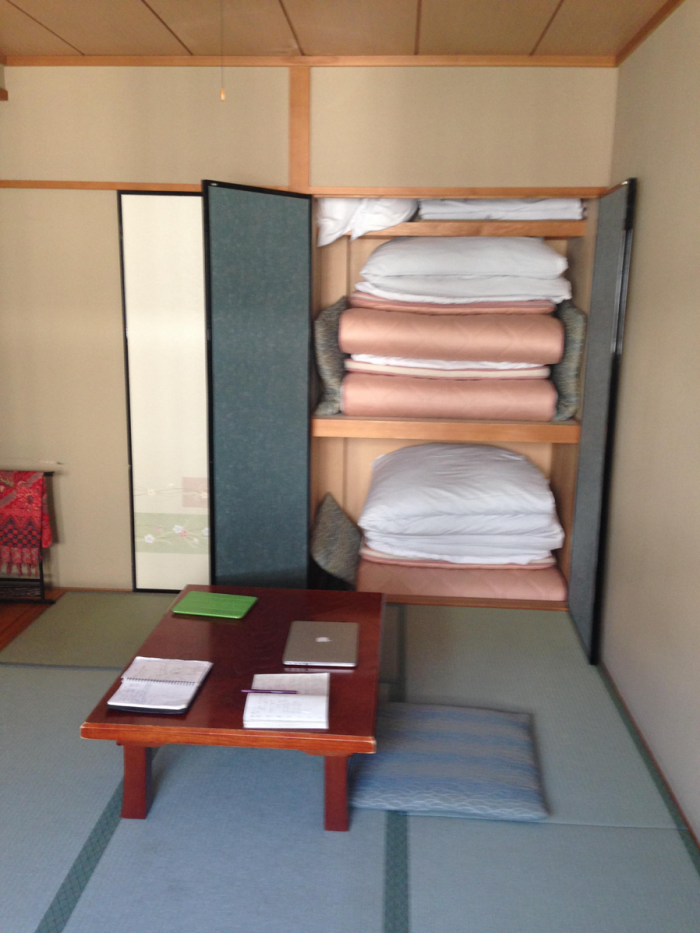 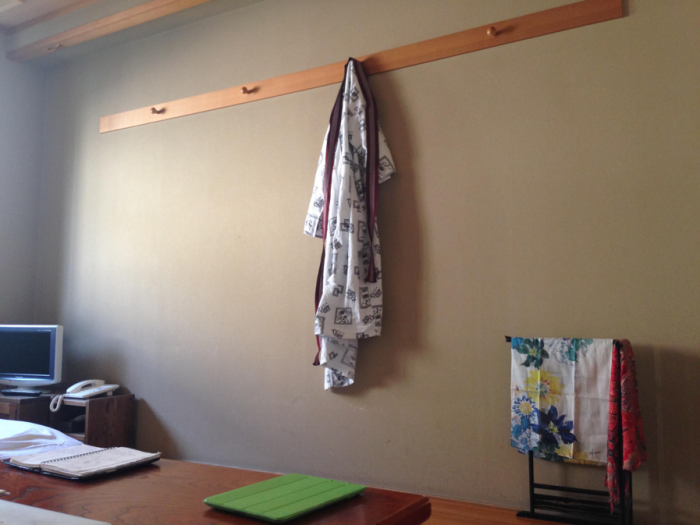 Hanging on a peg is the yukata – a casual summer kimono – provided by the hotel. You wear it to lounge around and to go to the onsen, see below

and a closet at the entry: 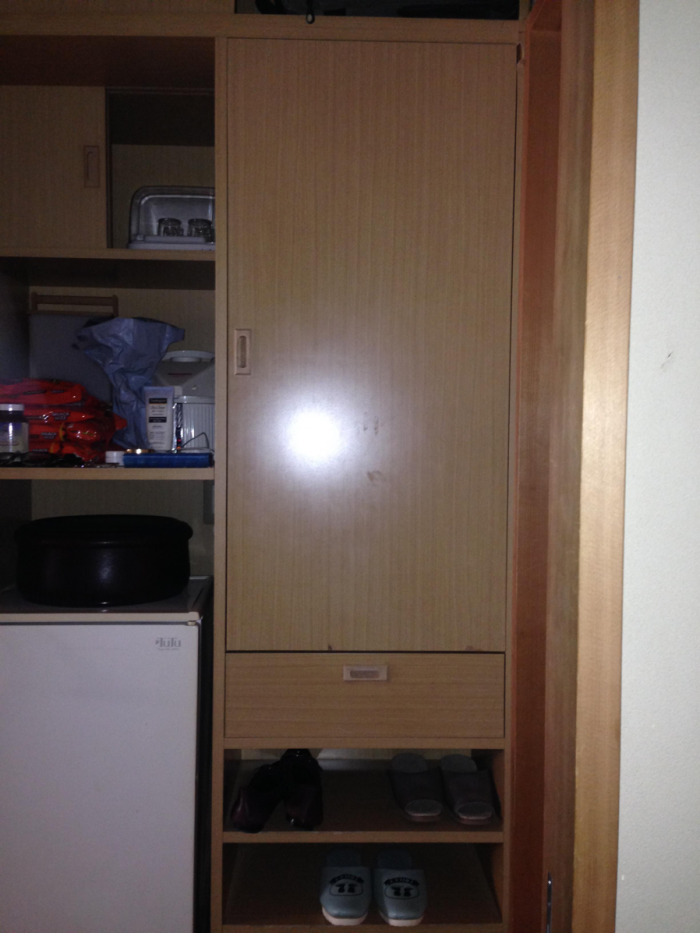 The sink is proportional to the rest: 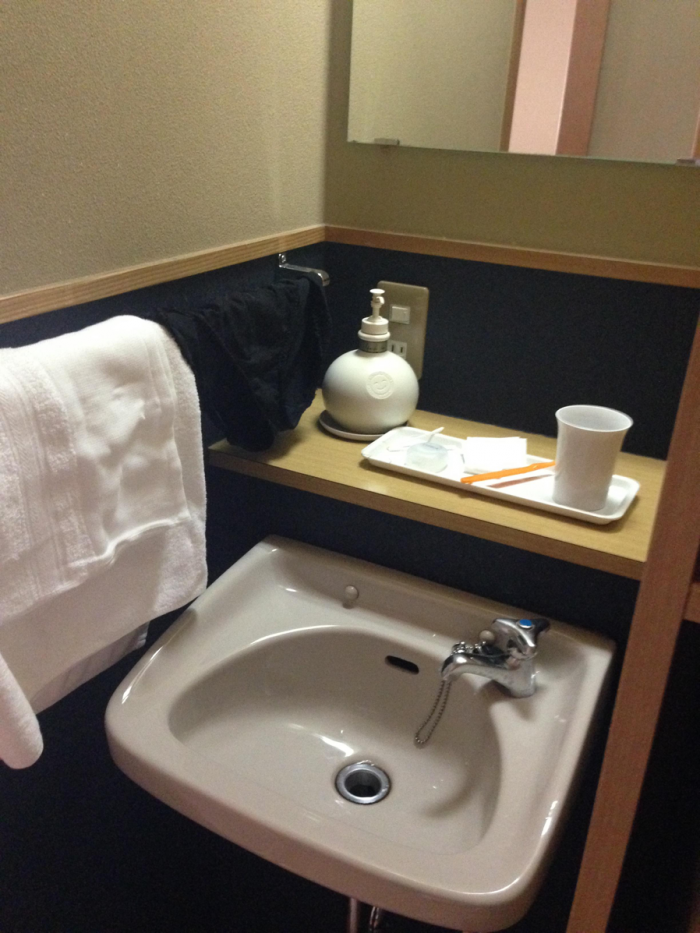 In my room there’s a toilet of course but no bath/shower in the room. This is because this hotel is ryokan ‘inn,’ which means it has an onsen ‘traditional Japanese bath.’ I will not take a picture inside the communal bath, but the outside shows the separate entrances for the men and the women: 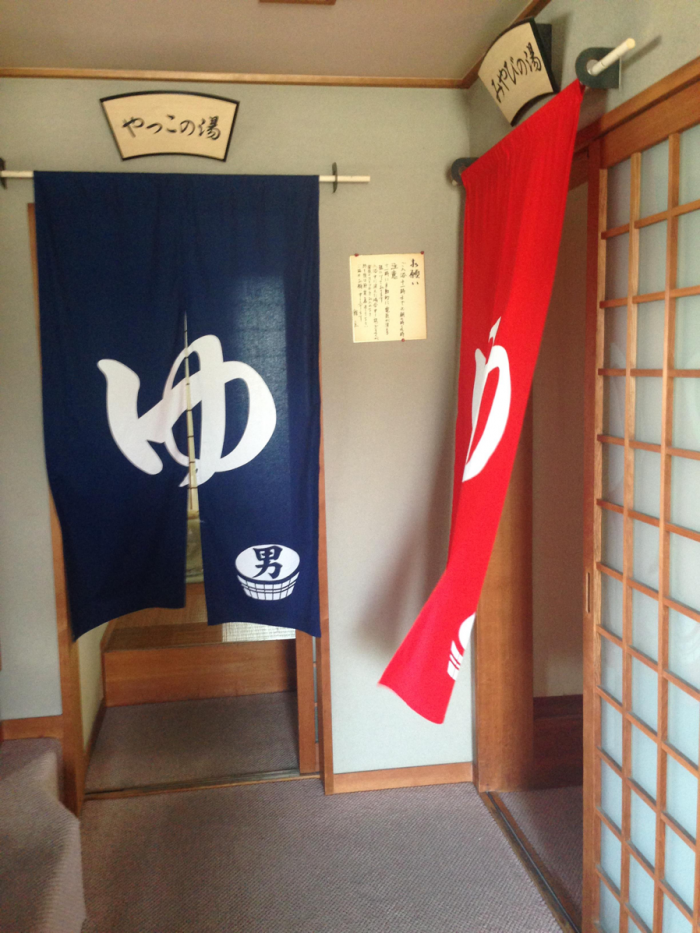 The women are red, the men blue

Inside the onsen there are all the amenities: soap, shampoo, conditioner, hairdryers. Before going into the pool, you take a shower sitting down on a stool and soap yourself up and rinse off at least three times.

The pool at this riyokan is about 4’ x 9’. The water is between Pretty Darned Hot and Really Freaking Hot. I can stand to remain in it – tops – 5 minutes. Most Japanese can soak almost indefinitely. The point is, why waste space with a tub/shower in every room when you can maximize resources with a big bath for all to share?

Every public space in the Yakku Hotel is perfect in simplicity. You can order breakfast in the dining room: 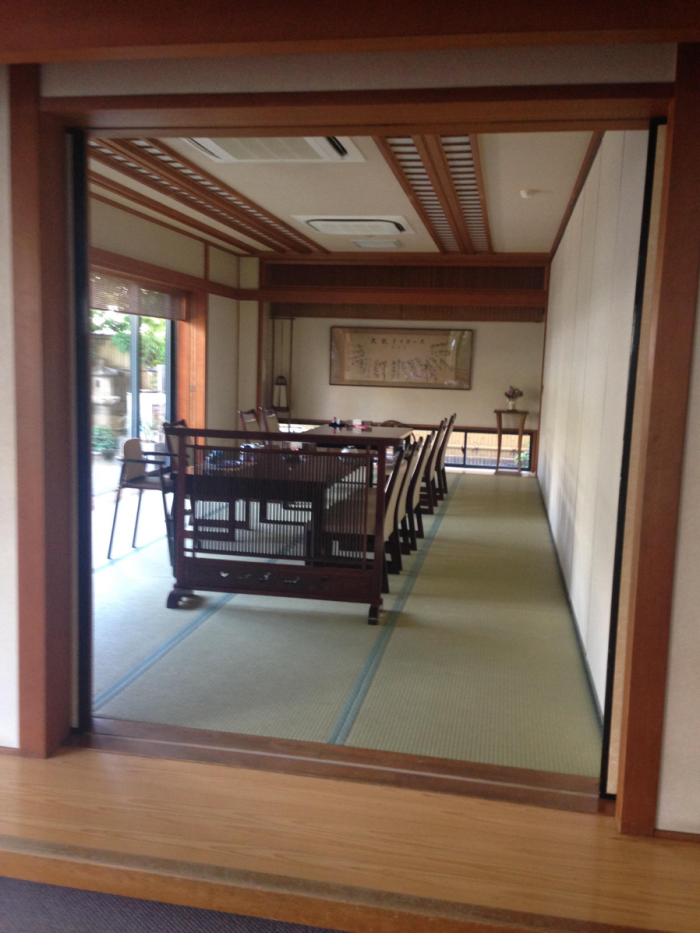 Koshien is home to the a major league baseball team, so naturally a shrine outside the dining room is in order: 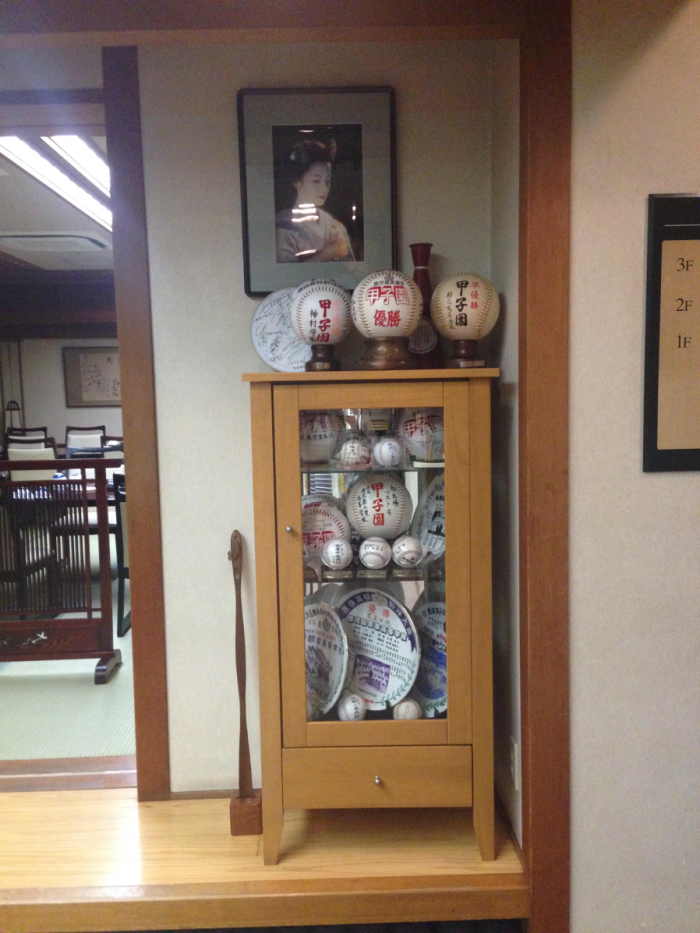 Right now I’m outside at a long table in the front garden, reading and writing and enjoying the manicured and sculpted sights in every corner. 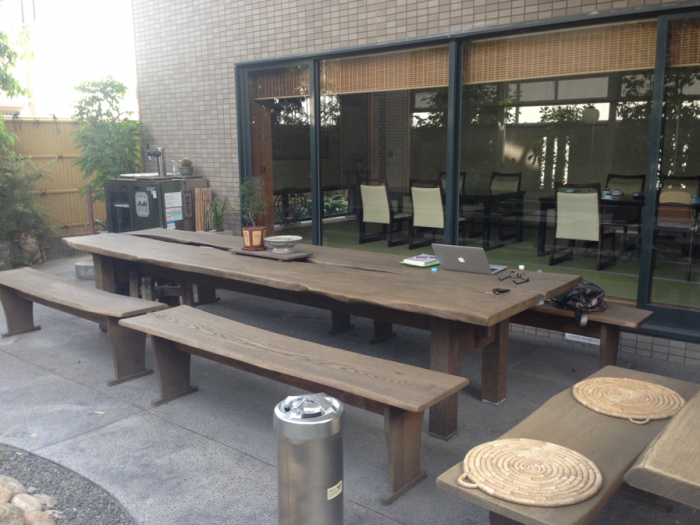 Here’s the entrance to the hotel: 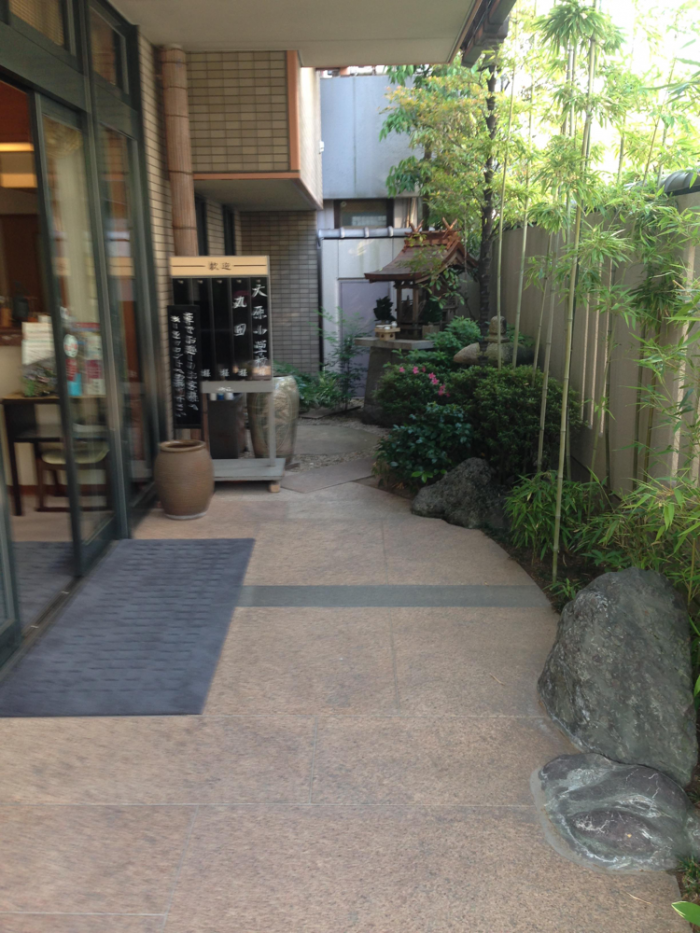 Tiny House: Back to the U.S.

Americans have long lived large. Some of us, overburdened by all our stuff, now yearn to live tiny – evidently so, given the runaway popularity of Marie Kondo, Japanese organizational expert, and her book The Life-Changing Magic of Tidying Up. It has sold over 7 million copies and has spent the last few years on the New York Times bestseller list.

Learn more about her at: https://konmari.com/

I don’t begrudge Kondo’s great success. However, I do wish to point out that I got Religion (= Decluttering) long ago with a great book by Karen Kingston Creating Sacred Space Through Feng Shui (1997). From what I’ve read of Kondo’s book, Kingston said it all and 20 years earlier. Check it out here.

January 2019 update: Netflix now has the series Tidying Up With Marie Kondo. 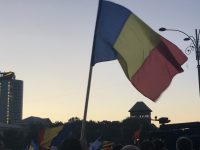