Trendy Charlotte, NC. I continue my quest to chronicle mid-sized American cities undergoing a Renaissance or, rather, a full-blown explosion. The title image is of downtown Charlotte, with the pointy-top Duke Energy building in the middle-ground center left and the spiky-top Bank of the America building in the background off-center right.

Since I’m far from a hipster, I relied on a Lyft driver – a 20-something transplant from Ohio – to show me the places he likes to hang out. I asked him whether ‘hipster’ was still used. He confirmed it was, and when I asked for synonyms he came up with ‘fashion-forward’ and ‘trendy.’ So, nothing I hadn’t heard.

This is the newest part of town, south of downtown (obviously), and defined to the west by South Mint Street. Where there’s gold, there’s a mint … and then banks, see the Bank of America headquarters, above.

The neighborhood is known for its microbreweries. On South Mint is The Unknown Brewery:

Nice to see the gleaming vats.

Down the street and around the corner is the Wooden Robot:

And then the usual thing after looking at old brick: I have only to turn around to see glass-and-steel going up.

The sign says: Dimensional Place, a Class A Development. What is it? I don’t know

I cross the street and get a  quick look toward downtown

then hit the east edge of the neighborhood, which  is set off by the light rail that runs north-south. Futo Buta, a great ramen shop I have eaten at, sits in front of one of the rail stations.

Now the bars really pile up:

The patios are packed with people drinking beer and watching a Carolina Panthers football game:

A beautiful wide walkway heading toward downtown is filled with pedestrians, scooters and skateboards.

To the north and east of downtown is where my Lyft driver hangs out. He says Plaza Midwood is more eclectic than the other areas.

Here’s a bit of eclecticism on Central Avenue: a tattoo parlor (are tattoos still a thing? I guess so), next to Mama’s Caribbean Grill and Bar, next to a Reggae joint, next to a vintage furniture place, next to a ….

Gotta have a pawn shop:

There is now an actual tourist attraction, namely the Thirsty Beaver Saloon, which my driver made sure to point out. It’s an old-time dive bar that held out in the face of development: 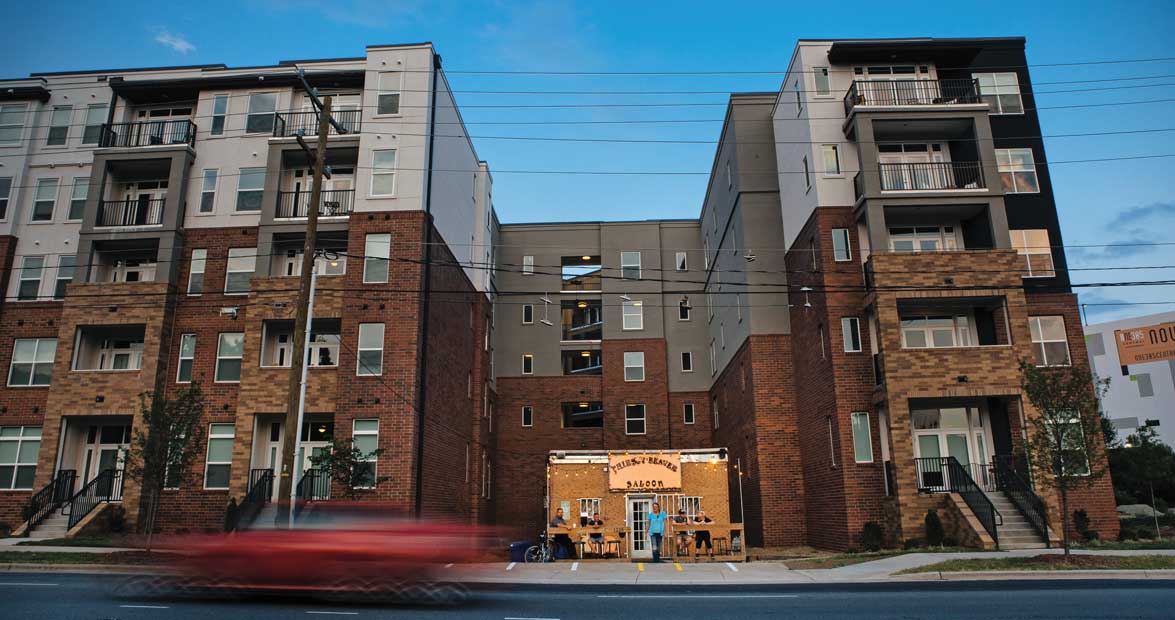 Side note: once the current apartment building boom is over, you’ll start noticing these holdouts everywhere. In Durham there’s a trio of buildings on Main Street now dwarfed (or cocooned?) by the apartment surrounding them:

Although these small buildings do not make as dramatic a mismatch between the Thirsty Beaver and its surrounding apartment complex, this parcel of land counts as a hold-out nonetheless.

Back to trendy Charlotte. There are an astonishing number of bars and restaurants in the this area:

What to do in Plaza Midwood

On the other end of the light rail, north of downtown, is the artsy neighborhood whose main drag is North Davidson Street, aka NoDa.

It’s full of galleries and restaurants. Boudreaux’s caught my eye:

It’s on the corner of North Davidson and 36th

Like other places in Charlotte (and North Carolina, for that matter), former textile mills have turned into shopping centers and/or apartments. Highland Mill was unique in that it once made gingham, whereas other NC mills made cotton. It went the way of lofts:

If I start my tour of trendy Charlotte with a brewery, I have to end with one. The most significant one in this part of town is Heist Brewery: 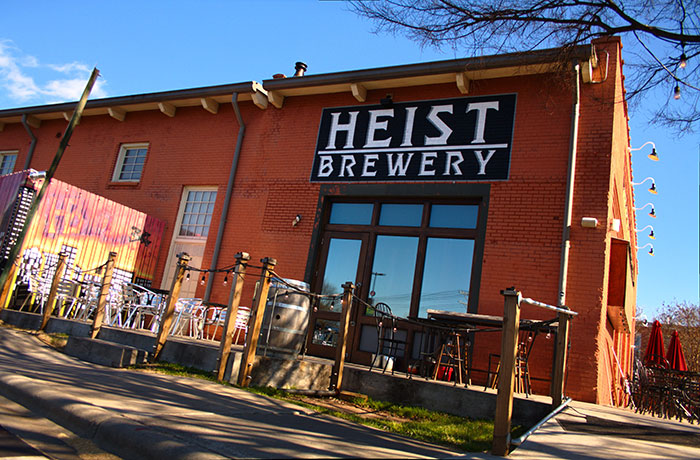 Why the name Heist? I looked at their website, but I didn’t see a reason. I wonder if it has anything to do with the fact that there was a mint on the south side of town, making it natural for someone on the north side of town to think of a heist. Just a guess.