So … last Tuesday morning when I woke up, I had no idea I would be in Havana, Cuba the next day. But that’s what happened. Here’s how:

Friend and co-author Phillip called me to say he had a last-minute invitation to attend a roundtable discussion of “El futuro del español en los Estados Unidos” at the Spanish Embassy in Havana on Wednesday at 5:00 p.m – and did I want to go?

Jet Blue has fantastic prices for Floridians. I arrived in Havana, Cuba before noon on Wednesday.

I bought my $50 visa at the Orlando airport. Havana is a 59-minute flight from Orlando. After a lifetime of thinking of Cuba as a far-away place (at least, psychologically speaking), it was eye opening to discover it’s cheaper and easier for me to get to Havana than to Raleigh-Durham.

The arrival at José Martí Airport was uneventful. José Martí was born in 1853 and is sometimes called the Apostle of the Cuban Revolution. 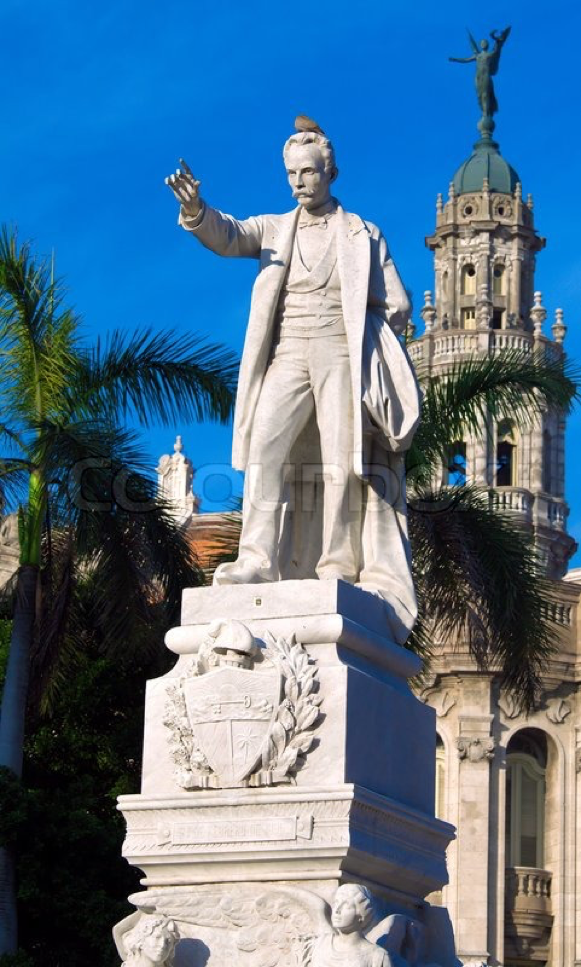 Statues of him abound. Here he has a bird on his head

Because of the late planning of this trip, the banks were already closed on Tuesday, so all I could get from an ATM before I left was my daily limit of $500. I was hoping it would be enough. (It wasn’t.)

The first thing was to change money at the airport.

Foreigners get CUC (Convertible Cuban Pesos). Cubans use CUP (Cuban Pesos). The CUC is pegged to the dollar, with 1 CUC = $1. However, in an exchange, $100 dollars will fetch only 87 CUC.

Here is the relationship between CUC and CUP I spied on the menu at the Café del Prado, which I stumbled into for lunch on the first day, while waiting for my friends to arrive: 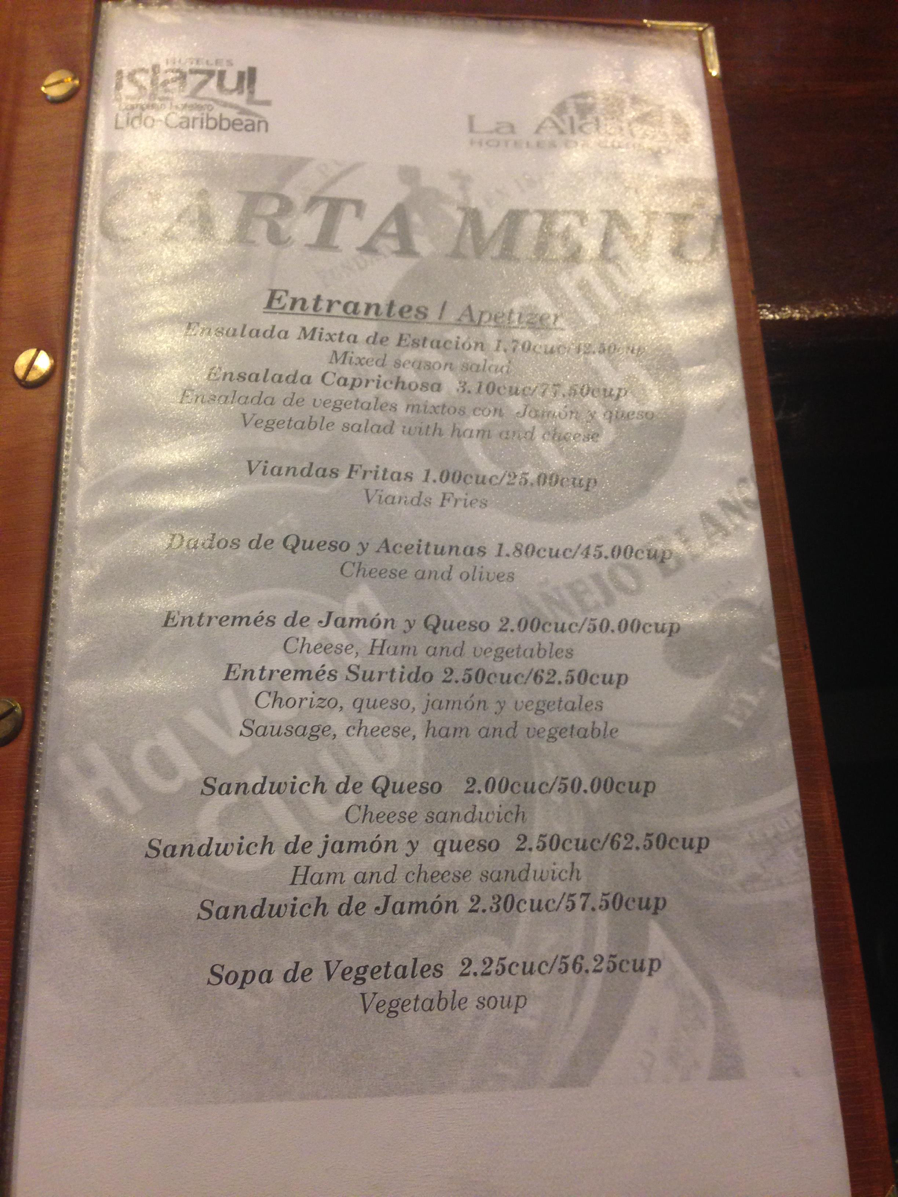 The prices of Viandas Fritas simplify the story: 1 CUC/25 CUP

In Cuba, American credit cards do not work. Cards from other countries do, say, from Australia.

Immediately upon arrival I discovered to be absolutely true the one thing everyone knows about Cuba: it is the land of vintage American cars! 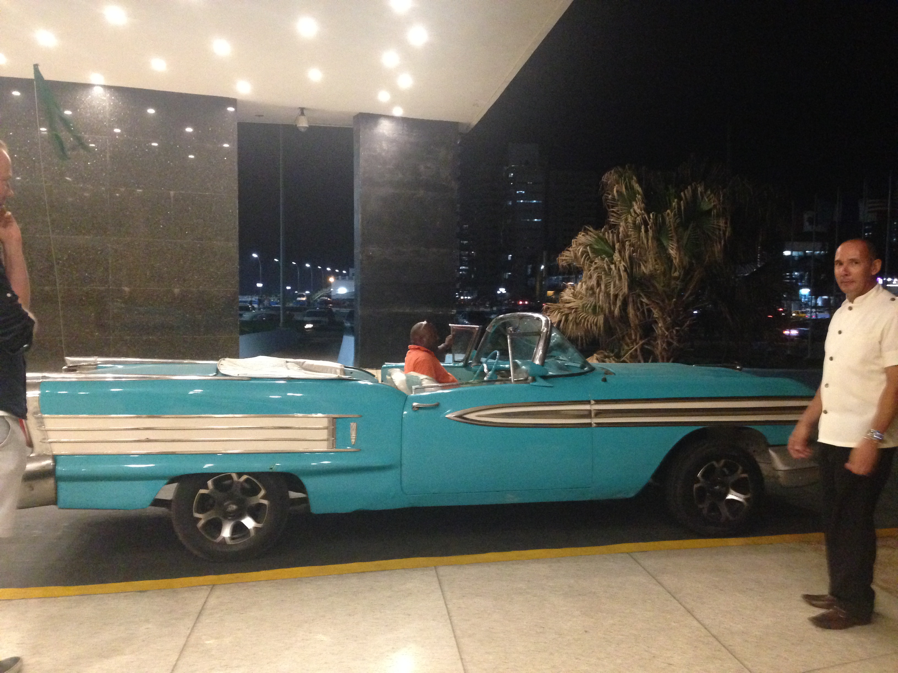 A taxi pulling up to our hotel 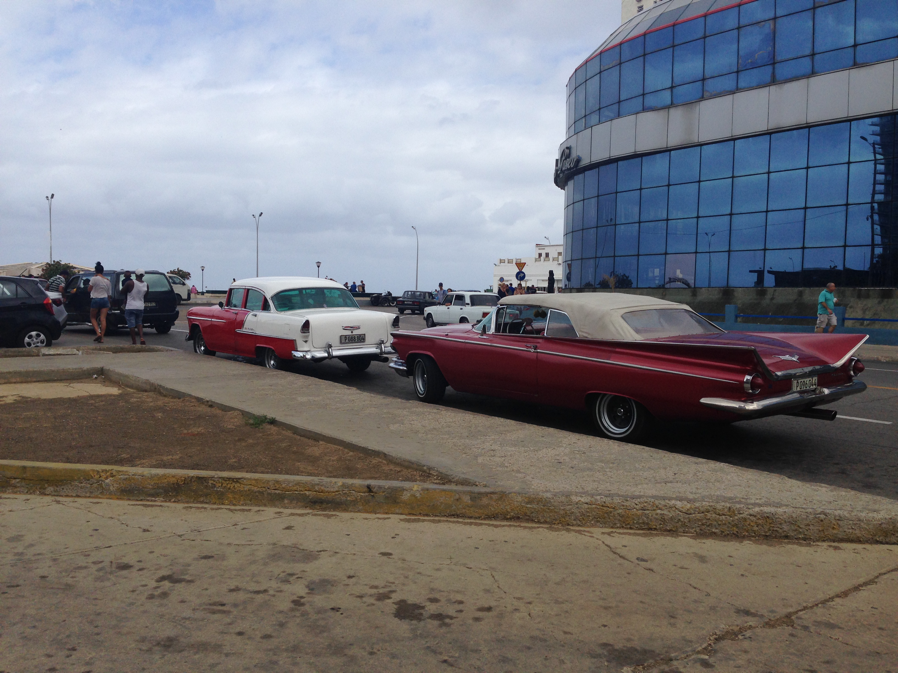 In the street outside our hotel

And let’s not forget the Soviet-era Lada. 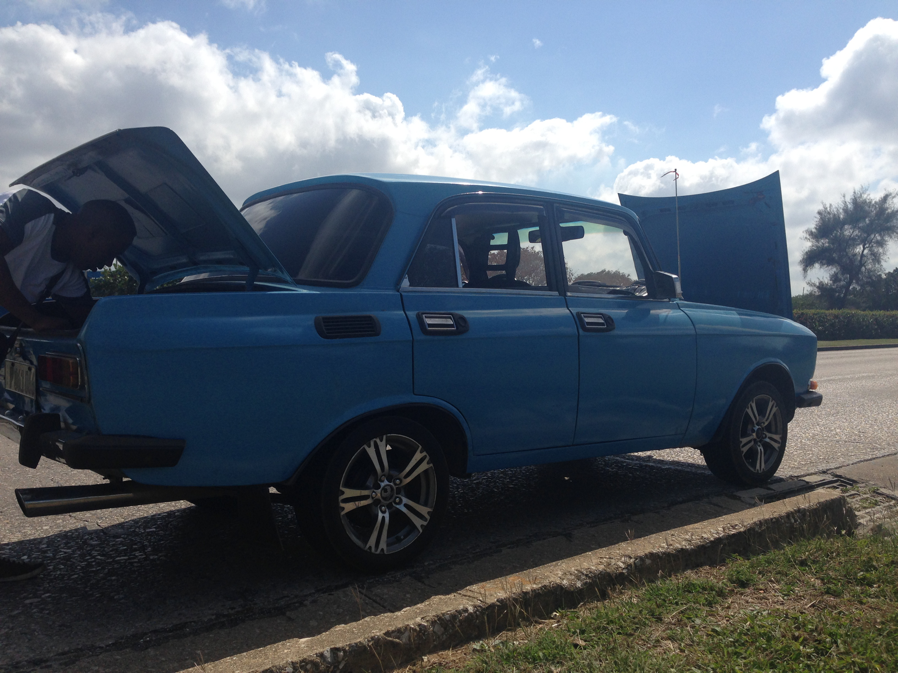 Here’s a Moskvich 1500, which has unfortunately run out of gas (a story for Day Three)

I’ve traveled in enough Communist and post-Communist countries around the world to confirm that the cement mixer of Communism did its work here, too. 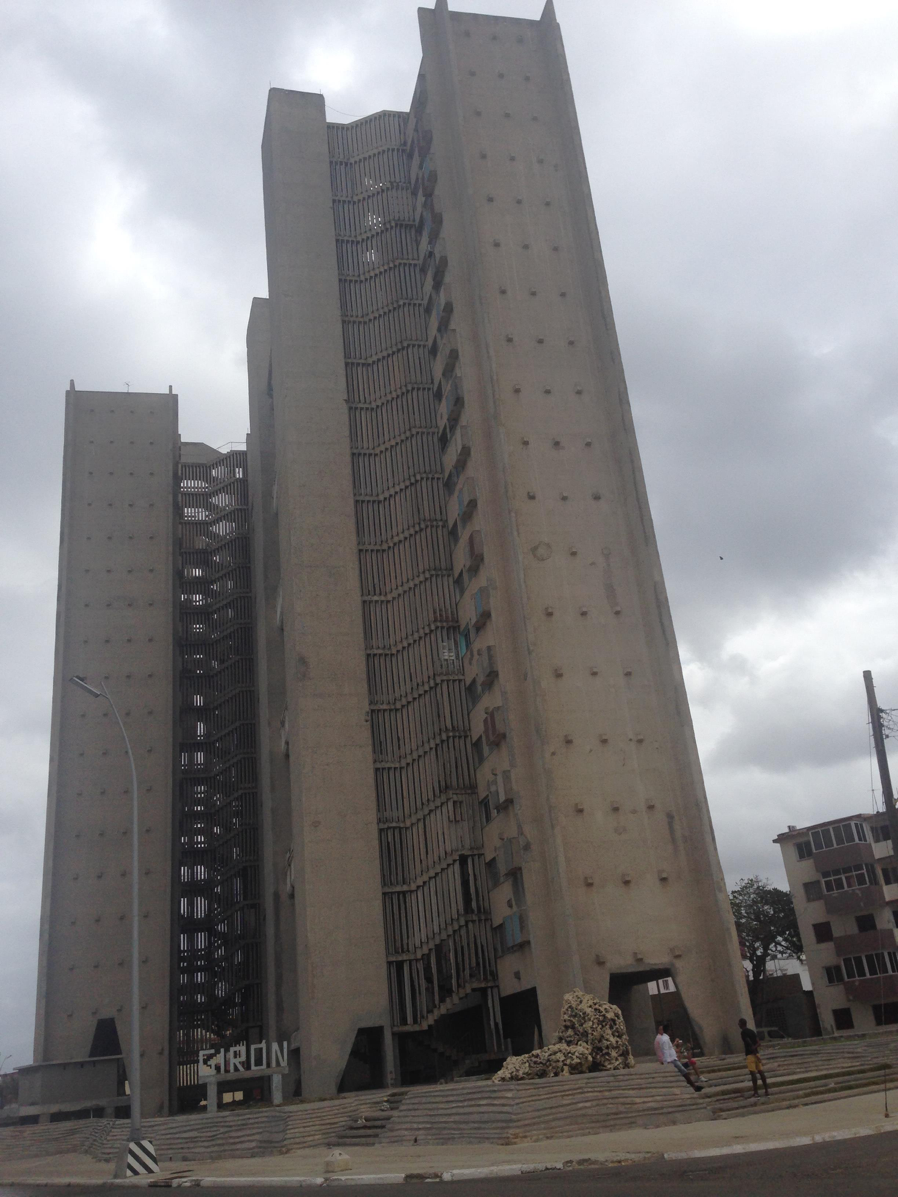 The Girón, a dystopic apartment building, which looks like it should be in a post-apocalyptic movie 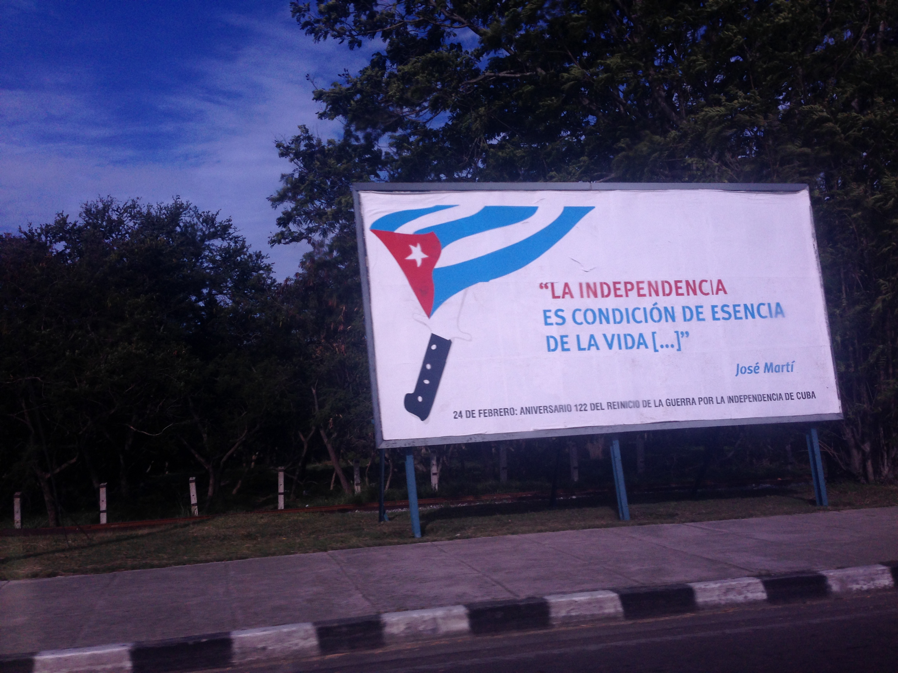 Nice! One by José Martí: “Independence is the essential condition of life”

The main drag along the waterfront is Paseo de Malecón, a 10-mile drive from one end to the other. 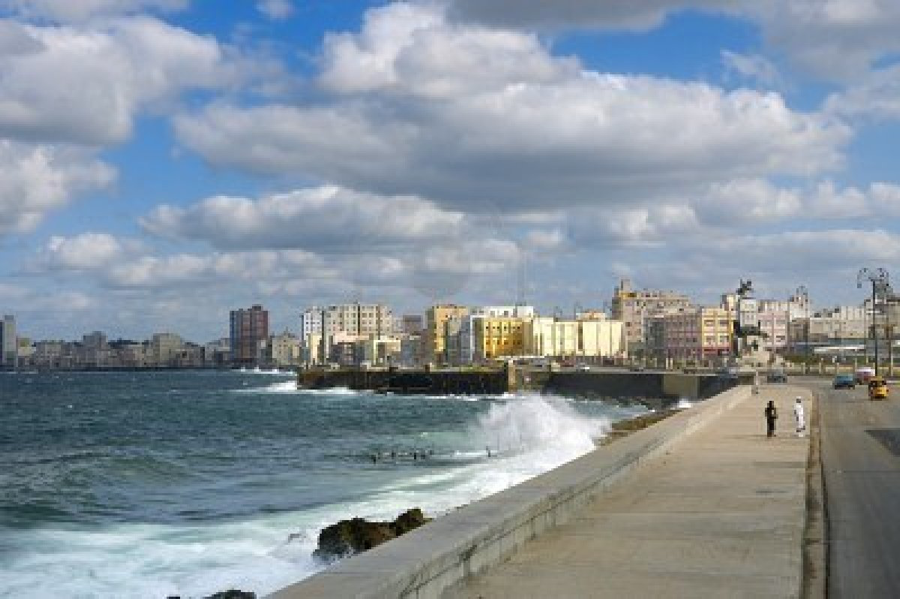 Linguistic note: pay attention to the ‘l’ in malecón. If you slip up and say maricón, you have said ‘faggot.’

At one of end of the malecón is our hotel, Habana Riviera: 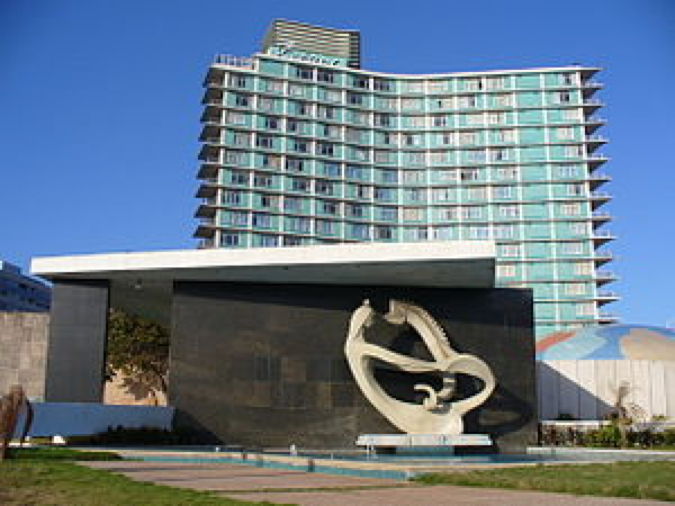 It was built in 1957 and originally owned by mobster Meyer Lansky.

Here’s a view from the lobby bar: 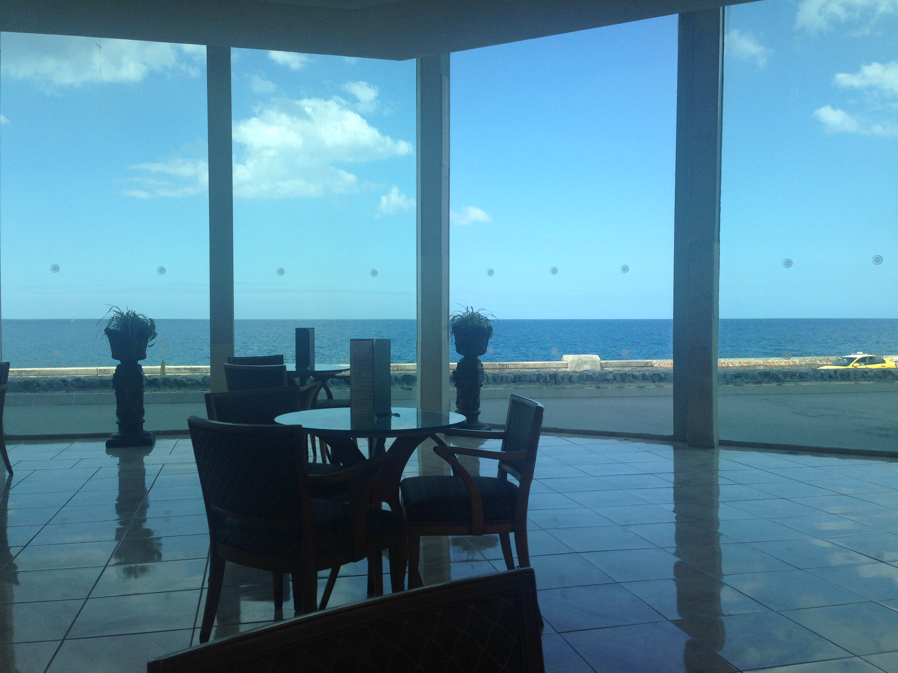 By the way, from the lobby bar I did a count of 100 cars that passed by on the malecón and came up with 56 new cars to 44 vintage. Although this one tally hardly counts as scientific, it is still suggestive of the astonishing number of vintage cars on the road.

At the other end of the malecón is El Morro (Spanish for ‘snout’), a Spanish fort begun in 1589. 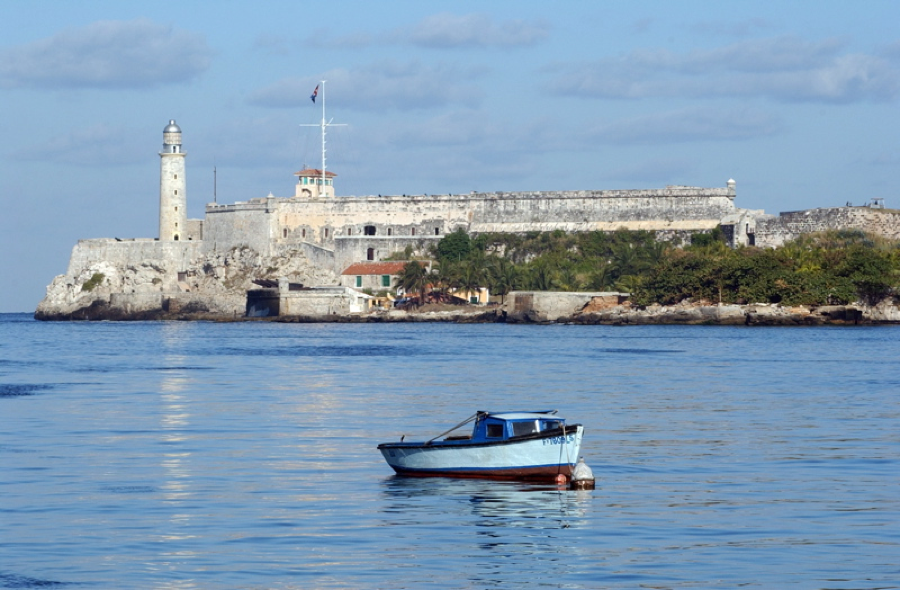 The Spanish Embassy is at the El Morro-end of the malecón. The lines for visas outside the embassy were long.

As I’ve said, our pretext for going to Cuba was the event “The future of Spanish the US.” 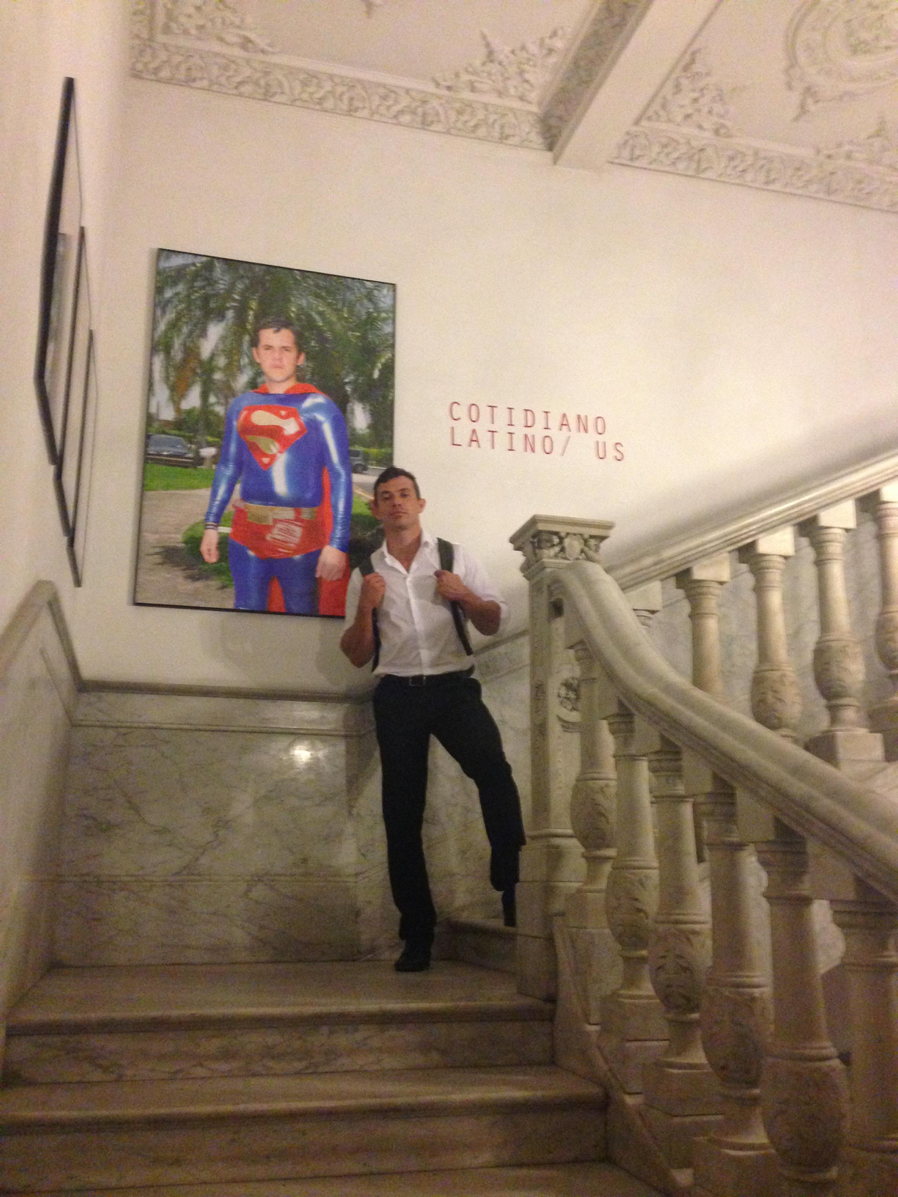 Here’s Phillip going up the steps in the embassy

We never did figure out what the kid in the Superman costume was all about.

Nor could anyone say what the future of Spanish in the US might be. However there was wine and appetizers afterwards, so all was well. Plus we met people.

Afterwards we wandered through the streets of Old Havana. 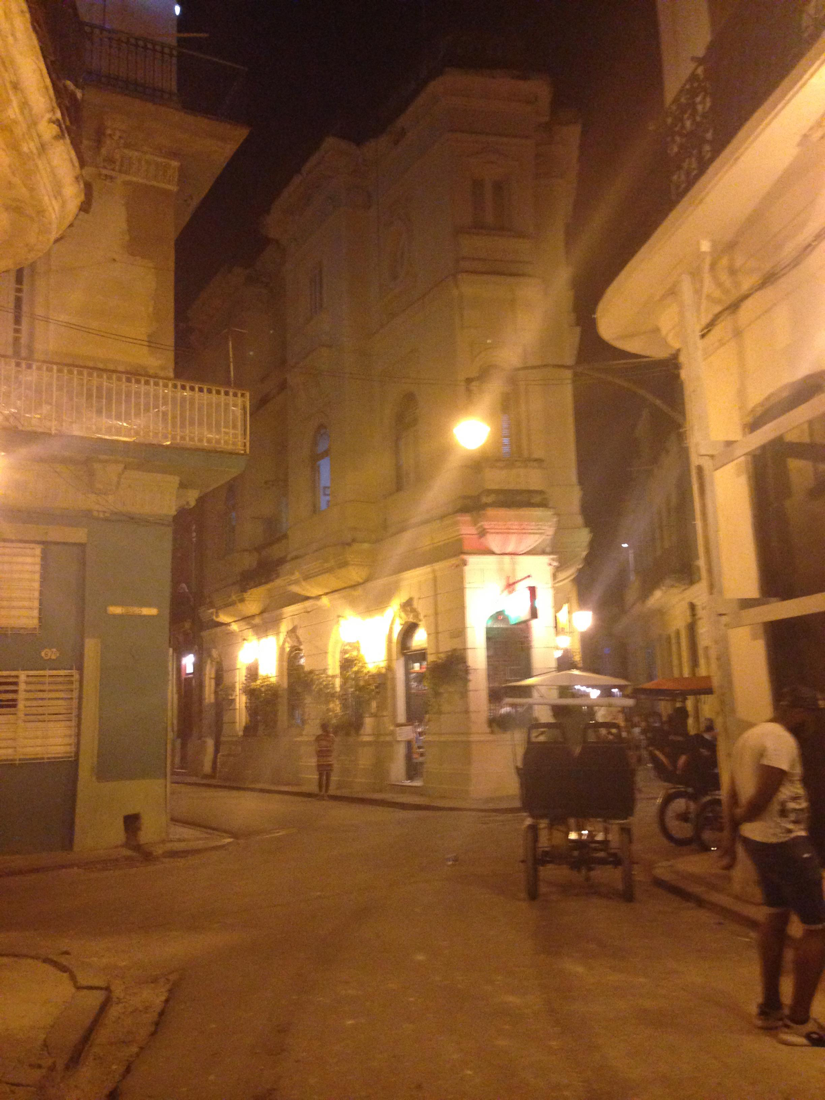 and chose a restaurant that looked good: 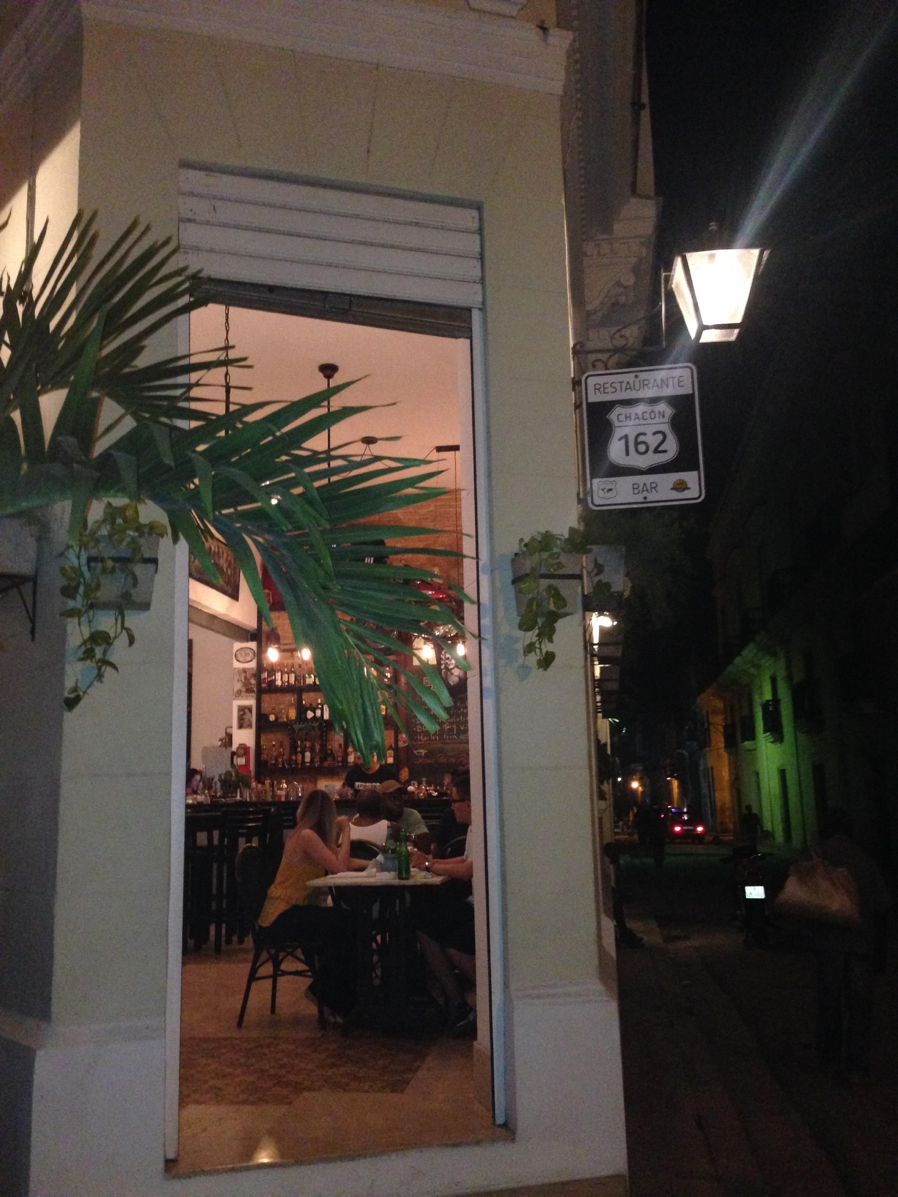 David and Phillip perused the menu. I contemplated the motorcycle suspended above the bar: 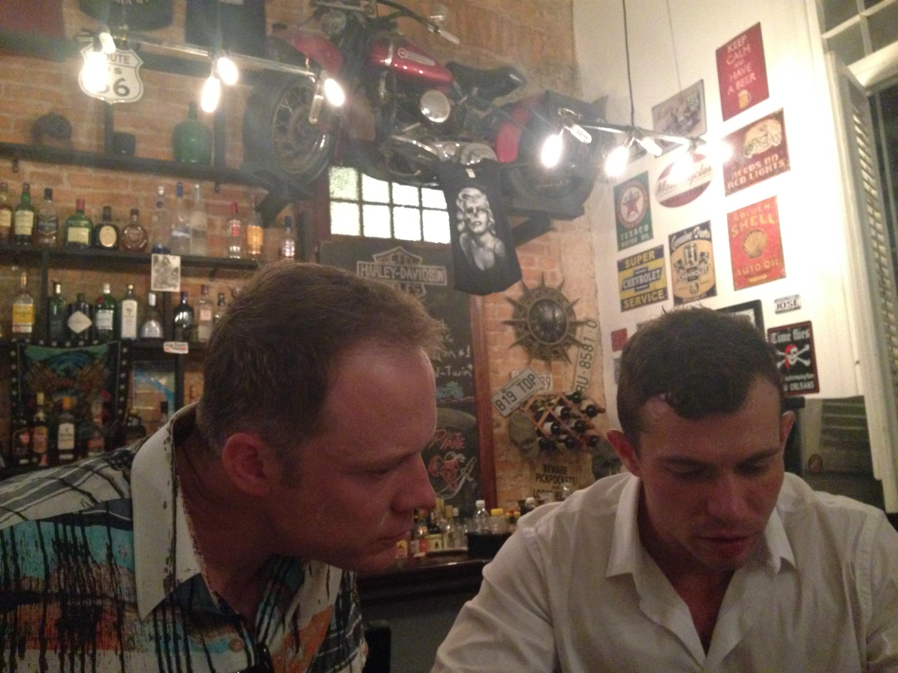 For starters we had a round of mojitos – as we did every evening thereafter.

End of Day One in Havana, Cuba.