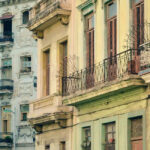 For our second daytrip we decided to go to the closest fancy beach, Varadero, a little more than two hours east of Havana. To the north of the peninsula is the Gulf of Mexico. To the south is the Bahia de Cardenas. The peninsula is so narrow that, at some... read more 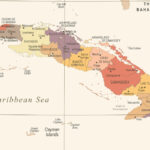 For those who have been to any other Caribbean island, what’s remarkable about Cuba is its size. It is much bigger than, say, Puerto Rico. Three hours to the west, in Pinar del Río, are the tobacco farms. Four hours to the south and west is the town of Cienfuegos... read more 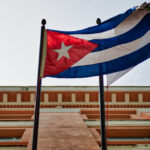 On the Town in Havana, Cuba – a travel blog

On the town in Havana, Cuba. Day Two was our history/political day. But, first, you gotta love hotel breakfast buffets. At the Hotel Riviera it looks like this: In the tropics you get all the wonderful fruit – mango, papaya, pineapple, and guava: In the backgrounds of both pictures, you’ll... read more 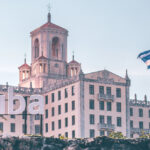 Title Image: Spanish Embassy on San Francisco Square – Havana, Cuba So … last Tuesday morning when I woke up, I had no idea I would be in Havana, Cuba the next day. But that’s what happened. Here’s how: Friend and co-author Phillip called me to say he had a... read more