Varadero – a resort town on the 20-kilometer Hicacos peninsula

For our second daytrip we decided to go to the closest fancy beach, Varadero, a little more than two hours east of Havana. To the north of the peninsula is the Gulf of Mexico. To the south is the Bahia de Cardenas. The peninsula is so narrow that, at some points, you can see both the gulf and bay from the road.

We lined up Massimo, our trusty but gasoline-challenged driver from the day before, and got on the road around mid-morning … and then about an hour later ground to a halt. 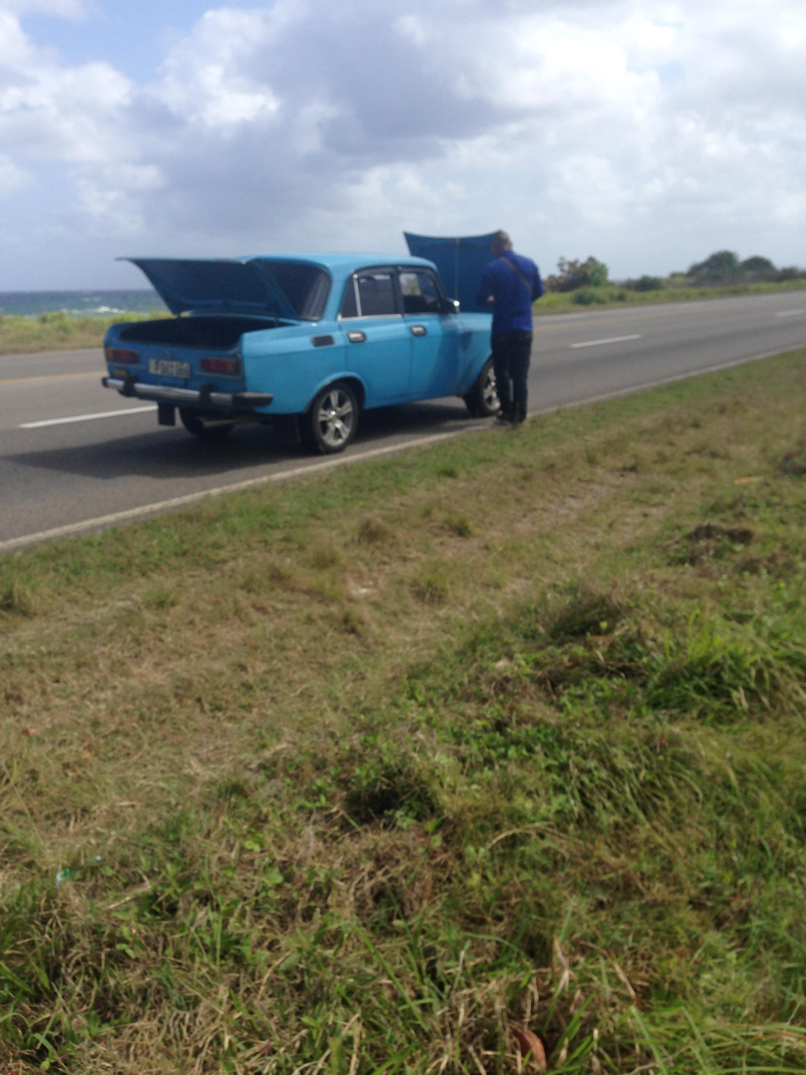 After a while I caught this photo: 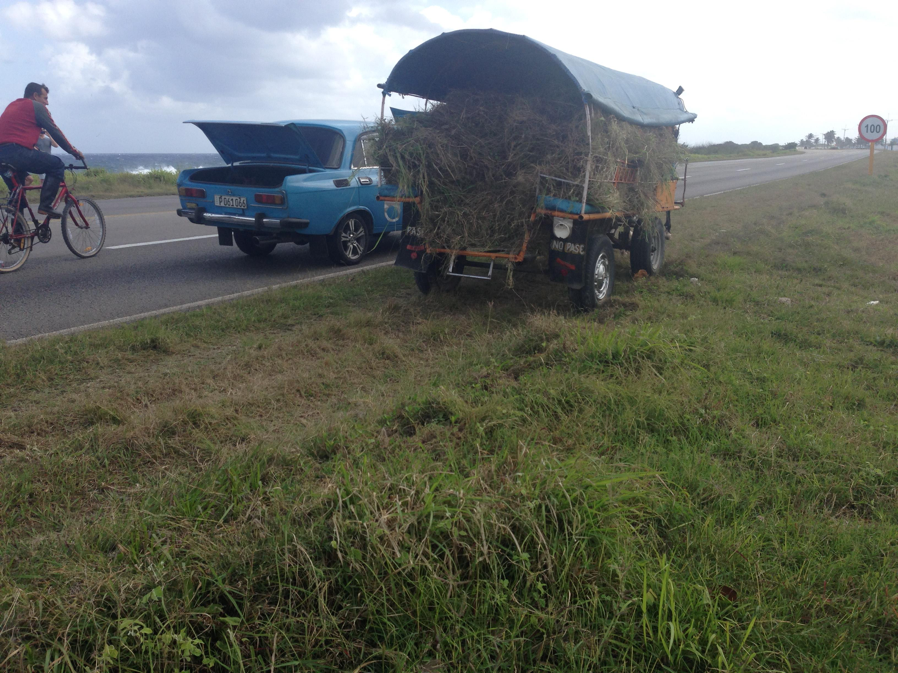 The question is: What is the more reliable form of transportation – bicycle, horse cart or car?

David continued his documentation of my umbrella struggles. Given the wind gusting (evidenced in the active waves), yes, my umbrella is once again inverted: 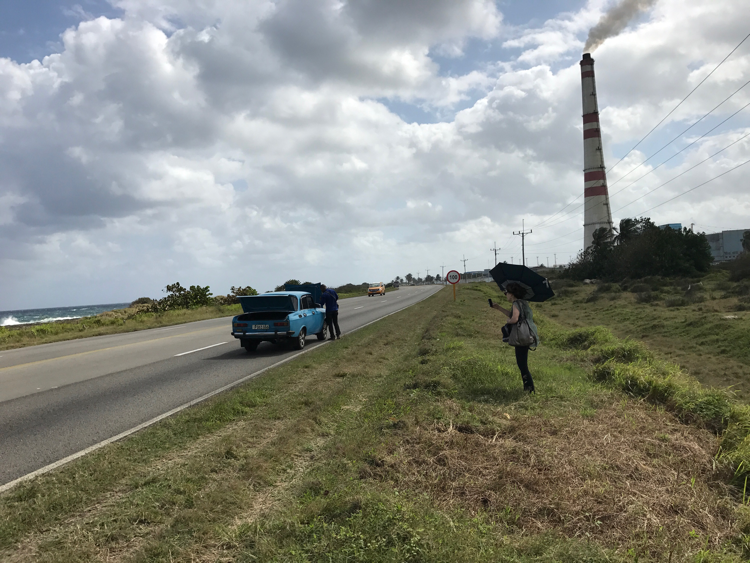 Some time later Massimo got the motor working, but we had come to realize his car couldn’t make it for the long haul. So he got us to a roadside stop about 10 kilometers further down the road and made a call to a friend. 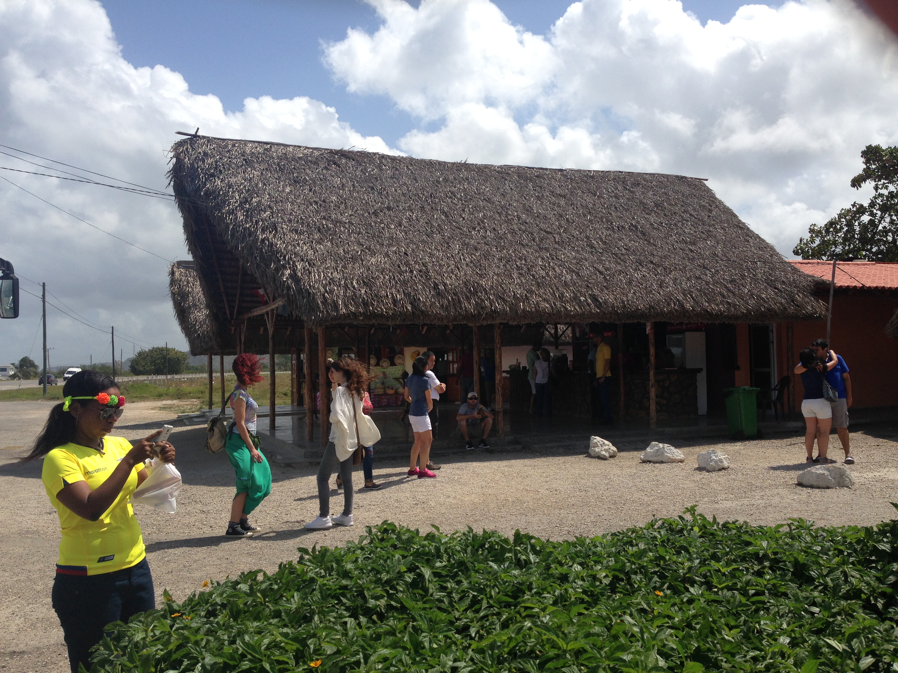 This roadside stop was a very busy place

The reason for the busyness became immediately clear: 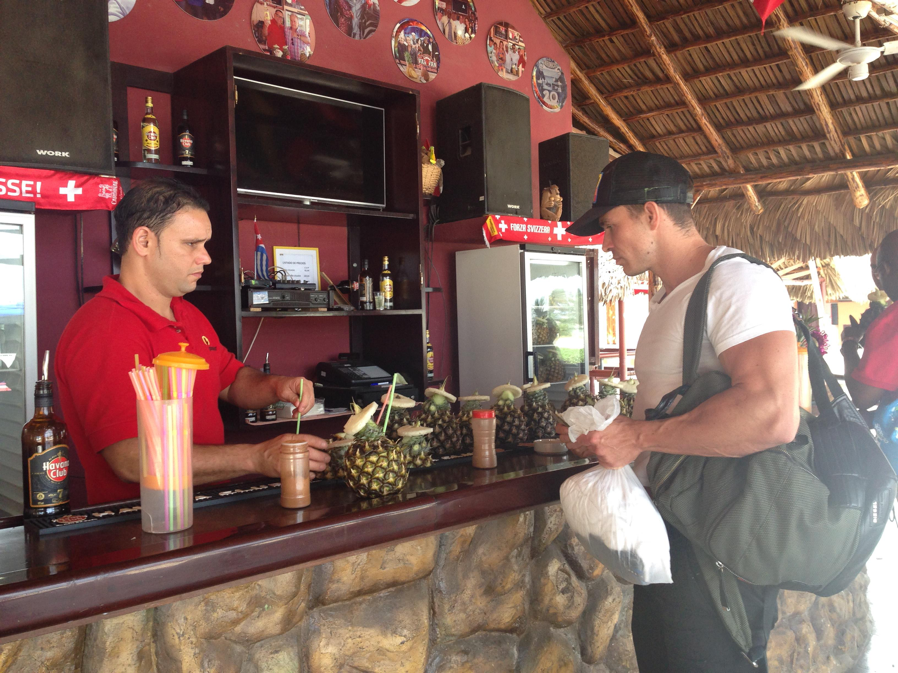 Although it was only noon, we figured we needed to recover from the rigors of standing around on the side of the road for an hour.

We had piña coladas. You see the bottle of Havana Club rum on the bar to the left. It turns out the bartender lets you pour your own rum “to taste.” 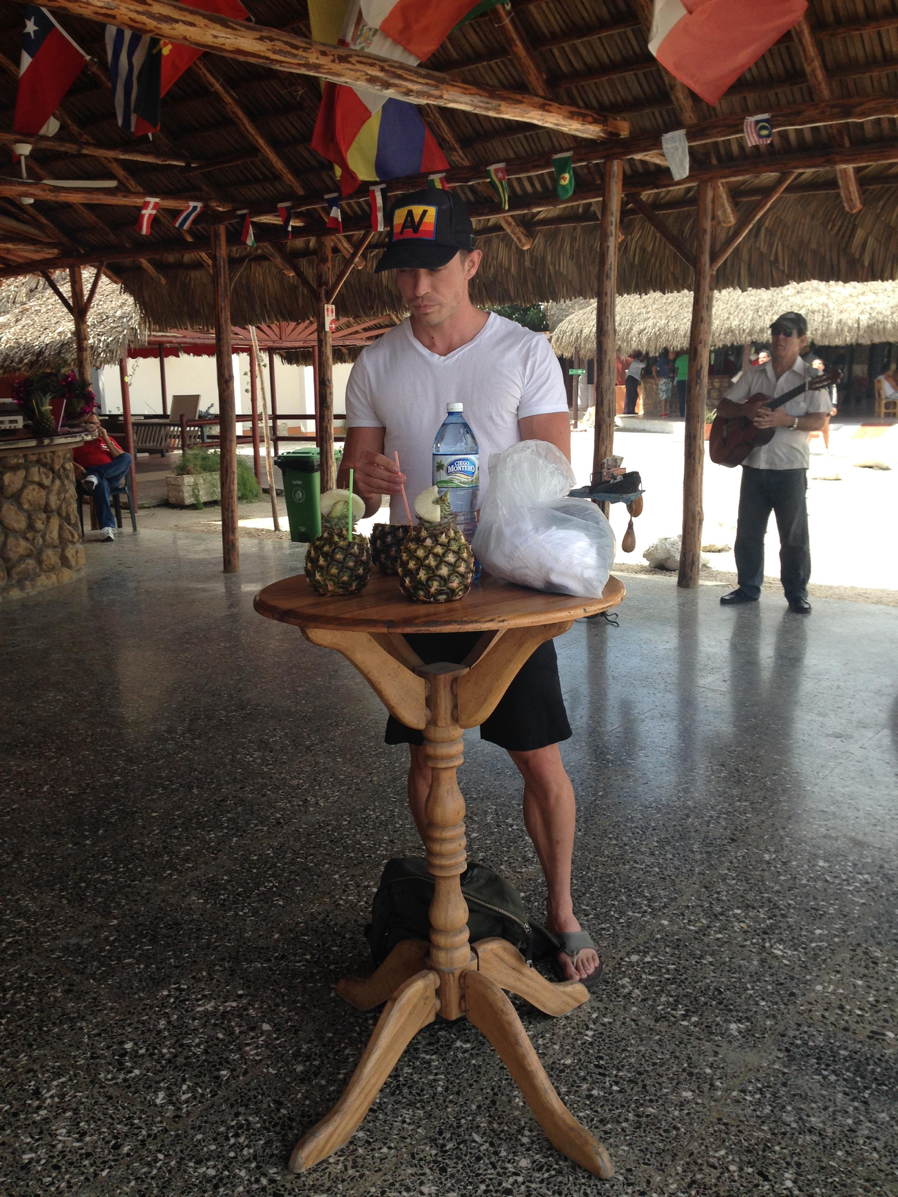 Phillip gets serious. There was live music – as usual in Cuba

One piña colada did not lead to the next but rather to a coconut juice and rum drink: 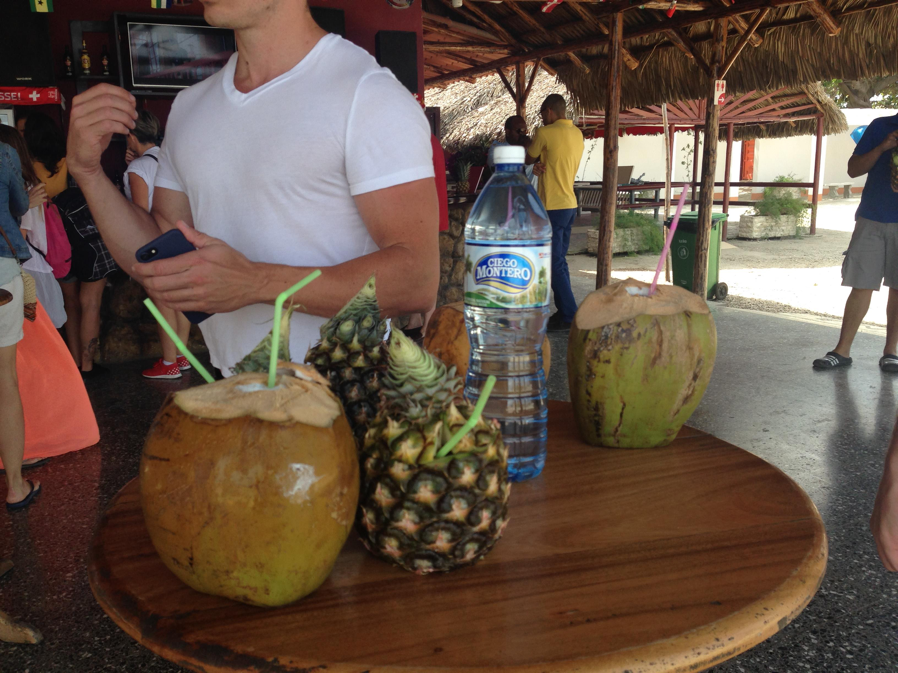 Pineapples for the piña colladas. Coconuts for the coconut drinks 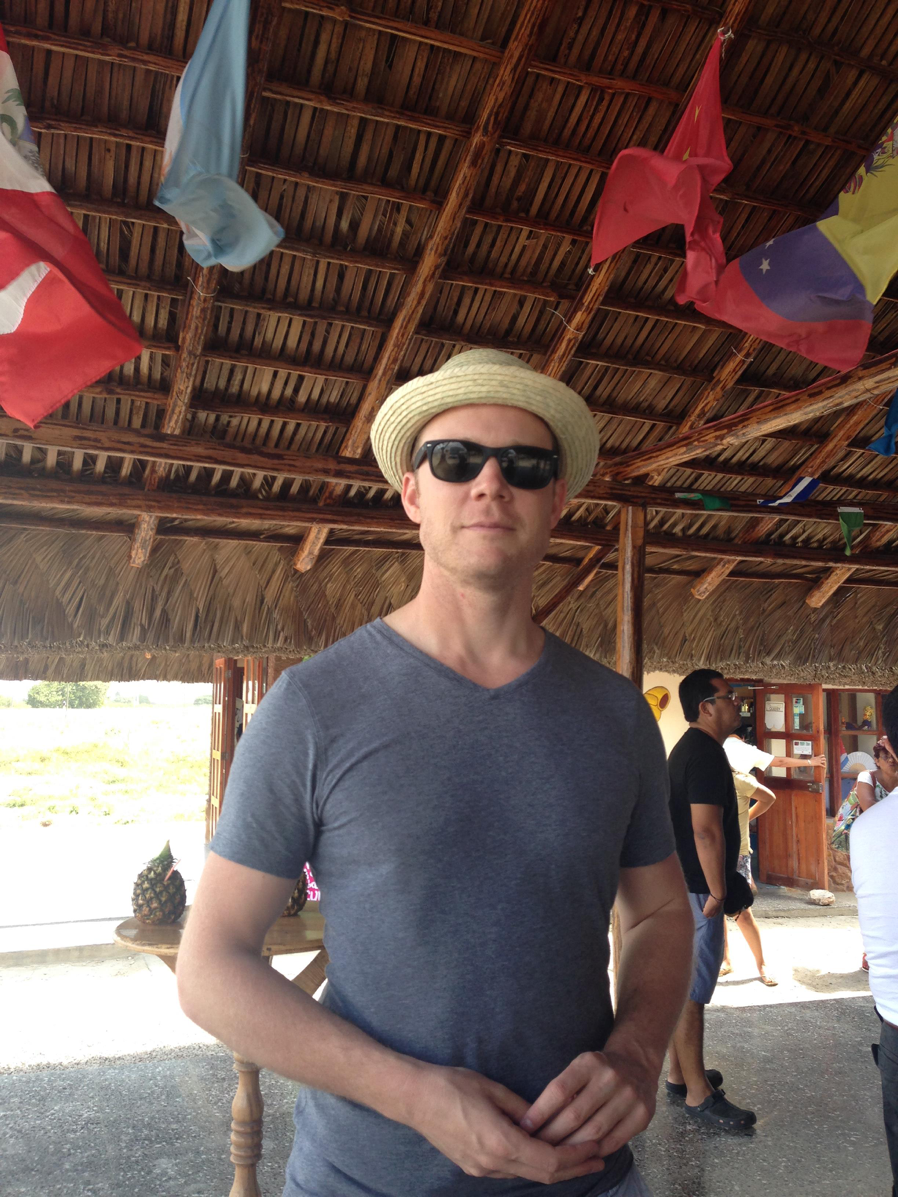 Eventually a late-model Audi came to our rescue. We gave Massimo what we owed him plus tip and wished him well. Then we continued our trip.

In Varadero we had a seafood lunch – with music, of course: 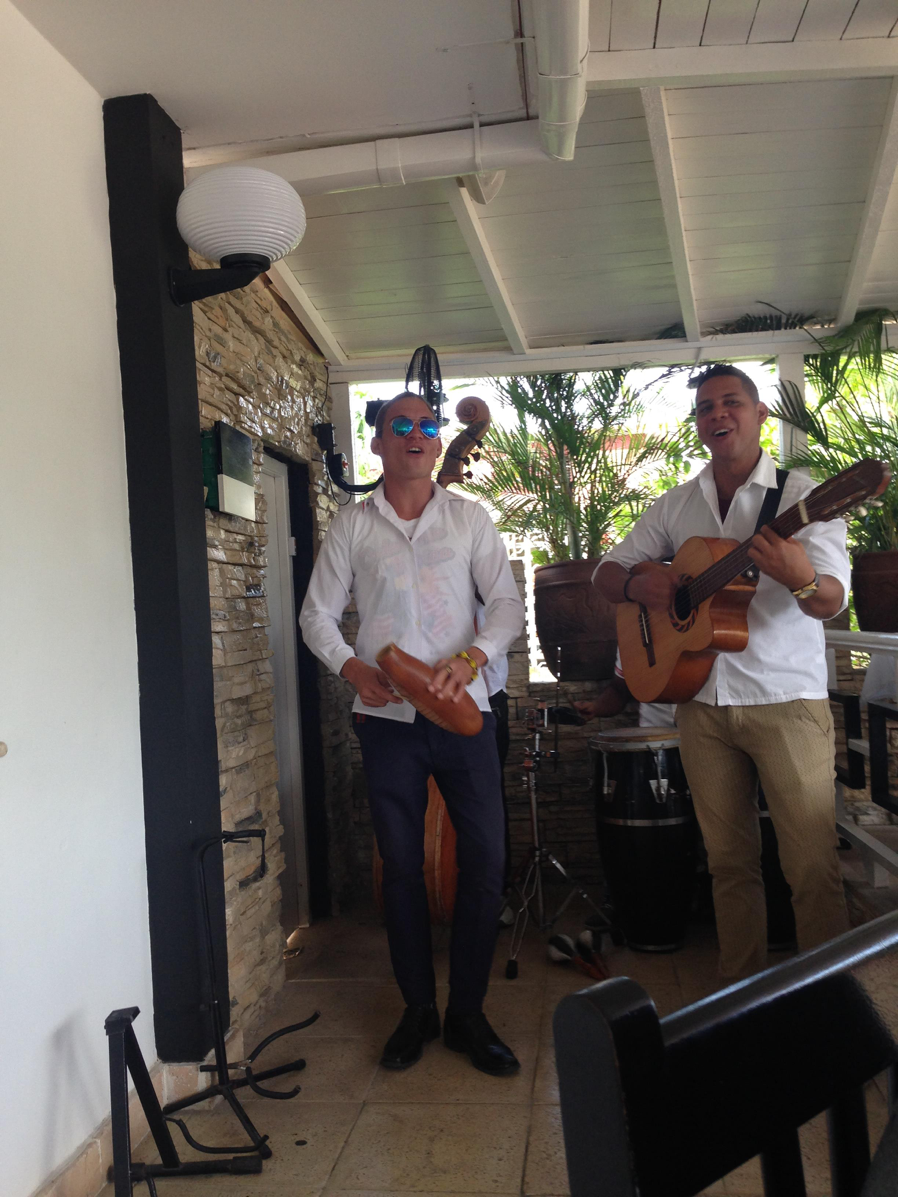 The percussion instrument in the lead singer’s hand is called guiro, a serrated gourd played by scraping a stick along the surface

After lunch Phillip went to the beach to catch some rays while David and I shopped art galleries. David was interested finding arte naïf and came up with a winner: Xavier Isodoro.

Here’s an example, but unfortunately not by Isidoro because I can’t find his work anywhere online: 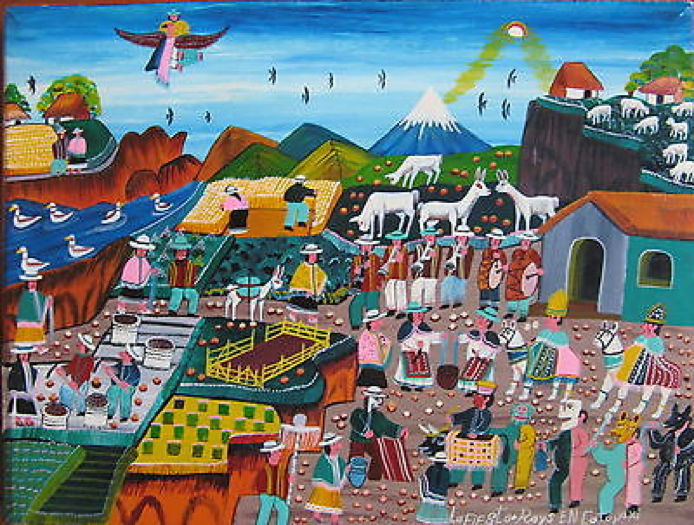 To my eye, what is distinctive about naïve art is its lack of one-point perspective, which was developed in the Renaissance. The painting, below, originally attributed to the Early Renaissance Italian painter Piero della Francesca, illustrates the concept. It has a single vanishing point to which all lines recede:

“View of an Ideal City”

Naïve art, by way of contrast, has any number of perspectives, and in this sense resembles pre-Renaissance art, like this 15th-century illustration: 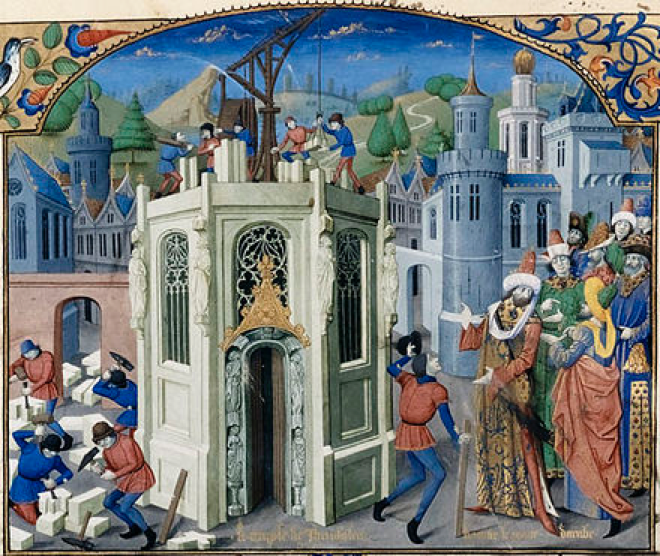 Objects in the background are smaller than those in the foreground, but there is no one focal point

Back to Cuba. We left Varadero around 6:00 pm and decided to breeze through the town of Matanzas, which was on our way, just to see what we could see.

What a pleasant surprise!

The main square, Parque de la Libertad, was beautiful. Because we caught it at night, my pictures aren’t very good, and so I pulled this view from online. 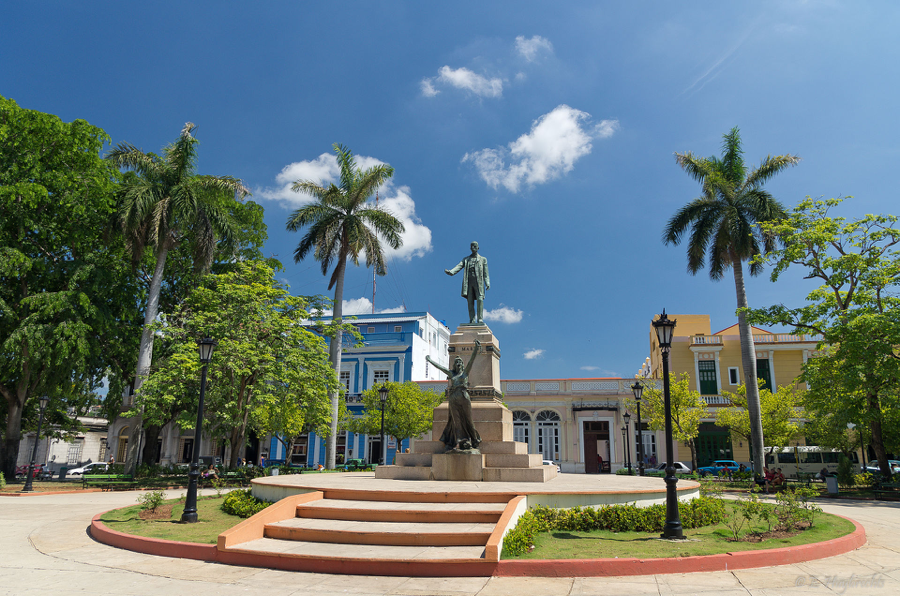 The yellow building behind the statue is a lovely hotel that looks like this at night: 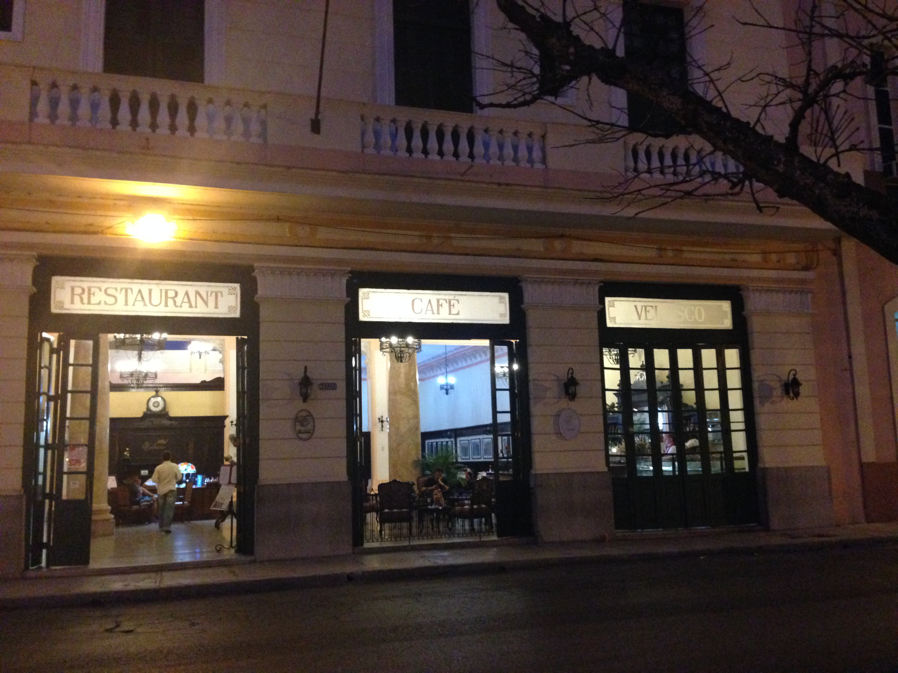 After visiting the dusty, slightly back-watery communities of San José, Güines and Zaragoza the day before, the visit to Matanzas showed us the larger sized towns in Cuba have appeal.

On the less appealing side of things, the name Matanzas means ‘slaughters’ in Spanish. Because I don’t want to know the reason it got this name, I did not look up the history of this town. 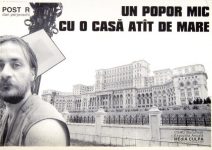 Bucharest Churches: From Mini to Massive 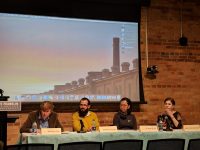