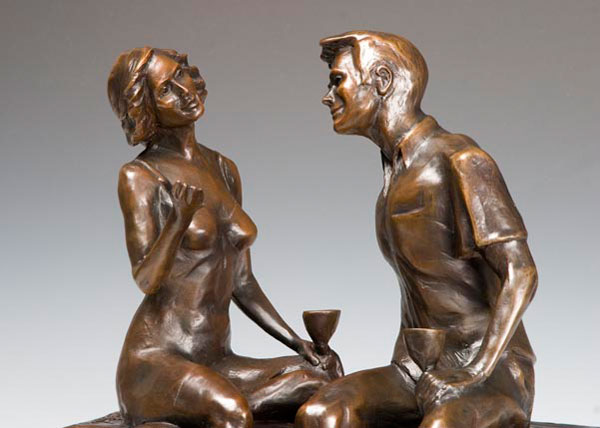 This post is a companion piece to Interior Monologue and focuses on authentic dialogue, particularly as it pertains to the romance genre.

Here’s a shocker: when writing a scene of dialogue there actually has to be dialogue.

Sound absurd? Indeed, it does. But I can’t tell you how many times I’ve encountered a story where either the hero or the heroine and sometimes both can’t seem to find anything to say to one another. They end up with awkward conversations that don’t have a lot of dialogic exchange and, as a result, end up with an excess of interior monologue.

There are only two exceptions to my first tip:

One: if one or both characters are portrayed as being awkward, and thus their lack of conversational ability is in character for them.

Two: if one or both characters are Millennials, and thus they communicate more comfortably through social media, while face-to-face encounters may not be the most natural for them.

You, the writer, can have lots of fun creating awkward conversations for these two exceptions.

Especially early on in your story do not make the hero or heroine tongue-tied because of their overwhelming attraction to the other character.

This excuse has become pretty much the conversational equivalent of fridging and is a sign of lazy writing.

There may be a way to make this I-can’t-speak-because-s/he-is-just-so-sexy trope work at this point. However, it would have to be pretty darned well thought out.

Of course your characters can become tongue-tied for all sorts of reasons. Being at a loss for words happens. It is the author’s job to make sure the loss makes sense and furthers the understanding of both the character and the situation he or she is in.

Use a car scene well.

The classic of the classic. Hero and heroine together and alone in a confined space. Perfect opportunity to rev up the relationship through dialogue.

Here is the scene I read this morning that drove me to write this blog. The hero and heroine are on their first date. He is driving her to his favorite restaurant. On the way he asks her the soft-ball question about her career choice: “Why recruiting?” She answers with two sentences, the gist of the first one being “Because I like connecting people.” And that was the end of that. Next came a description of where they were on the highway.

Note the irony that she likes connecting people but can’t make a conversational connection with the hero. (You already know the reason why: she’s overwhelmingly attracted to him.)

A page later, she takes her own stab at conversation with, “So, tell me about yourself.”

His answer? “You already know all about me from the Internet.”

As the self-appointed conversational line judge here, I call this ball out of bounds. Everyone already knows all about everybody from the Internet. You don’t have to be a big shot like the hero to have a significant Internet presence. The idea was that the hero didn’t want to talk about his dark formative years. So I get it, but unfortunately his dismissive response shut down rather than furthered the conversation.

Bottom line: This scene undercut its potential and did not allow the basically worthy characters to engage with one another. Which leads me to:

When an otherwise socially adept character can’t find anything to say, it’s not the character’s fault, it’s the author’s.

When you, the author, put your hero and heroine face to face and you’re suddenly at a stand-still, don’t project your mind-boggle onto them. Instead:

Third, give your characters room to chatter in your brain: “I don’t know what to say.” “I’m nervous.” “Why can’t I think of anything to say?” and get it out of your system.

Fourth, remember that the hero and heroine are the characters who come up to scratch in any given situation, and that you chose these two for a reason. Take the time you need to determine what you consider to be their most basic qualities. Then, in this potentially awkward face-to-face situation, get them to think, act and speak in a manner that conforms to these basic qualities.

If you are at the beginning of your story, you don’t yet know your characters very well. Their dialogic interactions are your opportunity to find out who they are individually and as a couple.

Think of writing dialogue as chain-smoking. You light the tip of the new line from the butt of the old.

Take the case of “I like connecting people,” above. That’s actually a wonderful opener. After the heroine makes the statement, she could volunteer her favorite story about the most satisfying connection she ever made or the hero could ask her about it. This could lead them into a discussion of a time she tried and failed to make a good connection. Or anything else, for that matter. There is rich potential for flirtatious banter around the idea of connecting.

The seeds of the next conversational bit are already in the line of dialogue you are currently writing. Your job is to find those seeds and then plant them so that a new line can sprout.

If it’s choppy, unrealistic or not working in some other way, you should be able to hear it.

Study the dialogues of your favorite authors.

How long or short are they, as a rule?

Do they have a characteristic rhythm?

What kinds of information come through dialogue as opposed to, say, interior monologue or straight narration?

In what ways do the lines of dialogue reveal character?

How do the characters behave while they are speaking?

I’ve always enjoyed learning from authors who are better than I am and who, in turn, make me a better writer.

It is crucially important for your hero and heroine to sound different.

What characters say is equivalent to their verbal fingerprints. They should make different vocabulary choices and have different syntactic patterns.

Authors sometimes give a character an oddball cuss word to create verbal daylight between characters. I’m okay with this technique, but I wouldn’t want to rely solely on it.

Two monologues on a subject will share fewer words in common than a dialogue on the same subject.

Yes, your characters should sound different, but good dialogue depends on good listening. So it is the case when people are really engaged in conversation, they pick up on each other’s phrasing, even when they’re arguing. (Maybe especially when they’re arguing? “Oh, so you say your mother is a saint?!”) In other words, don’t worry if, in the dialogue, the hero and heroine are trading words or phrases. That’s natural. Just make sure there are other ways they distinguish themselves verbally.

Writing good dialogue is an art.

If you listened to a recording of an actual conversation, it is likely not one you would ever want to read. People start, stop, backtrack, leave thoughts unfinished, talk over one another and even make grammatical mistakes far more than any of us realize.

I realize it only because I’m also a linguist, and I’ve read enough conversational analysis to know it’s true. And yet a part of me (the novelist?) believes I talk in complete sentences and don’t make grammatical mistakes.

So, the real point is that you don’t actually want to write authentic dialogue, you only want it to sound authentic. The best way to do that is by following Tips #1-9.