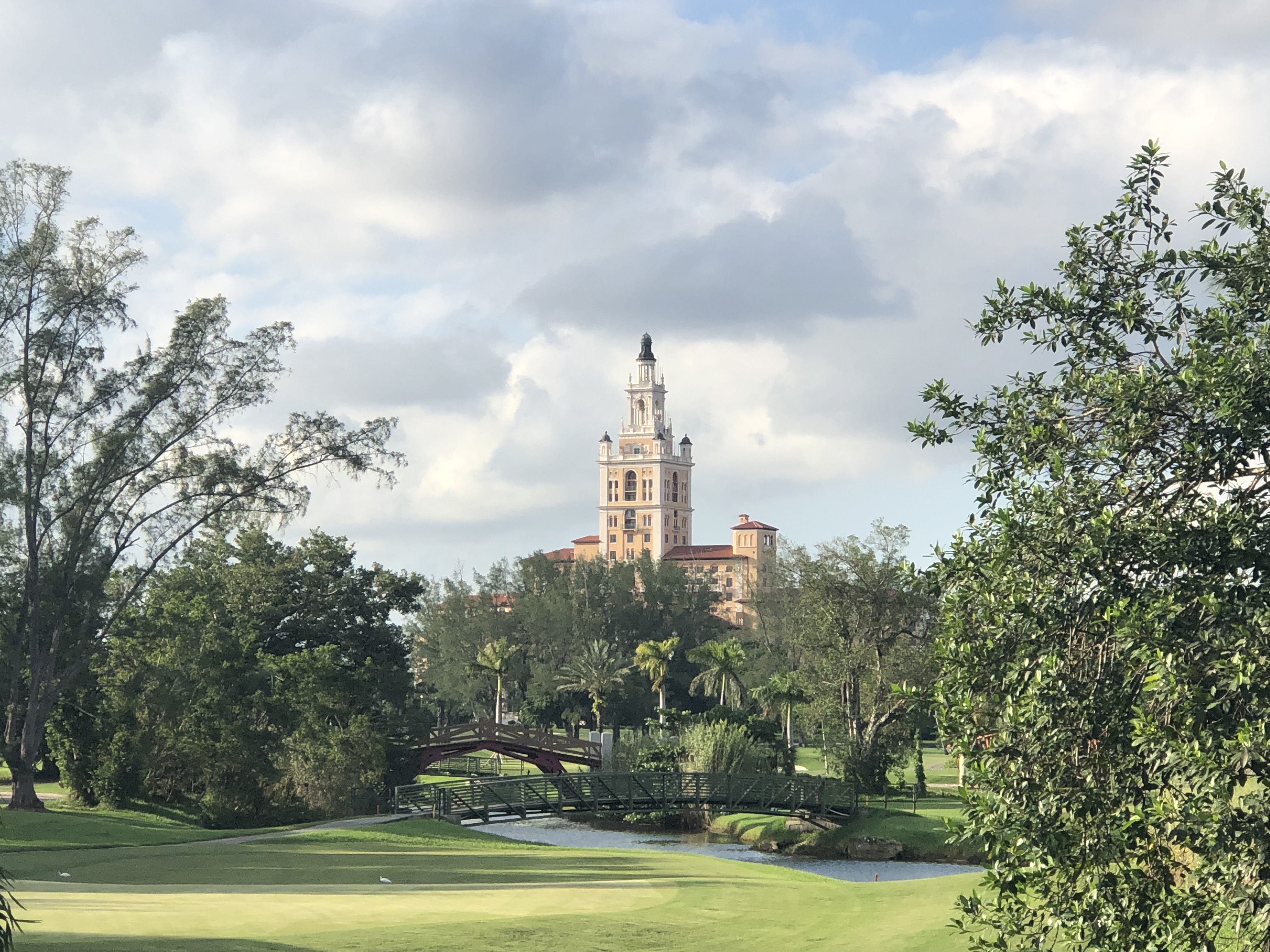 Title Image: The Biltmore Hotel in Coral Gables seen from one of its two 18-hole golf courses.

I’m living in Coconut Grove for the semester. One neighborhood to the west is Coral Gables. I explored it on Sunday. For the title image I chose the Biltmore Hotel. It was a tough choice. I could have easily chosen a street of leafy green tunnels created by mature banyan trees. They are as iconic of Coral Gables as is the Biltmore. 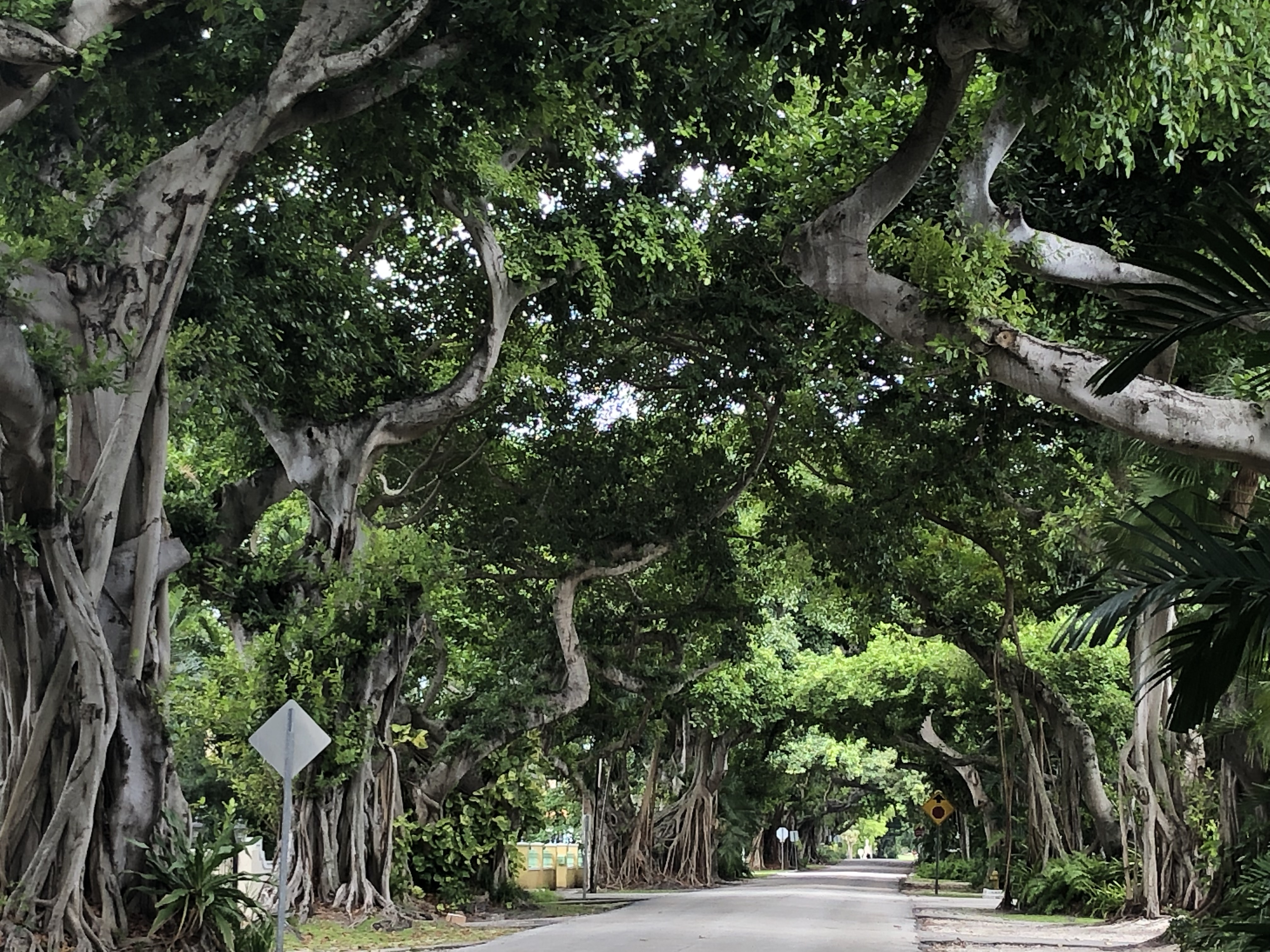 This town is the brainchild of George Merrick (1886-1942) after he inherited an orange grove from his father. He had the bright idea to build a planned community for New Yorkers looking for winter homes. He had the bad luck to have had this idea in the early 1920s. First came the real estate bust in 1925. Then came the Great Miami Hurricane of 1926.  Long story short: by 1928 Merrick had lost his shirt – along with his position in town, his prestige and everything else.

By 1940, and after yet another failed real estate venture in the Florida Keys, Merrick’s financial situation was so dire that he took the exam to become Miami Postmaster. He received the highest grade and, indeed, became Postmaster. He died two years later.

The George Merrick House is on Coral Way: 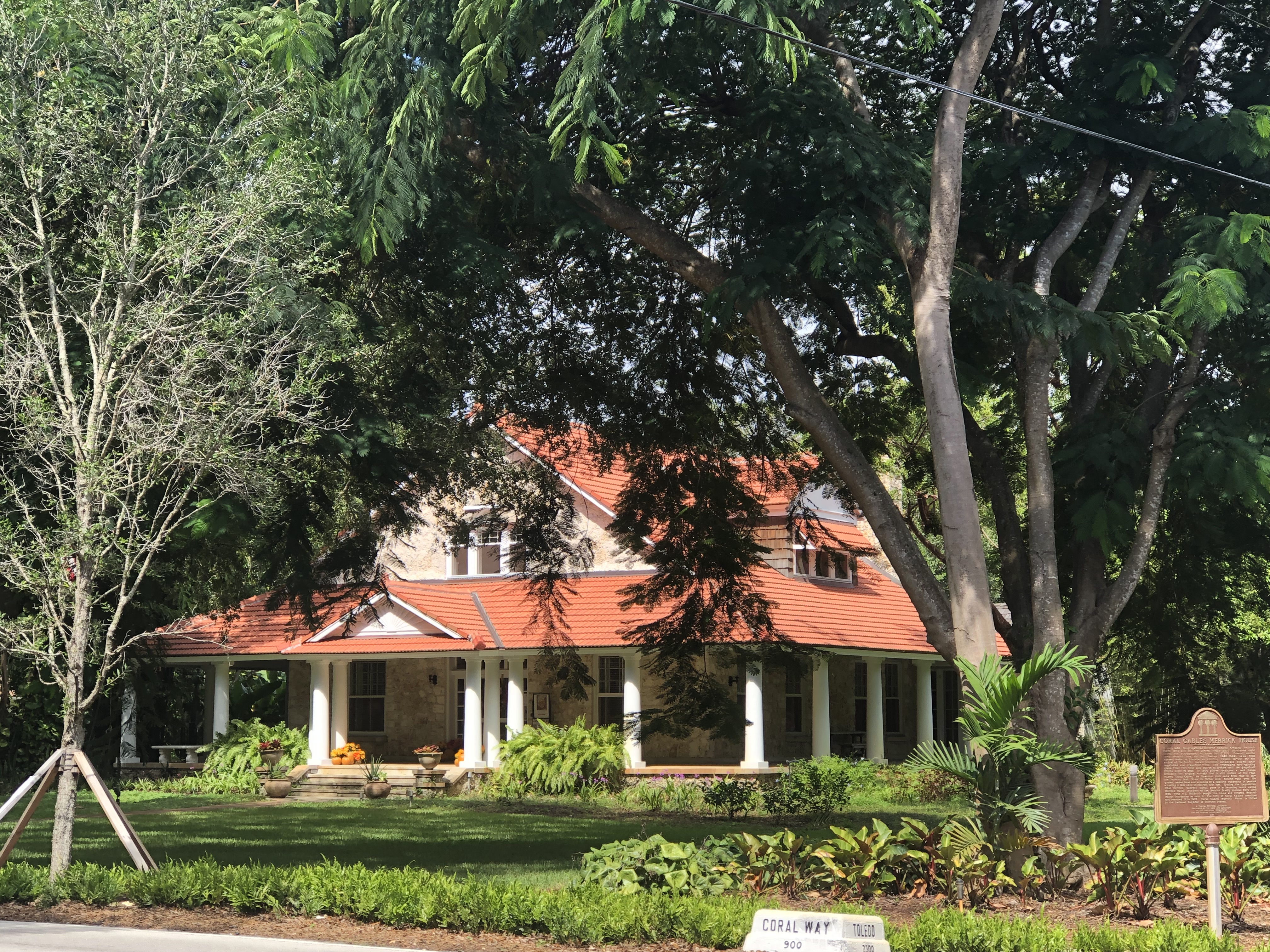 Despite Merrick’s failures during his lifetime, his legacy here is strong.

#1 The very name of the city derives from his house. Look closely at the second-story gable. It is rock, that is, oolitic limestone, namely coral. Likely from the quarry that became the Venetian Pool, see below. Thus, Gables that are Coral.

#2 He donated 600 acres (2.4 square kilometers) to create the University of Miami. It now ranks highly as an R1 research institution.

#3 Although Merrick’s ultimate vision for Coral Gables did not come to fruition, the imprint of it is everywhere. He initially imagined an architecturally homogeneous town in Spanish style. It didn’t quite happen that way. But, there is still this: the Alhambra Water Tower: 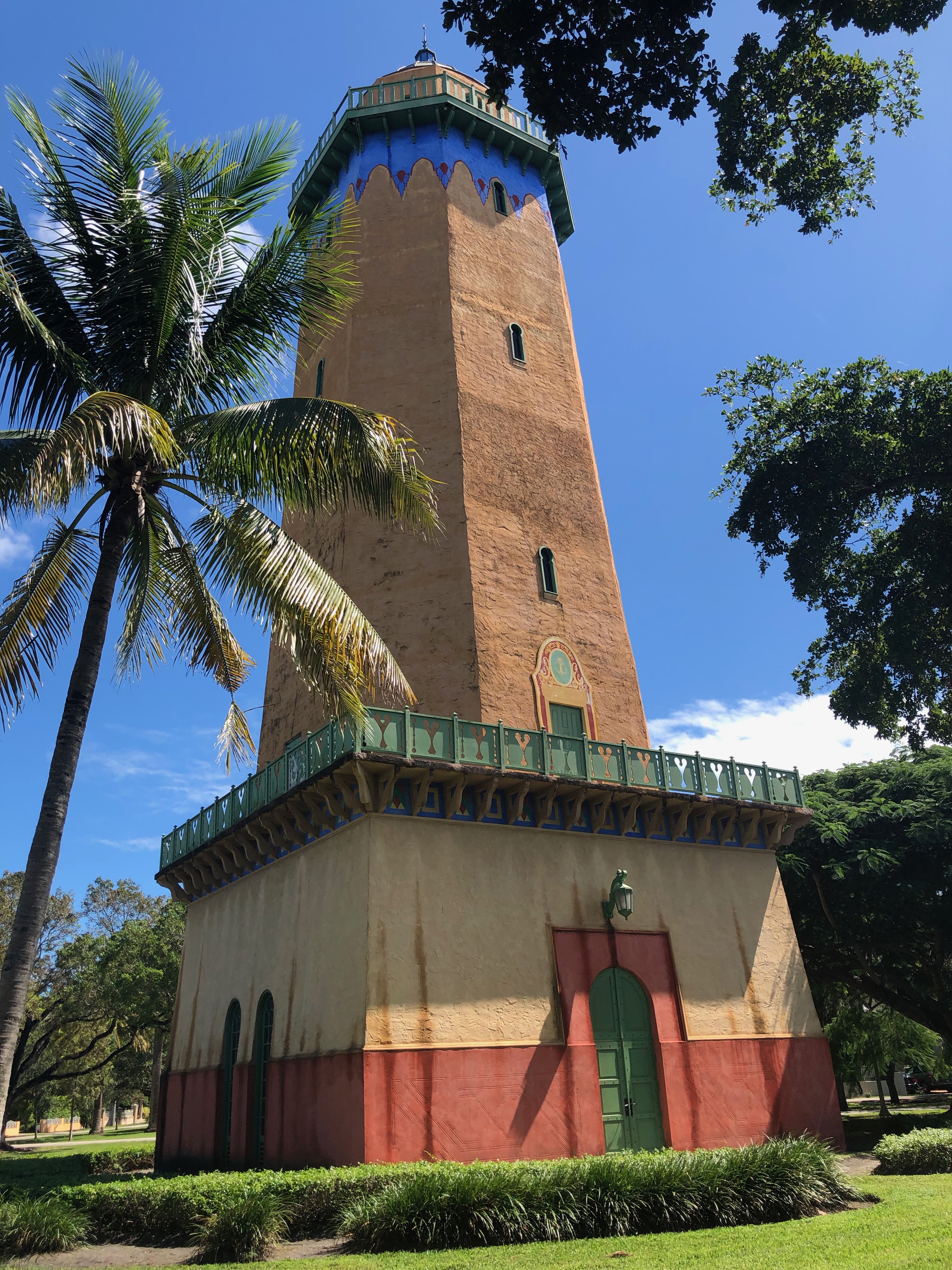 The streets tell a similar story: Granada (speaking of the Alhambra), De Soto and Ponce de Leon Boulevards, along with Valencia, Andalusia and Catalonia Avenues, among many others.

Merrick, along with a partner, oversaw the building of the Biltmore Country Club in 1926. 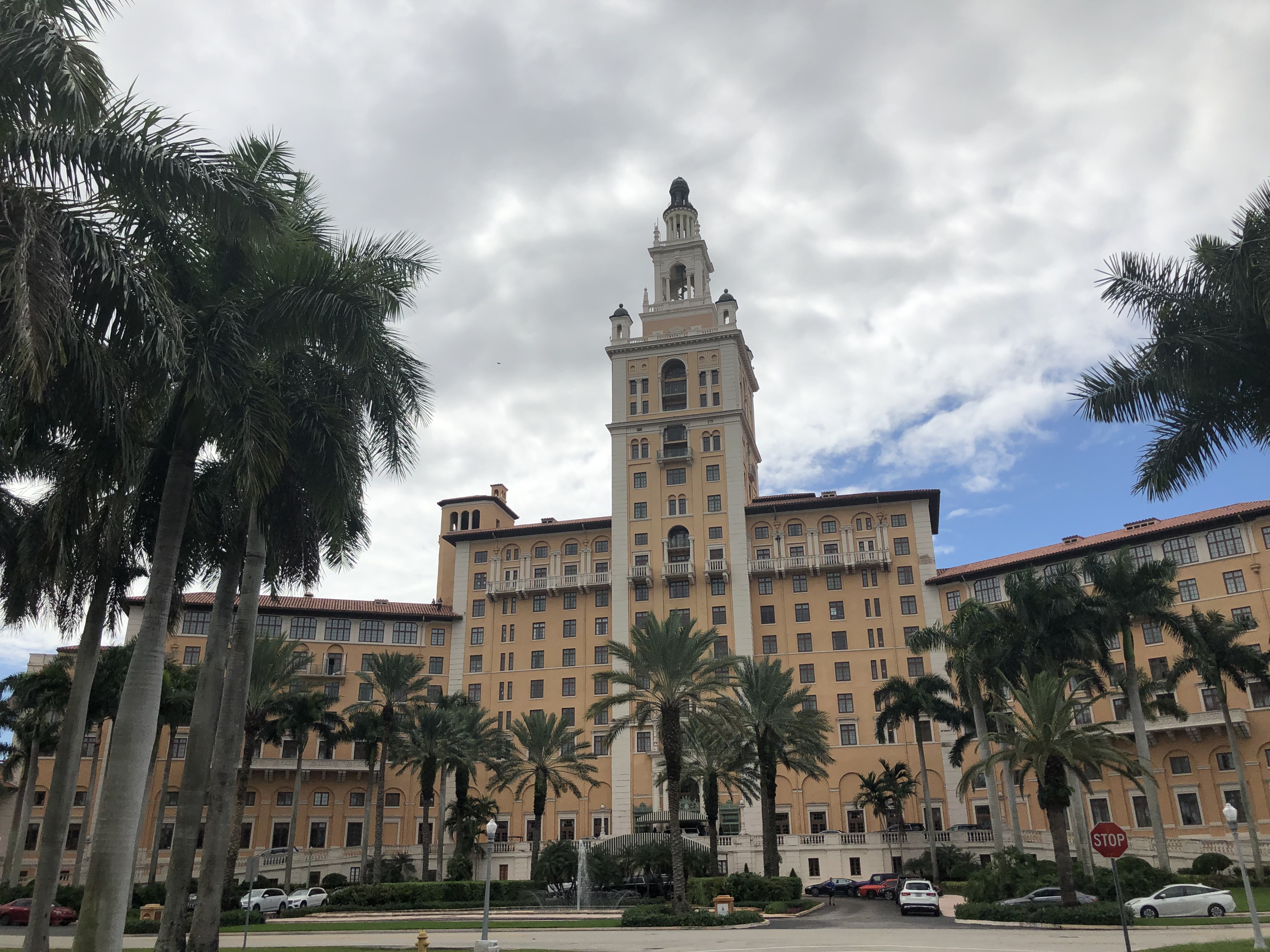 The model for the Biltmore’s tower is Giralda, the medieval tower of the Cathedral of Seville. So, yes, Merrick did see through some of his vision for Spanish-styled architecture.

The Biltmore is known for its two sumptuous golf courses: 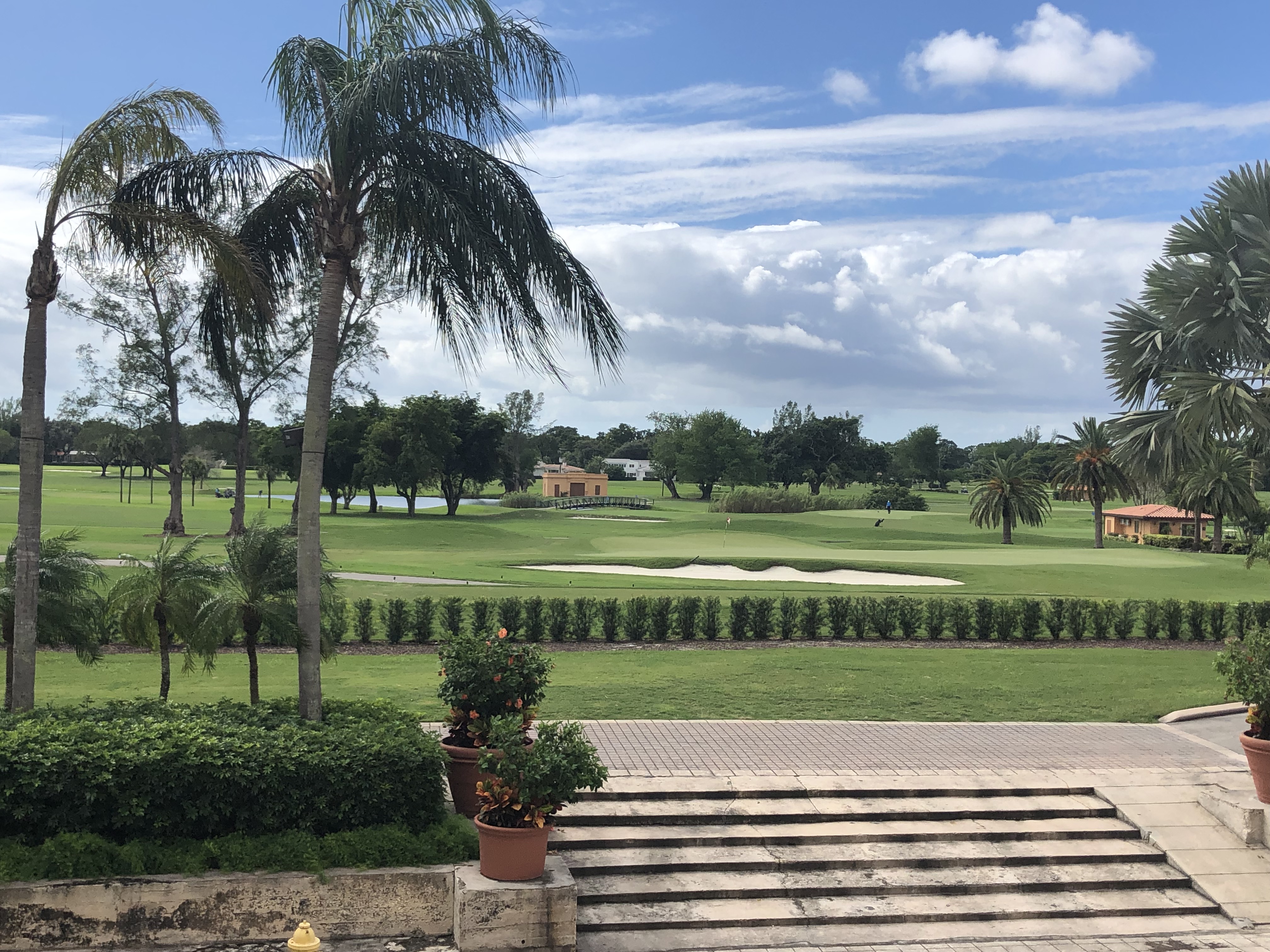 and its luxurious swimming pool: 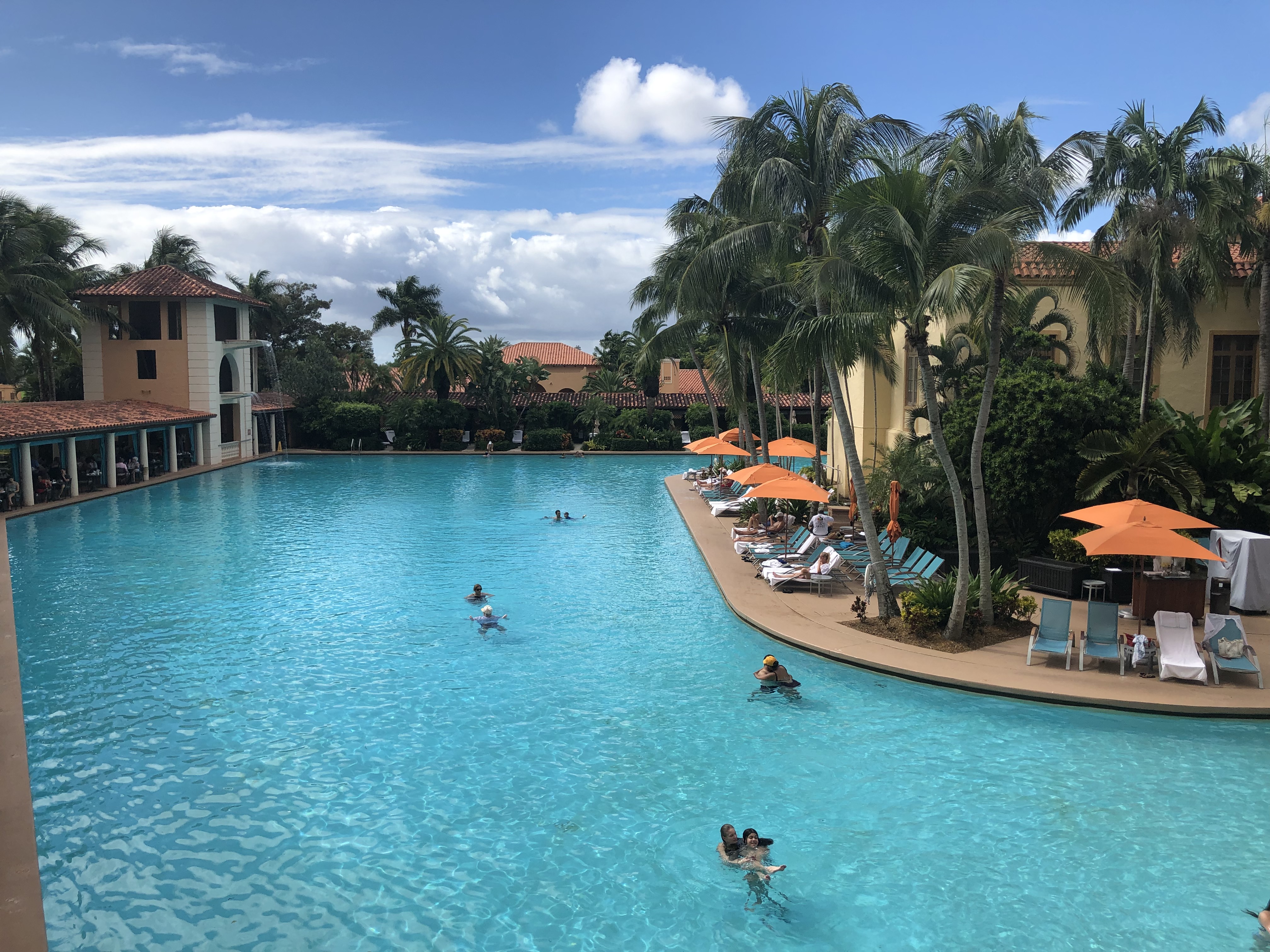 Not too many blocks away from the Biltmore is another appealing swimming hole, the Venetian Pool. 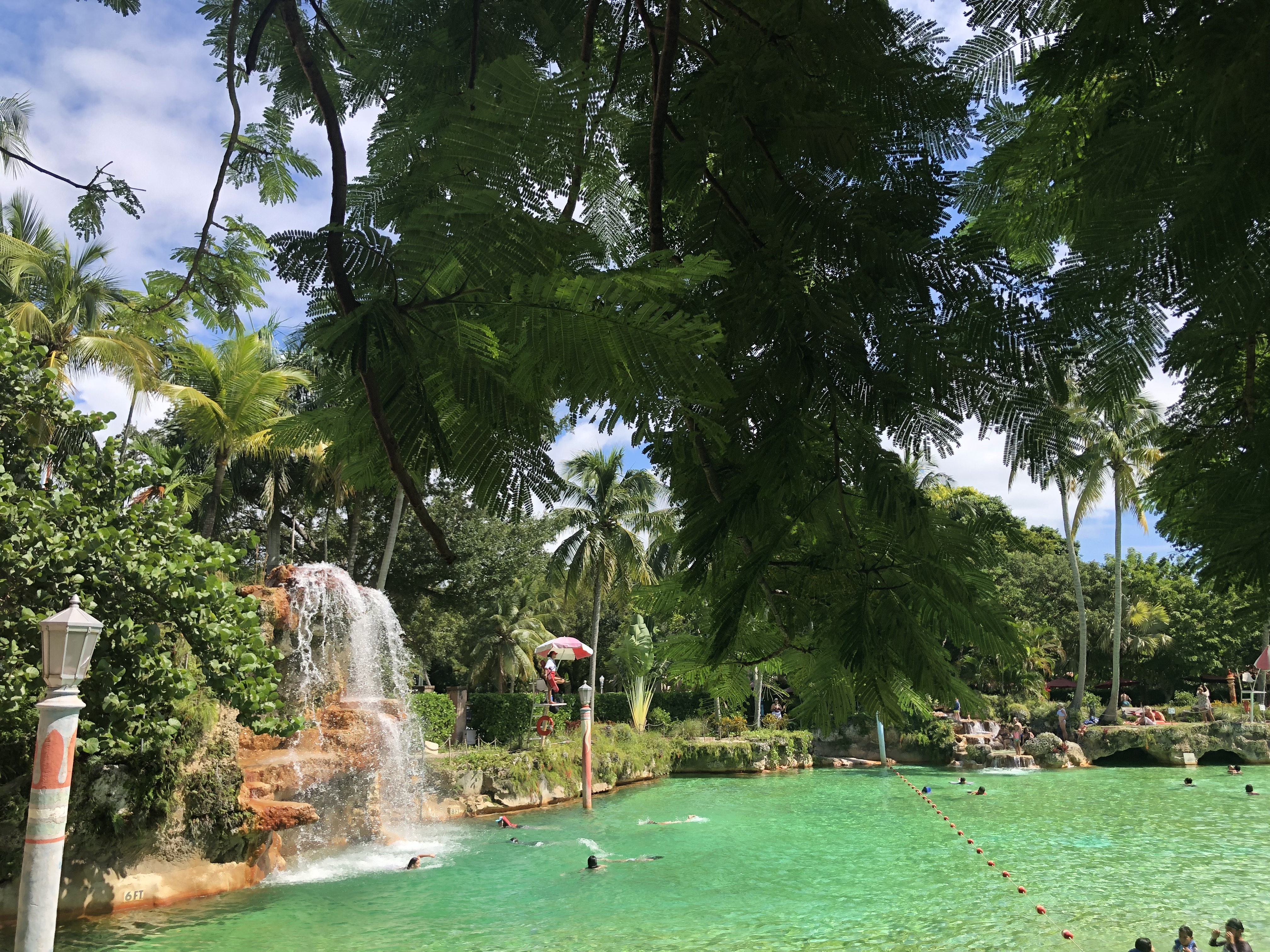 The Venetian Pool opened in 1924. It was originally a quarry providing limestone for the construction of early Coral Gables homes. And very likely Merrick’s with its gables, as I suggested, above.

Merrick, along with another partner, transformed the quarry into a space resembling a lagoon. He sold it to the City of Coral Gables in 1927. Another view: 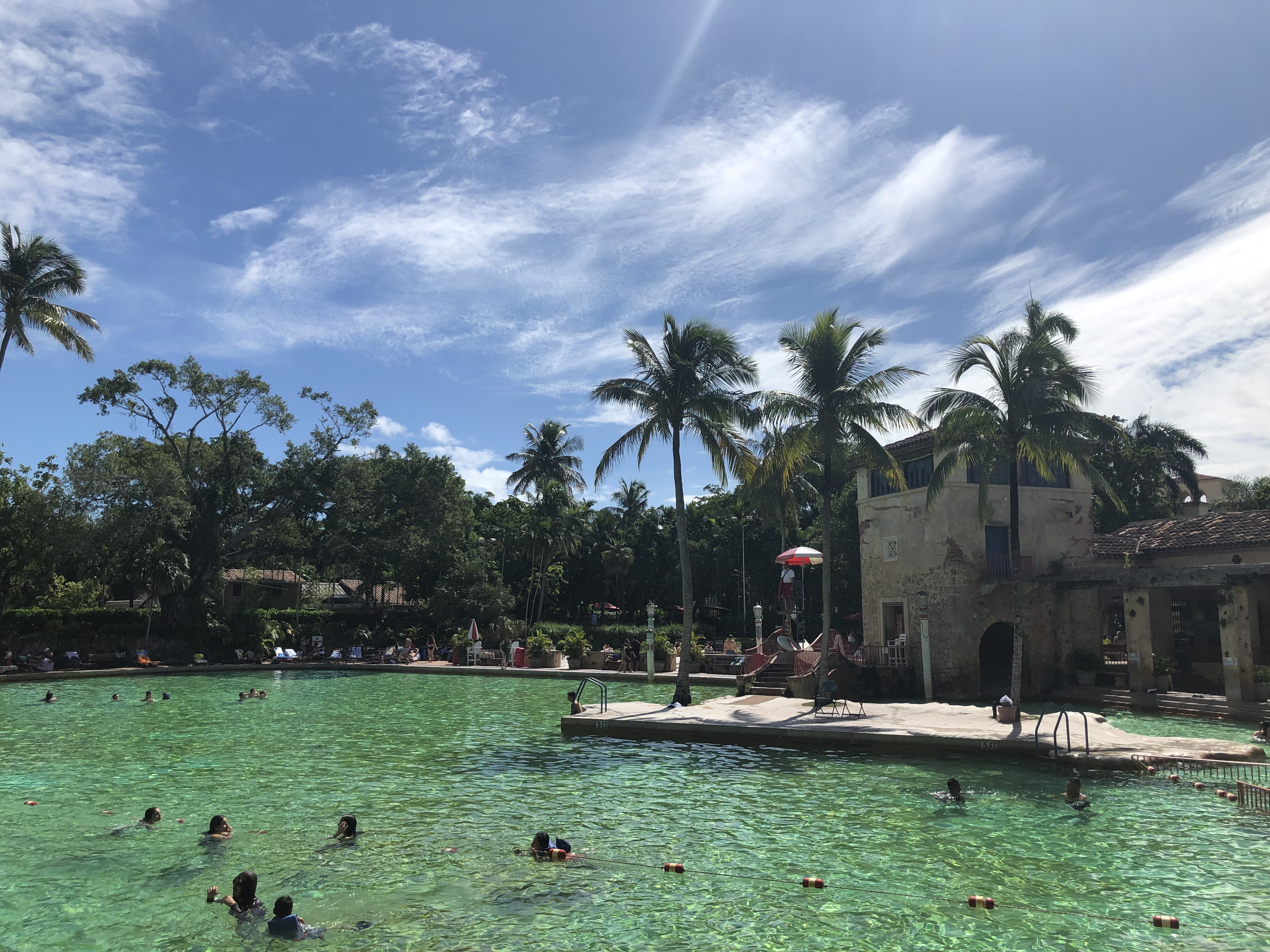 Downtown is bustling. Here’s a view looking down Miracle Mile, aka Coral Way, toward the Courthouse: 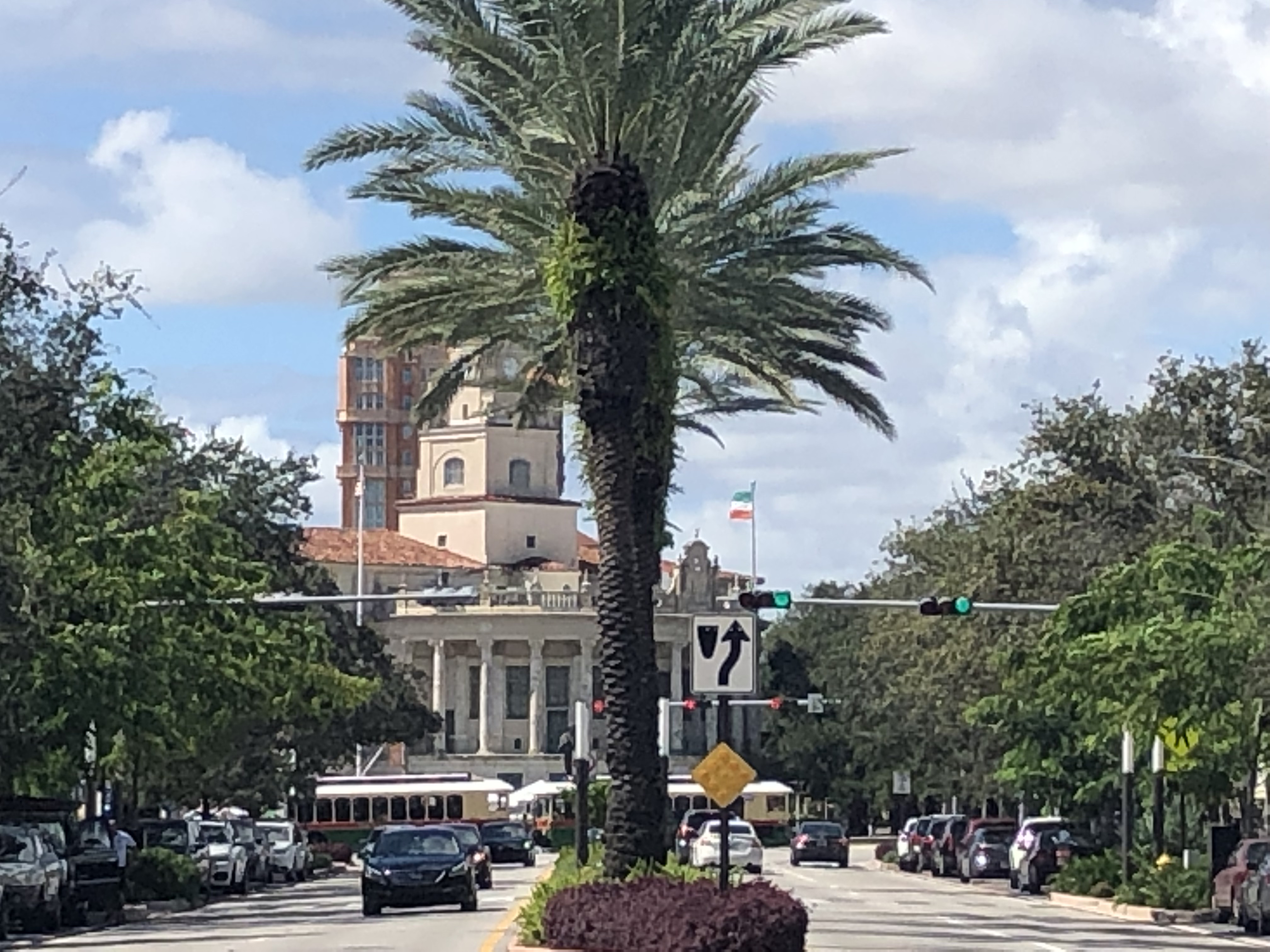 Around the corner is the Coral Gables Museum. Look at the two sculpted heads, below, on the building’s façade atop the columns to the right of the image. Try and guess the original purpose of the building. 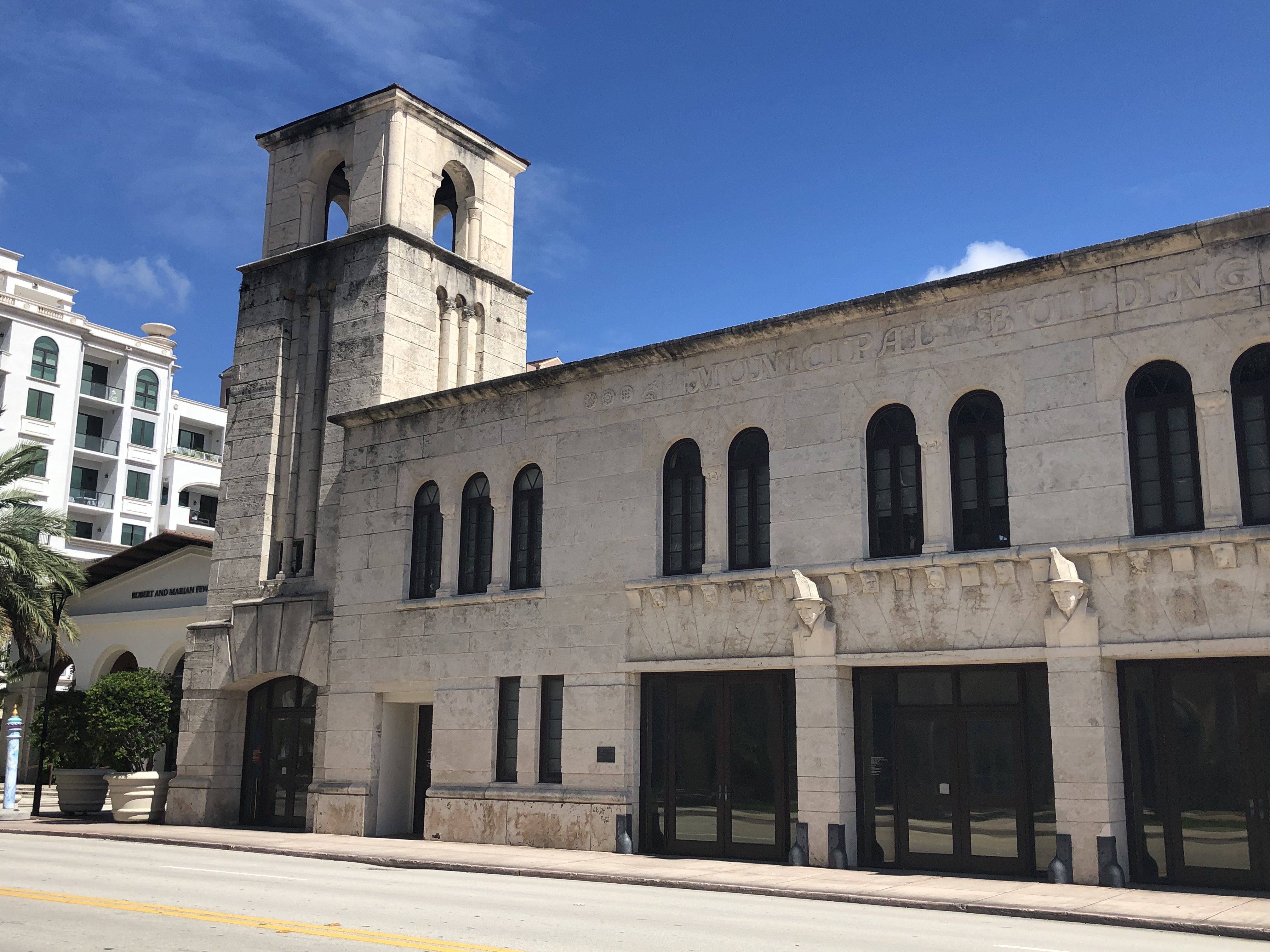 The sculpted heads are wearing fireman’s hats. This building used to be the Old Police and Fire Station. Nice touch!

I learned a lot about the town at the museum. Merrick’s original idea for uniform Spanish-style architecture did not survive because potential customers thought that a whole town of it it was too monotonous. So, he recruited architects to design villages from different architectural traditions. The whole world in one place. Or what we might call Disney’s Epcot Before Its Time. 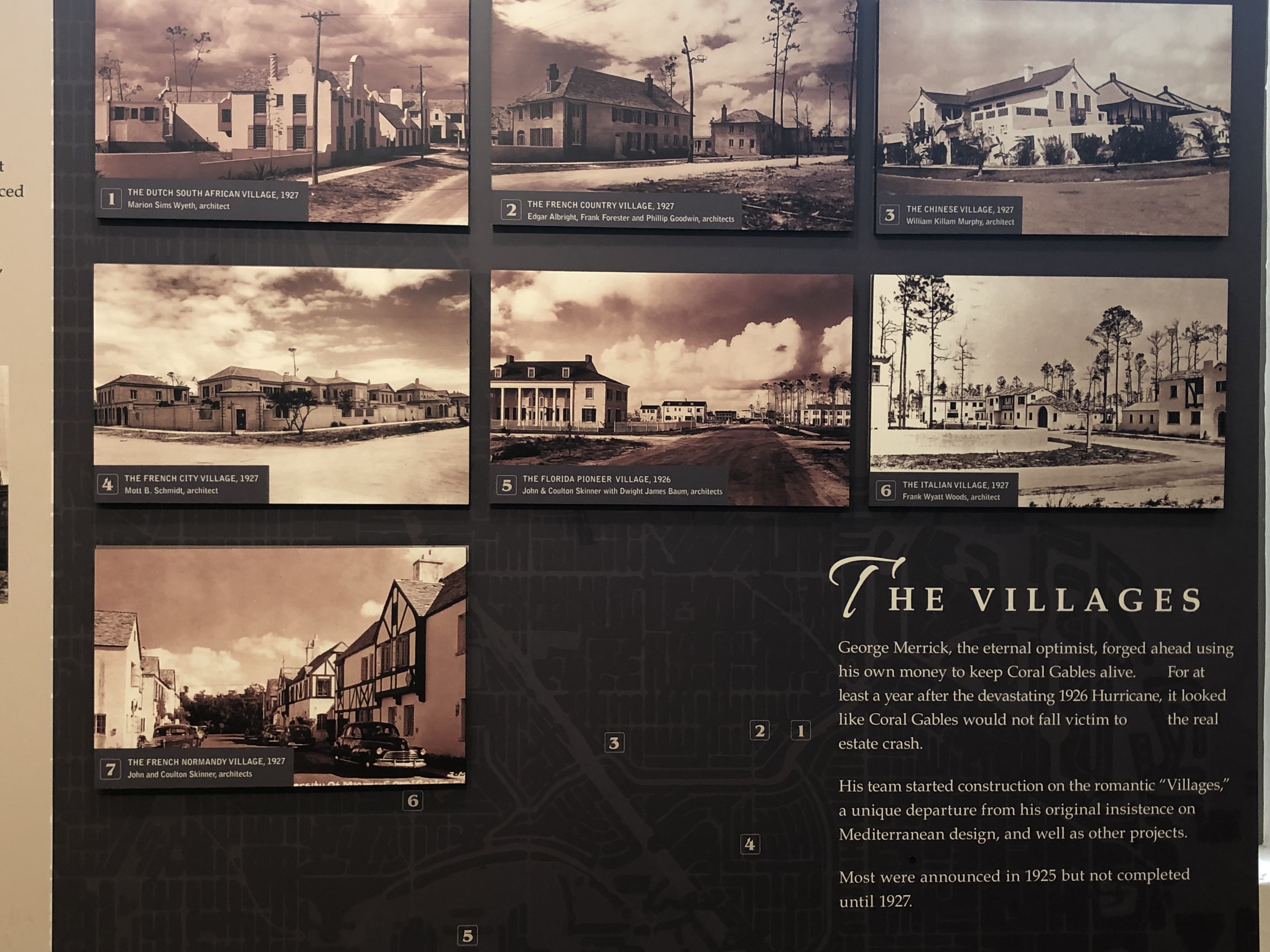 This display is in the Coral Gables Museum

How about the French Normandy Village from 1927? Here it is today:: 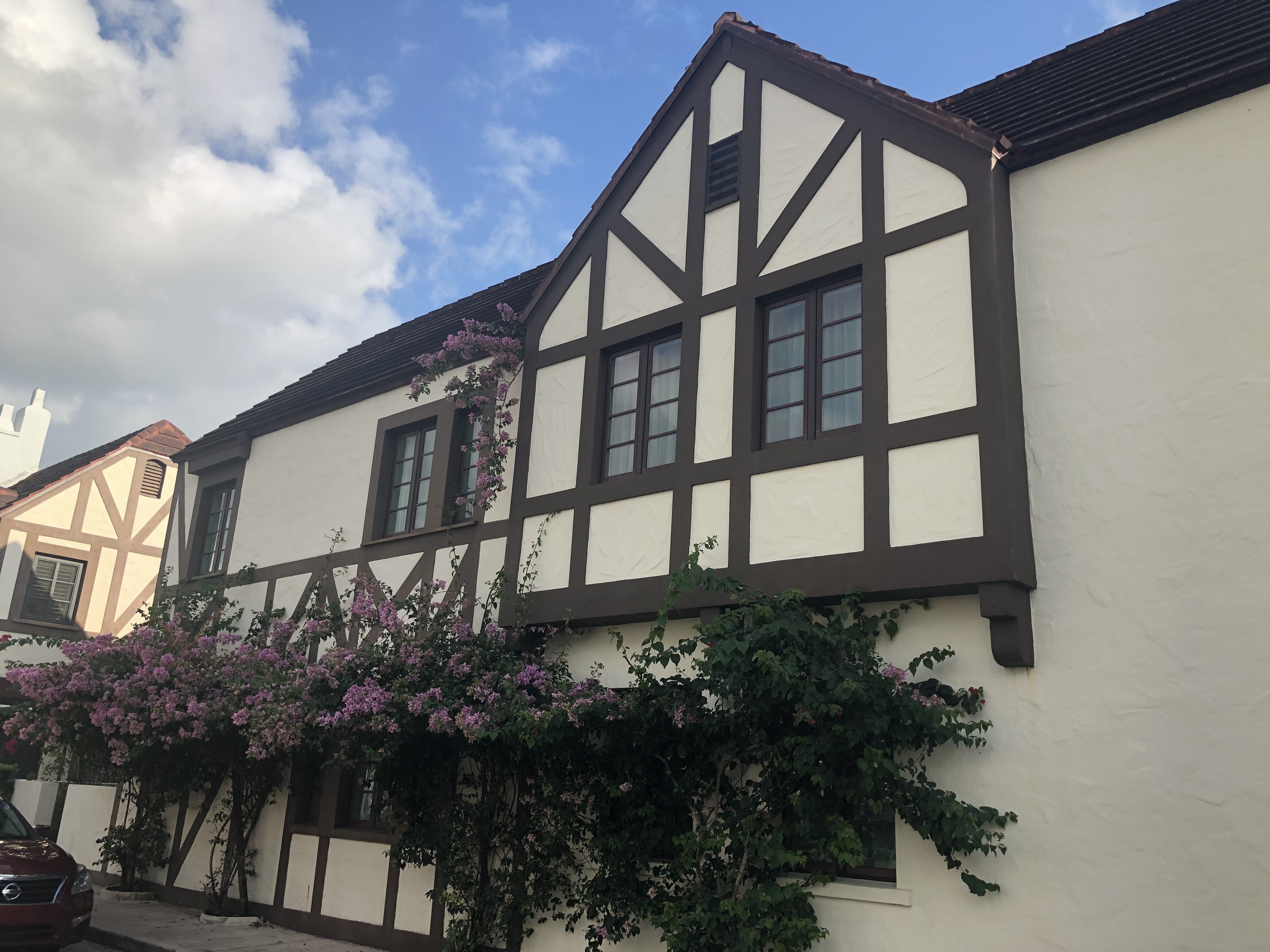 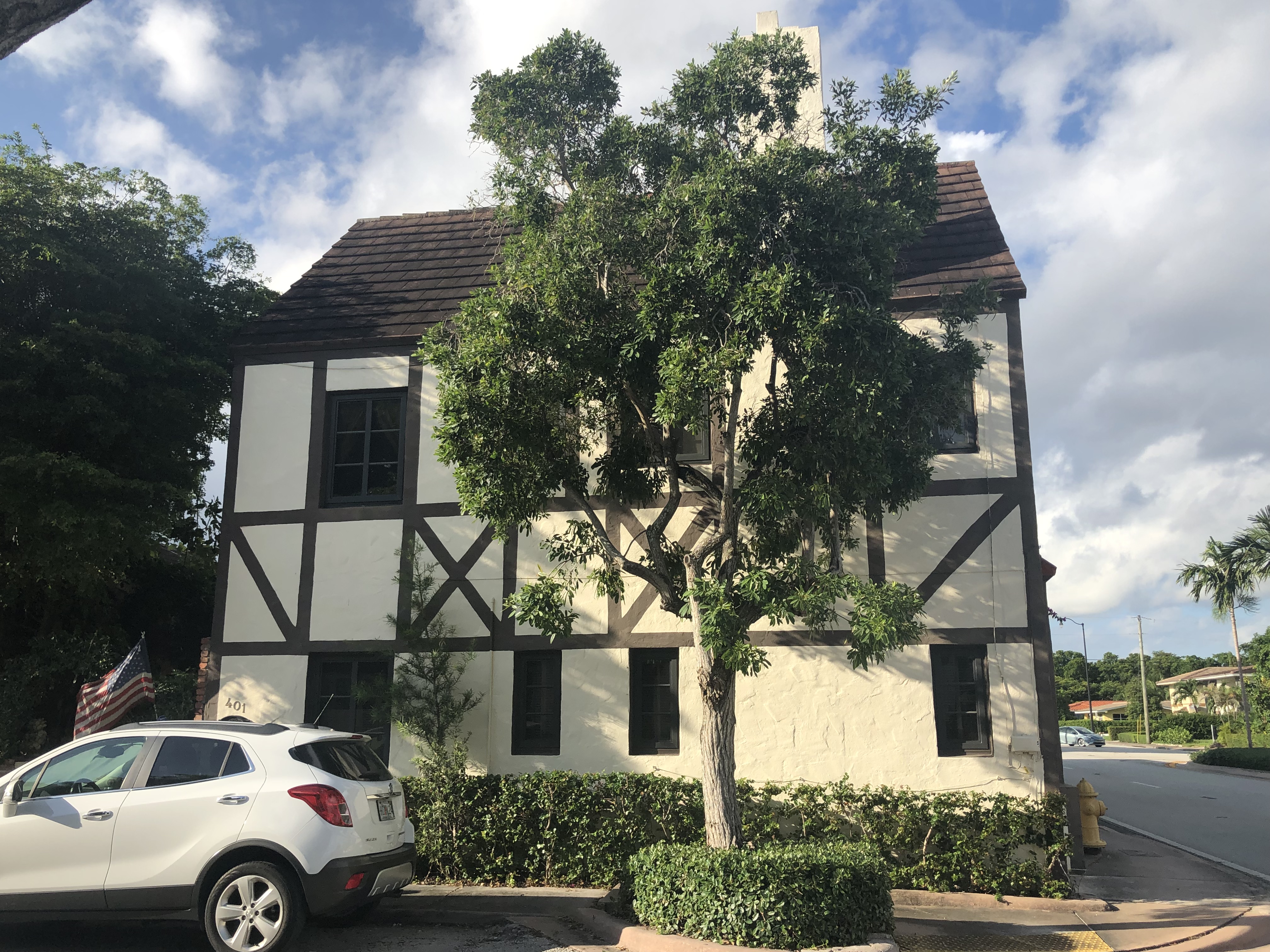 Okay, how about the Chinese Village? Now, 90 years later, in an otherwise unremarkable suburban neighborhood, I came upon this: 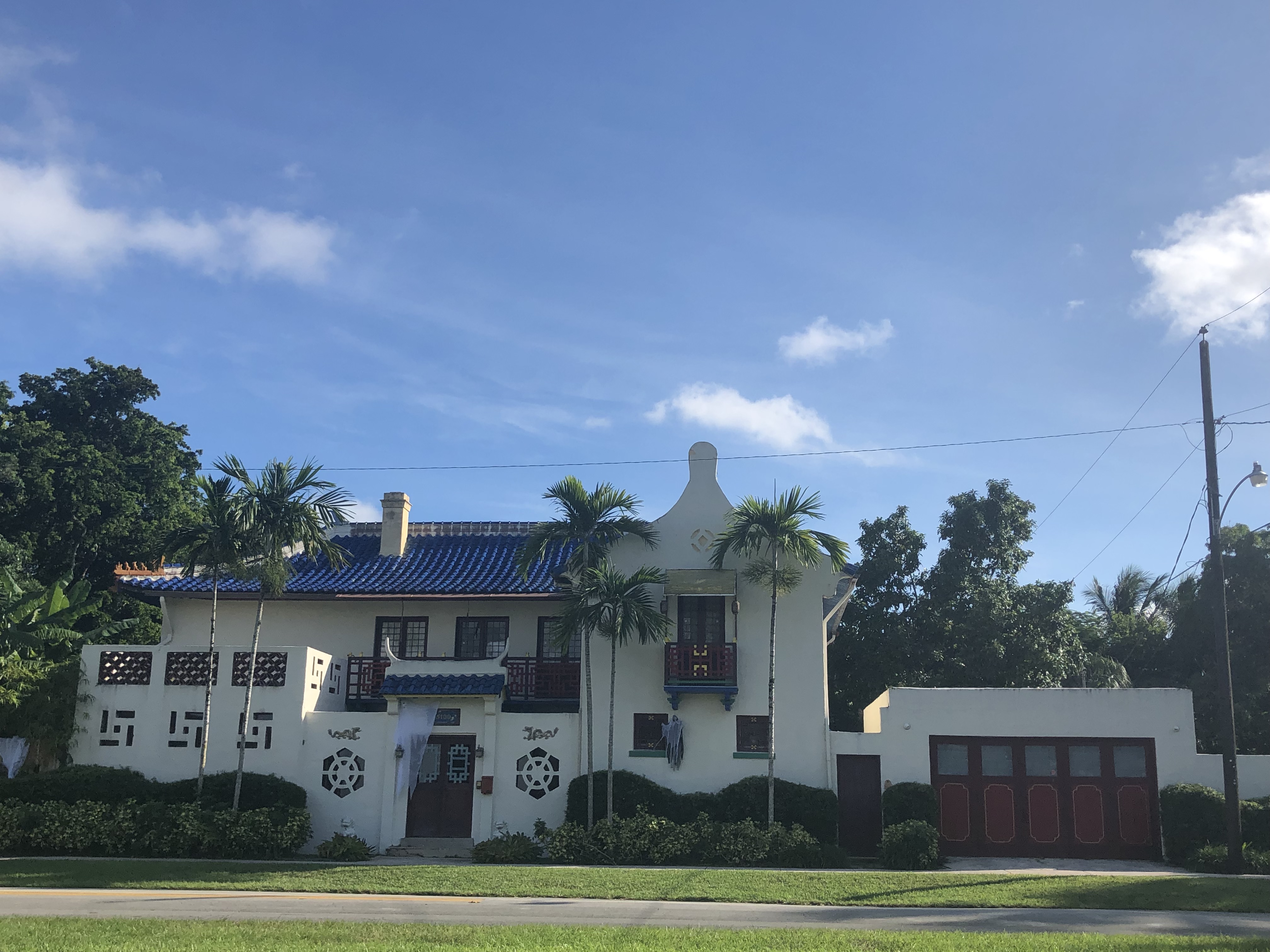 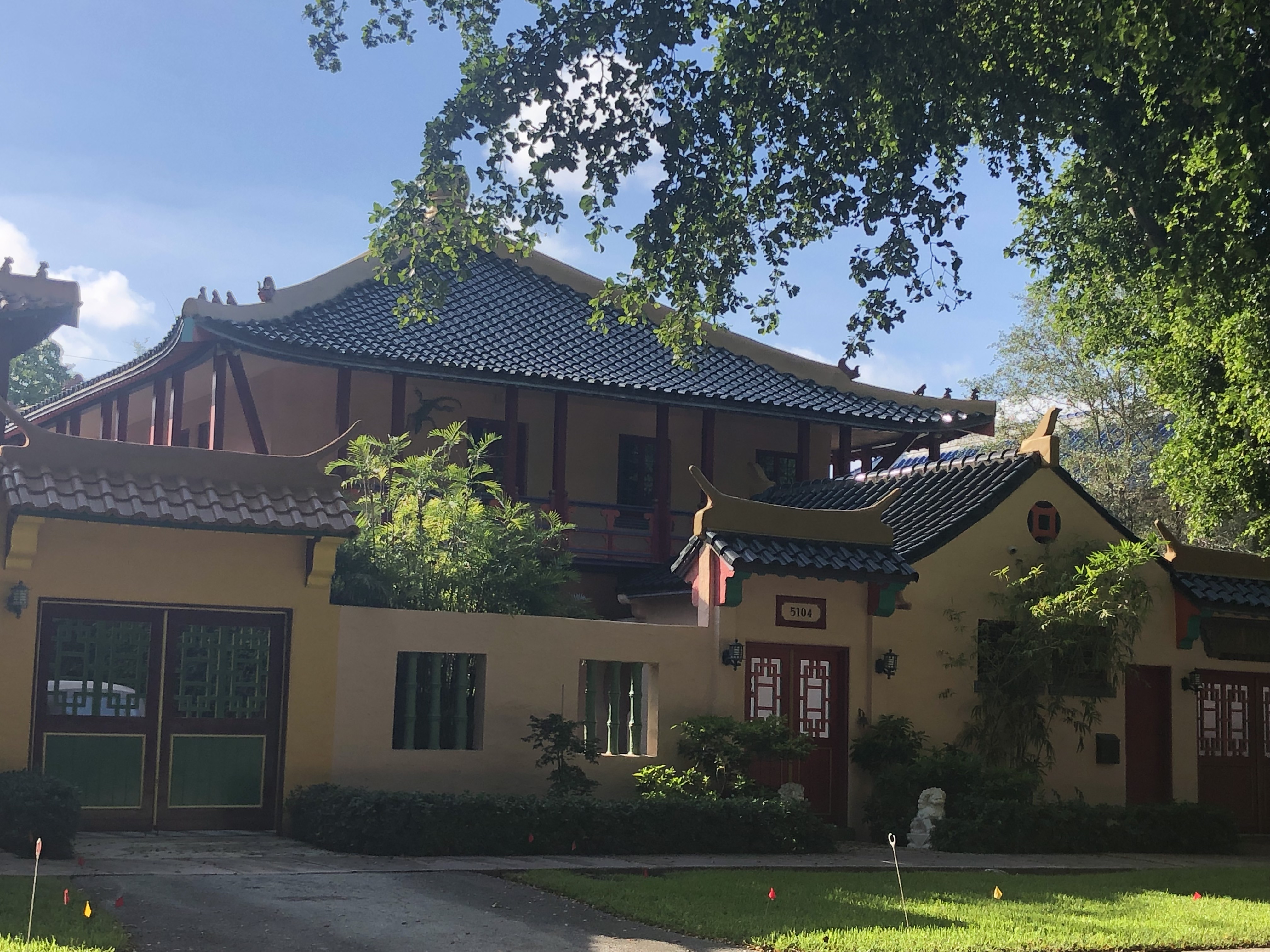 All within a large square block. I could insert more pictures, but you get the idea.

But now, let’s think about Way Back When. Namely, when Florida was a jungle. Somebody had to hack their way through South Florida with all its coral rock. 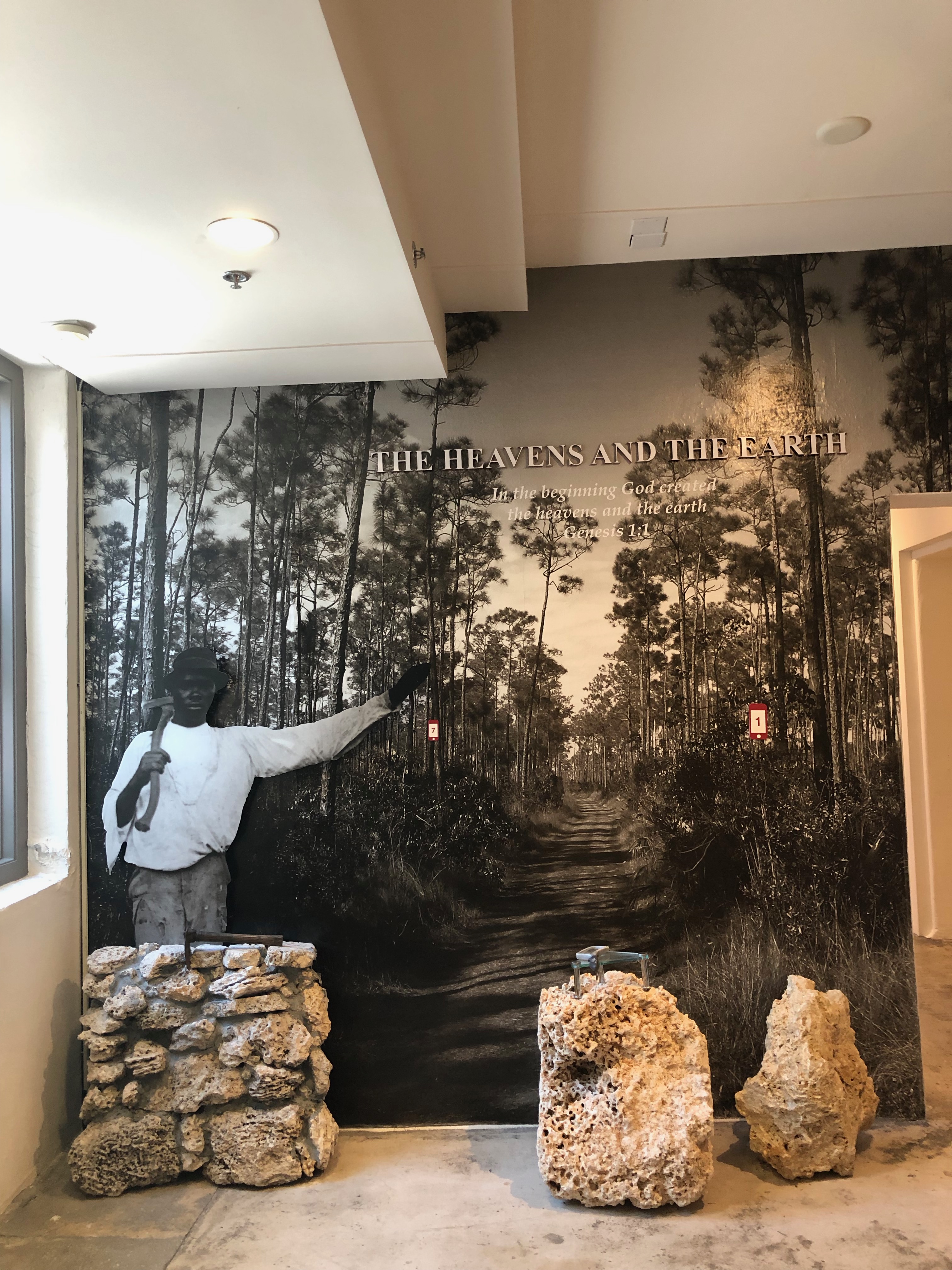 Take a moment to appreciate that fact.