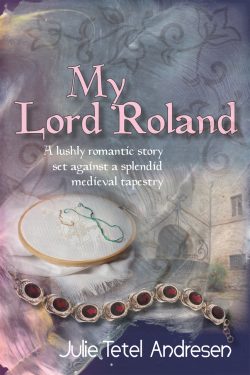 The first time Lady Marguerite Montcrief sees Sir Roland of Guimont, she’s at the glittering Plantagenet court, caught in intrigues of state. The second time, she’s at Montcrief Castle, and Sir Roland has come to deliver bad news. Her father has died and, before his death, he contracted her in a marriage to a man she considers a boorish fool.

Stunned by the news, Marguerite suffers yet another shock. Roland makes her an offer of marriage to himself. Marguerite is under no illusion that the powerful knight has fallen victim to her charms. Rather, since the Montcrief and Guimont estates share a border, he is looking to increase his lands. And, while she thinks Sir Roland would make her a far better husband than the boorish fool, she doubts he could ever care for her. And she’s heard the rumors ….

She knows Sir Roland to be a charming man, a courtier and a rake, who can have any woman for the asking. She’s also heard that he’s a dangerous man and, some whisper, his brother’s murderer. It would never do to love such a man. No matter that his rough, vital, masculine presence fills her body with longing and her heart with flame.

It could be death to love Sir Roland – and torment to live without him.