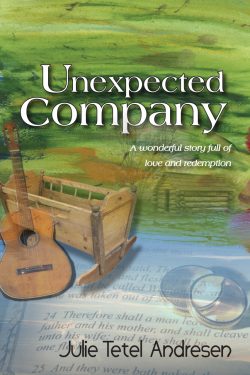 Barbara Johnson is the proud, fiercely independent mother of infant Sarah, a child of war. On a chilly November evening she gets a rare knock on her door. She opens it to find a tall, dark stranger looking for work, one who lets her know that her neighbors know he’s come to her doorstep. Reassured, she invites him in for supper and to negotiate the terms when a second, even rarer knock is heard ….

Now Barbara has to claim the stranger sitting at her kitchen table as her husband. Because she has just opened the door to her worst enemy – a woman she does not know, but one she fears has a claim on her beloved Sarah. For Sarah is the child of the British general who was killed the year before during the Second War of Independence. And Mrs. Ross wants to lay claim to her husband’s child.

But Mrs. Ross has no claim if the stranger plays along with Barbara’s assertion that he’s the father of her child.

Soul-scarred and haunted by a tragic past, Morgan Harris steps in to stand between baby Sarah and sorrow …. Here, amid a web of needful deception, he reaches out for redemption. Will it elude him one more time?