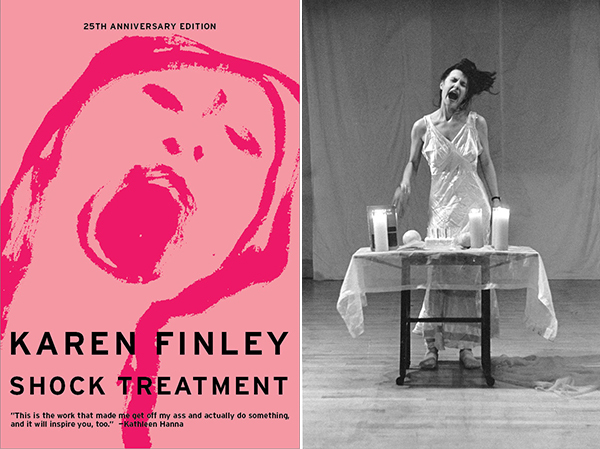 Yesterday (Thursday, October 25) Karen Finley gave a heart-felt and eye-opening presentation at Duke University in the course “Performance Art: History and Theory” taught by Professor of Art and Art History Kristine Stiles. Finley’s work is striking and thought-provoking. I took inspiration from the way she exhorted the students to fully integrate their research and their art with their lives outside the classroom and the artist’s studio. 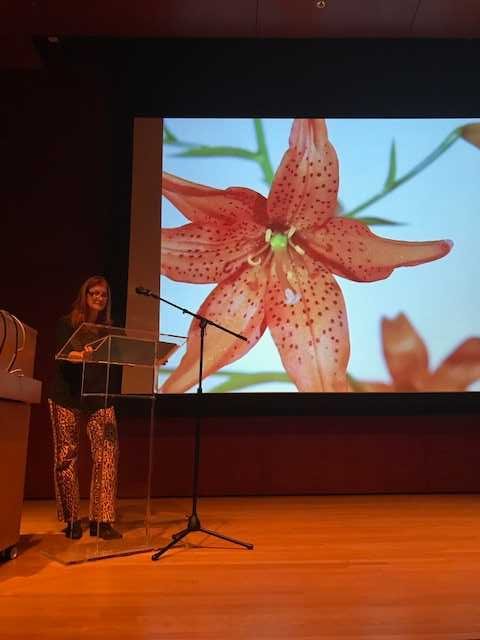 She is currently a professor in the Tisch School of the Arts at New York University.

Her presentation had two parts.

She presented images from her work of the last 30 years and commented on them. The central work – to my way of thinking and the one that put her on the national stage – is a performance she did entitled “We Keep Our Victims Ready” in 1989.

In this piece she smears chocolate on her naked body. Here’s an image she showed the class: 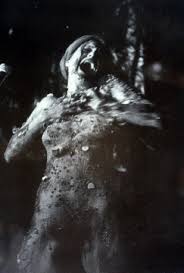 In 1990 Finley was one of four artists whose grant applications to the National Endowment for the Arts were vetoed because the content was considered inappropriate. She was denounced on the Senate floor by none other that North Carolina’s own Senator Jesse Helms.

She lawyered up and argued that her First Amendment free speech rights had been violated. She won in both District Court and the U.S. Court of Appeals. However, in 1998 she ultimately lost the Supreme Court case NEA v. Finley. The court ruled that the government could restrict funding based on decency standards.

If the run-up to the Supreme Court case was difficult (she was the target of personal attacks and death threats), the fallout from the loss was worse. She had had a show scheduled at the prestigious Whitney Museum in New York City, but then it was canceled. She also found it impossible to find a job.

So, among other strategies for staying financially afloat, she posed for Playboy, which she now says was perhaps not the best move.

Another image Finley showed was of her with comedian Bill Maher who has had his own run-ins with the limits of free speech and/or the violations thereof. 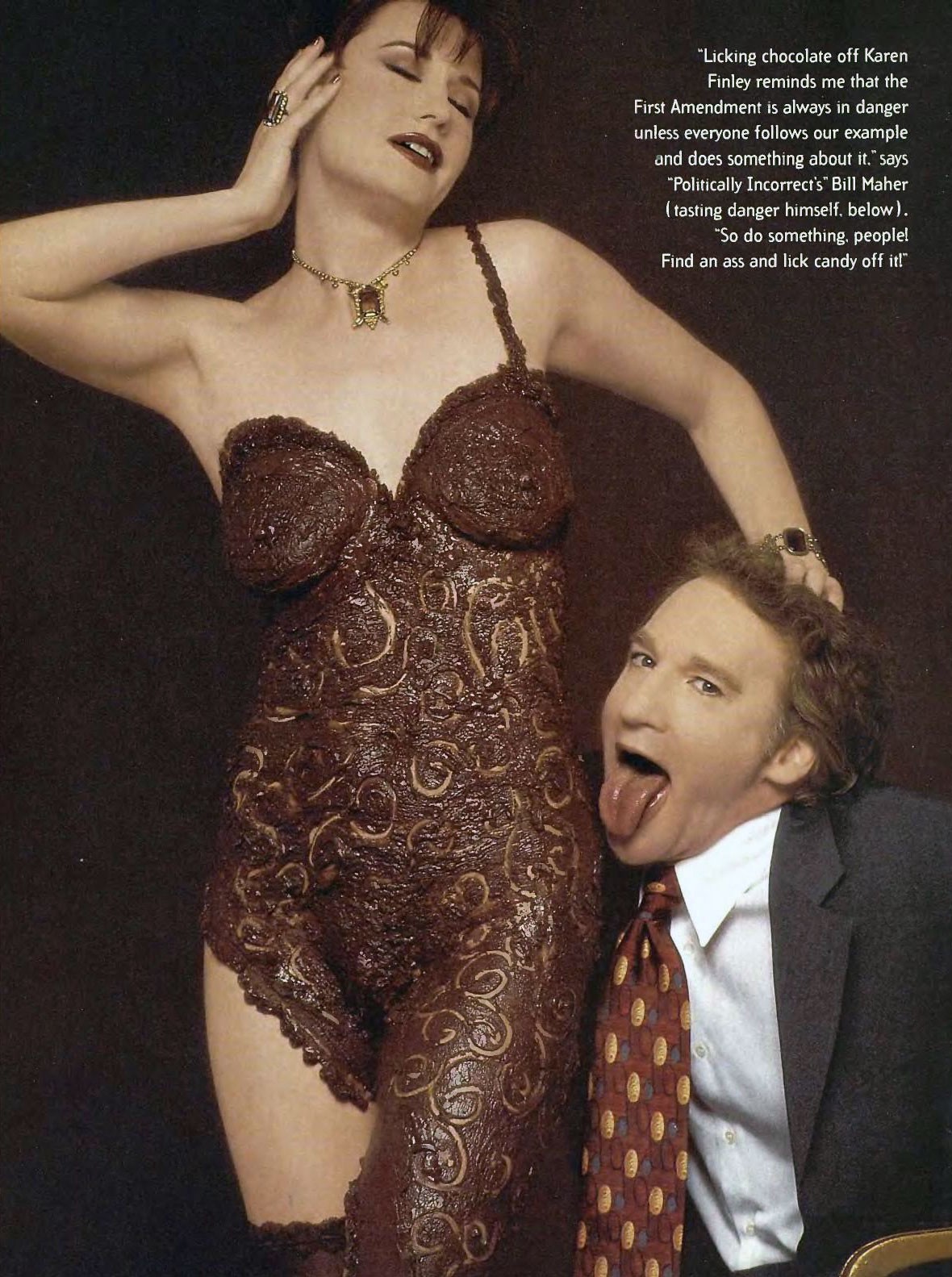 The question can now be asked: What was Finley’s point in covering her naked body in chocolate?

Answer: She was hardly trying to position herself as an advocate of free speech or a transgressor of decency. Rather, she was inspired by the 1988 case of Tawana Brawley, an African-American teenager who was found alive in a Hefty bag, clothes torn and burned, covered in feces and with racial slurs written on her torso in charcoal.

The incident drew national attention and became extremely controversial, especially when the possibility arose that Brawley had done it to herself.

Finley’s point of smearing herself in feces-symbolic chocolate was not to decide the issue of who perpetrated this act on Brawley. She points out that even if Brawley had done it to herself, she could have only done it out of the desperation of whatever circumstances drove her to do it.

The emotional impetus behind the performance was empathy.

Finley has also commented on the work of Jackson Pollock. Here is his Convergence (1952): 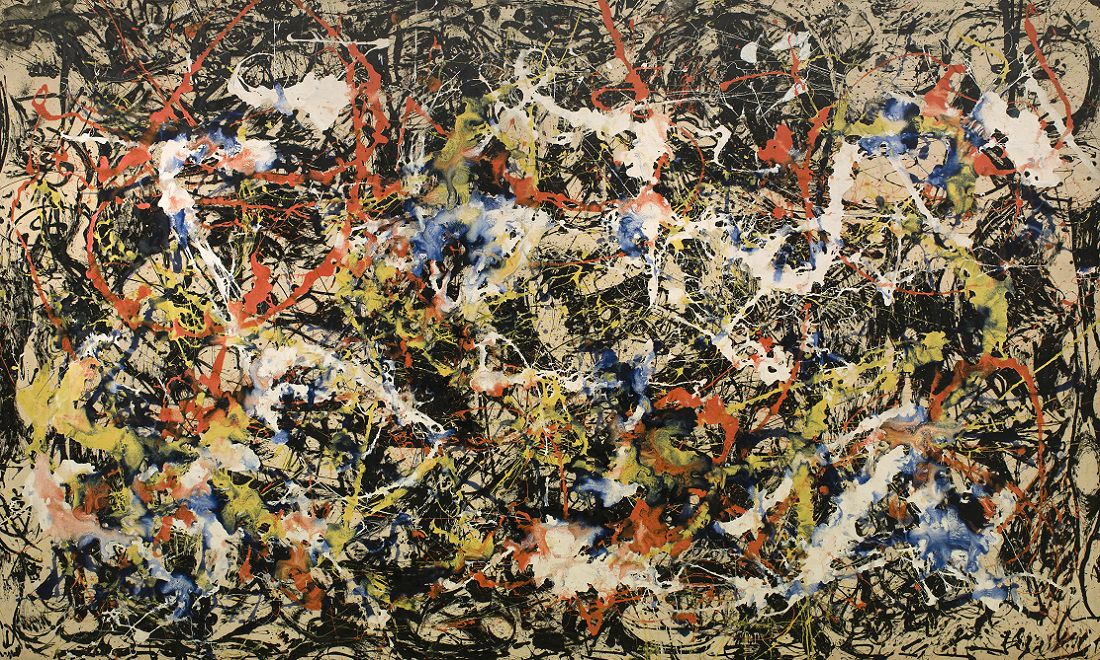 Pollock is famous, among other things, for dripping paint all over canvases and for saying: “I don’t paint nature. I am nature.”

You want nature? Well, how about this? 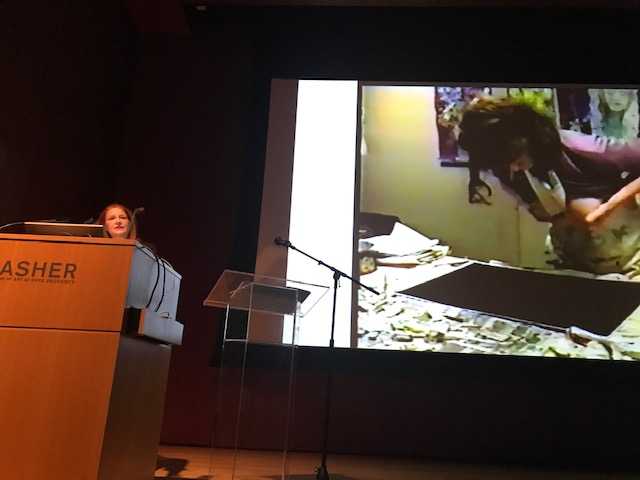 This image is of Finley dripping breast milk all over … wait for it … black velvet.

Finley’s art consistently works to counter the narrative that women’s bodies are disgusting, dirty and animal-like. Her work challenges notions of who has the right to represent or display a woman’s body and asks the question: When, if ever, is it indecent?

She gave a highly charged and highly effective twenty-minute reading from her latest book Grabbing Pussy, just out in August 2018 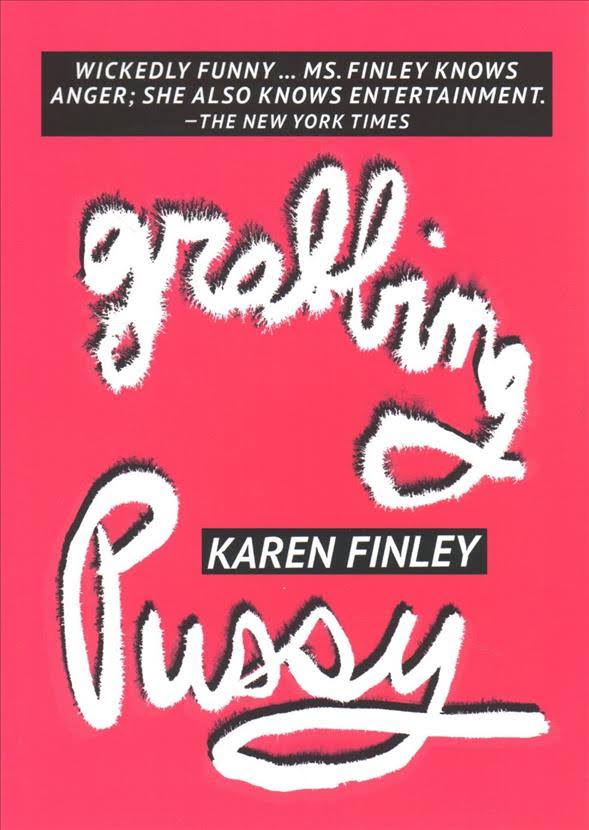 Everyone knows the political reference, and Finley doesn’t hold back.

Then it was time for Questions and Answers: 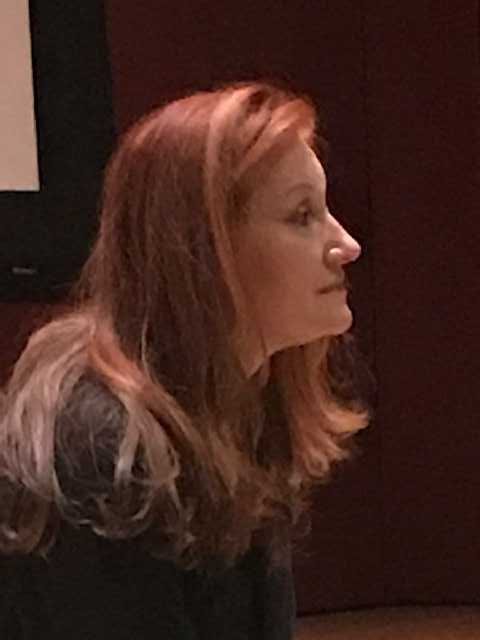 Here’s a beautiful image of Karen during the Q&A, taken by Kristine Stiles

In responding to one of the students’ questions, she said, “I am one angry bitch,” and she spoke of the fear that exists when women raise their voices to be heard. She considers herself privileged to have been censored, to have been deemed too dangerous to be heard.