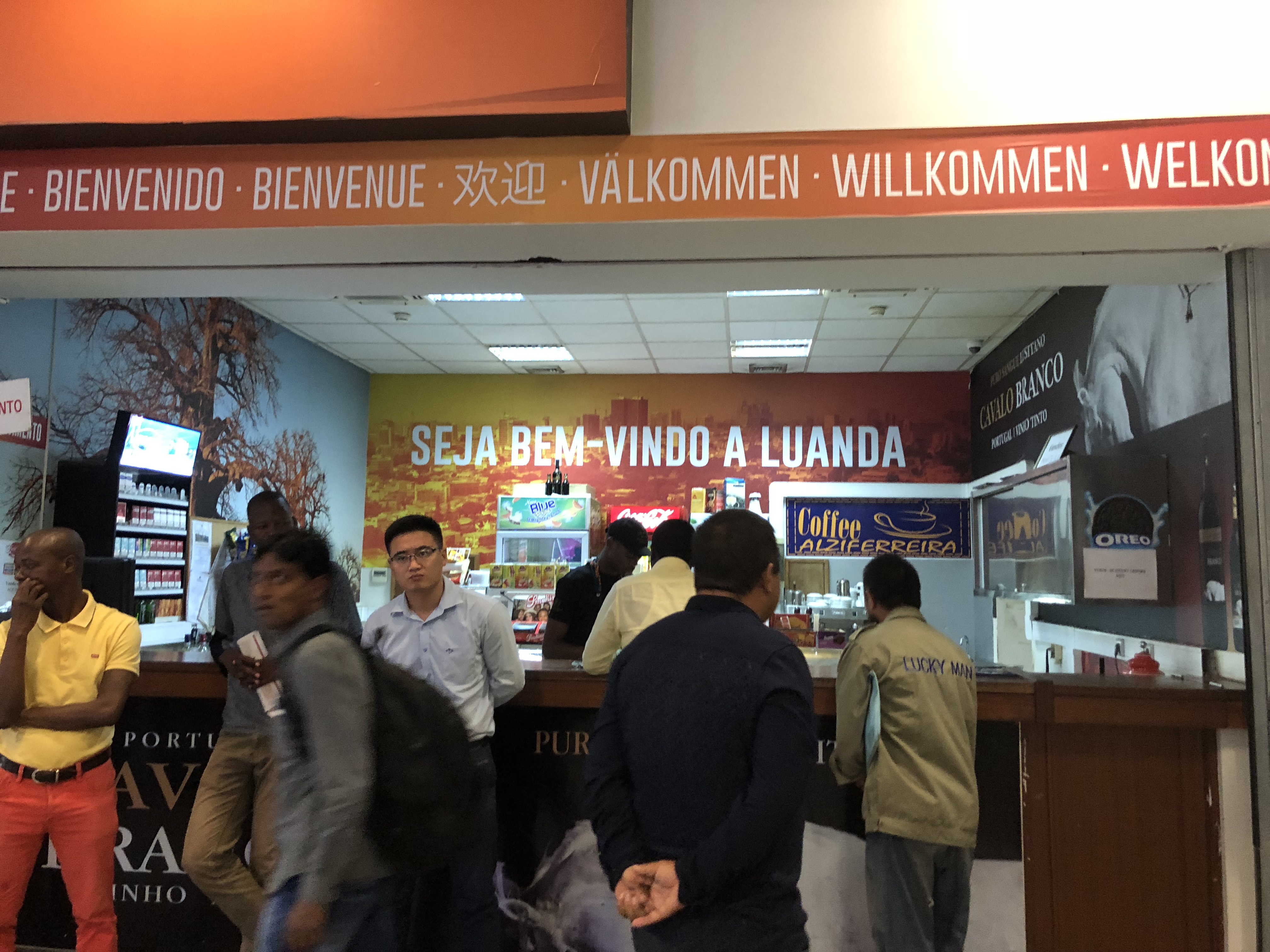 How to Travel in Angola for Seven Days

“This is Angola.” We heard this phrase a lot after we took a direct flight from Addis Ababa, Ethiopia to arrive in Luanda, Angola. While you travel in Angola, this phrase is uttered at the moments when the situation facing you is utterly inexplicable.

By the way, in the title image, Seja Bem-Vindo in Luanda means: “Be Welcome in Luanda.” Since it appears on a snack counter at the exit to the luggage carousels at the airport – where we spent a tremendous amount of time – we came to see the Welcome as a tad ironic.

We arrived at 1:00 p.m. We had done our homework (so we thought) and read the official government visa instructions for Angola which said we could buy our visas on arrival.

Here is what the official government instructions do not say: If you arrive without a visa and the tourist visa system is down, the traveler is at fault. You will be detained and your passport confiscated.

When we arrived, the travel visa system was down.

We finally left the airport at 11:30 p.m. The only reason we could leave was that Phillip had a friend we had come to see, namely Carla who is native Angolan, and she has a guy by the name of Mr. Abel who could scare up $240 (for the two of us at $120) for the visas.

Note: this was on a Sunday evening, no bank involved.

Further note: the demand for payment was not in Angolan currency, the Kwanza. Irregular? Uh, yeah.

We left the airport without our passports and were told to come back for them in the morning. We also left without our luggage; our baggage nowhere to be found.

I had a decent night’s sleep at my hotel, The Florença in the upscale suburb of Talatona, around several corners from Carla’s house: 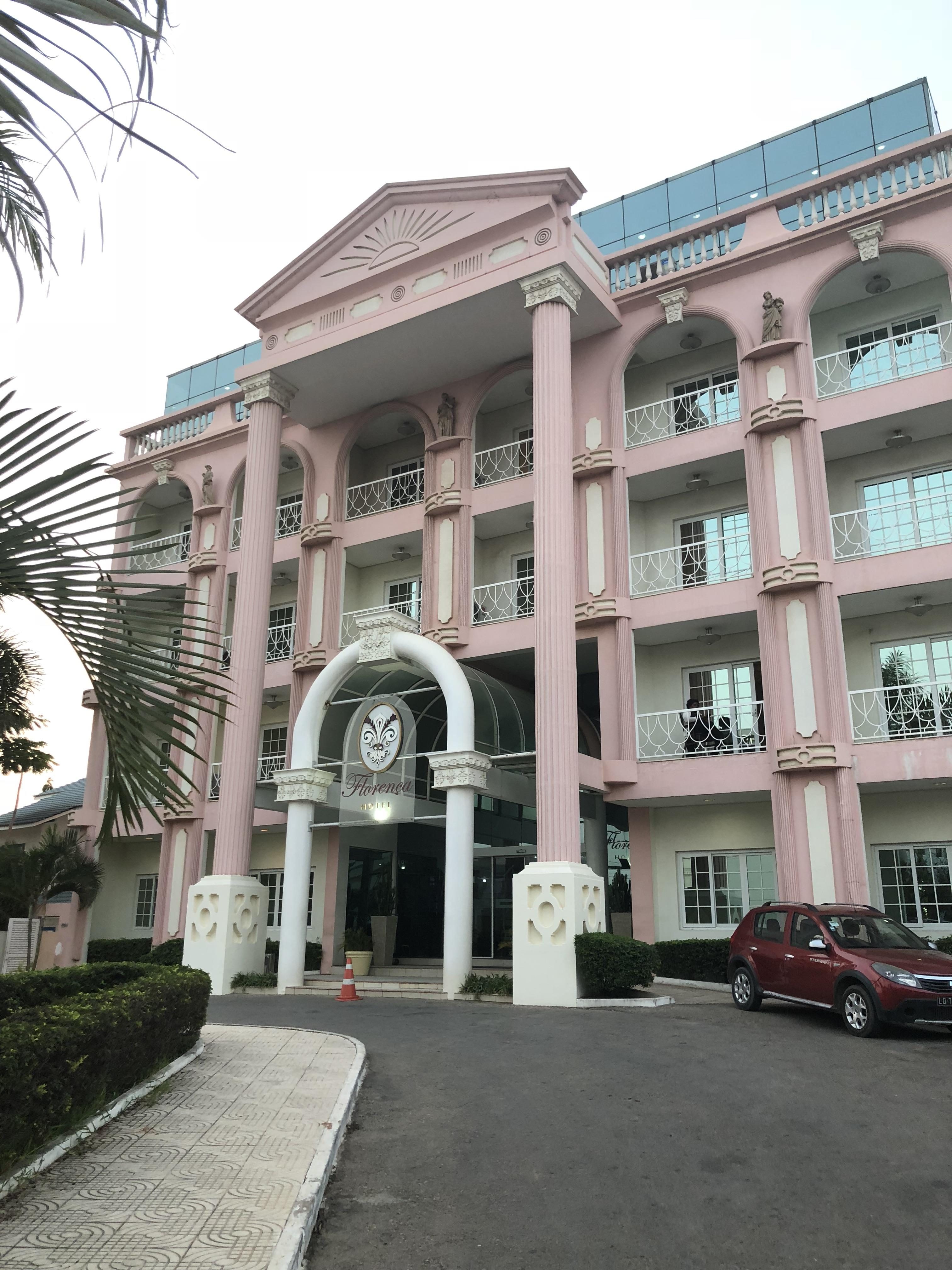 It was nice to sleep in a bed and have a decent breakfast at the hotel (instead of spending the night at the airport or in a jail cell. That could happen. We heard stories). The buffet was Portuguese-style and copious: 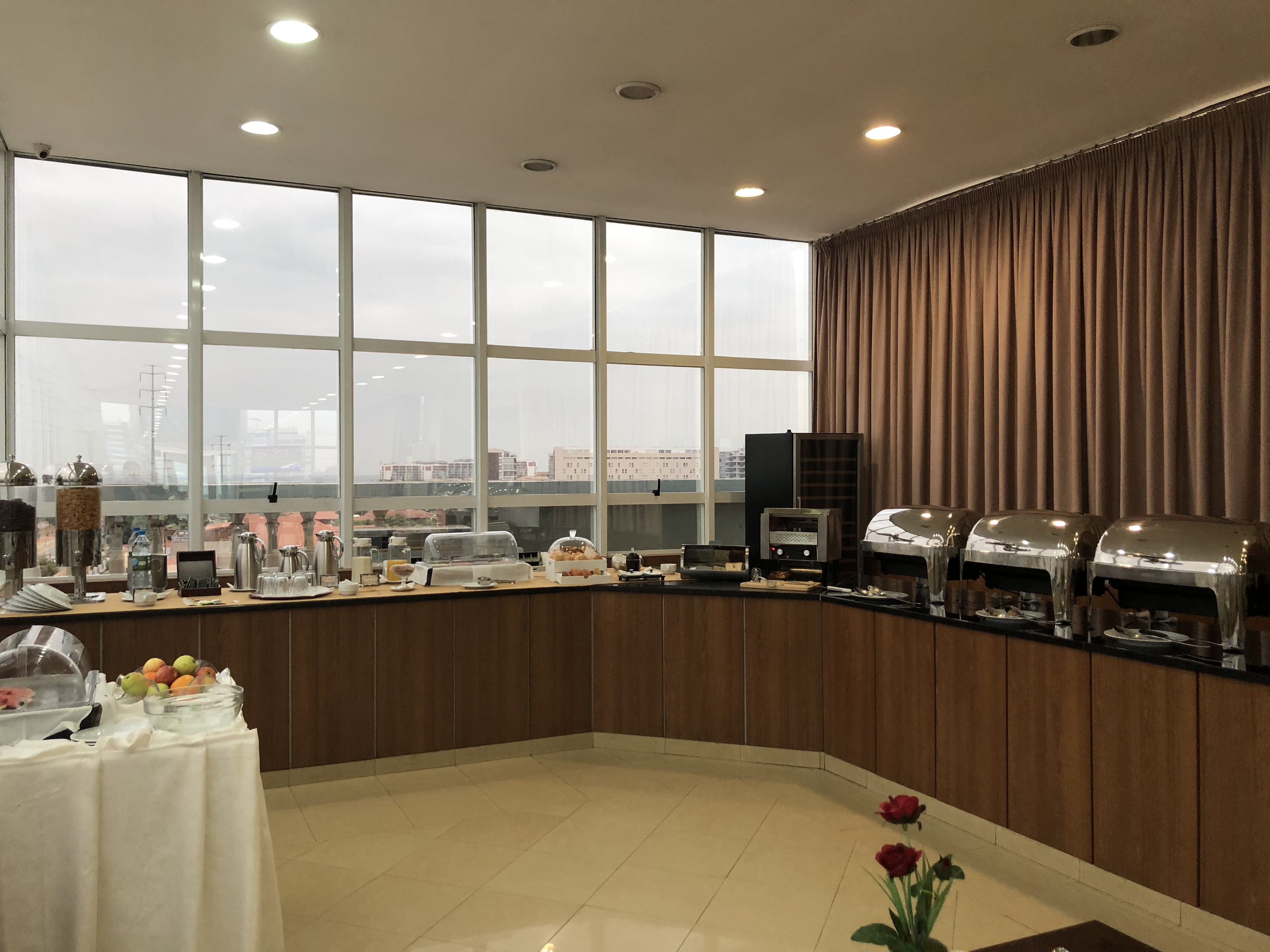 the space bright and clean: 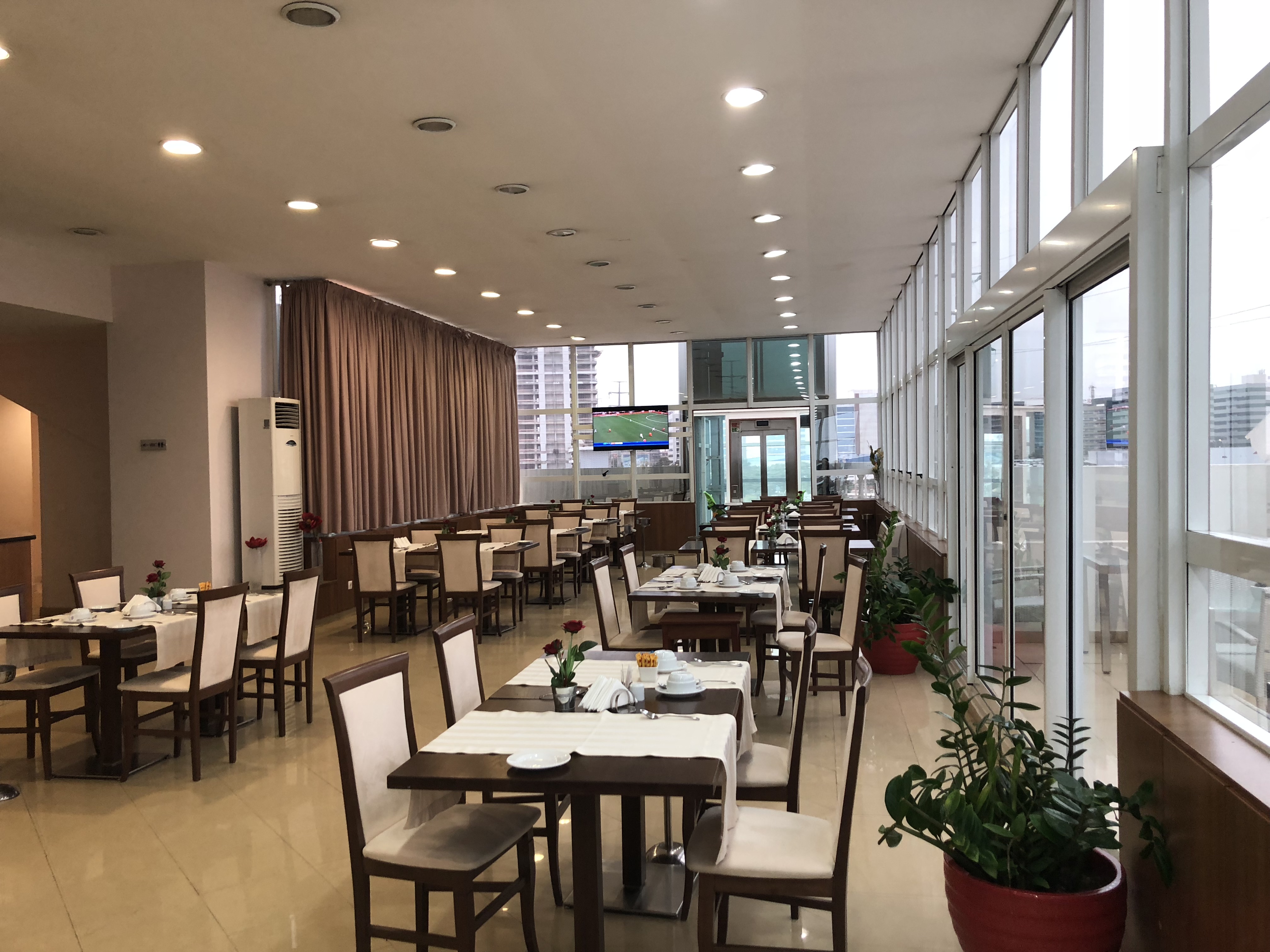 Then we went back to face the rigors of the day at the airport. We arrived around 11:00 am and left at about 5:00 pm with our awesome visas … 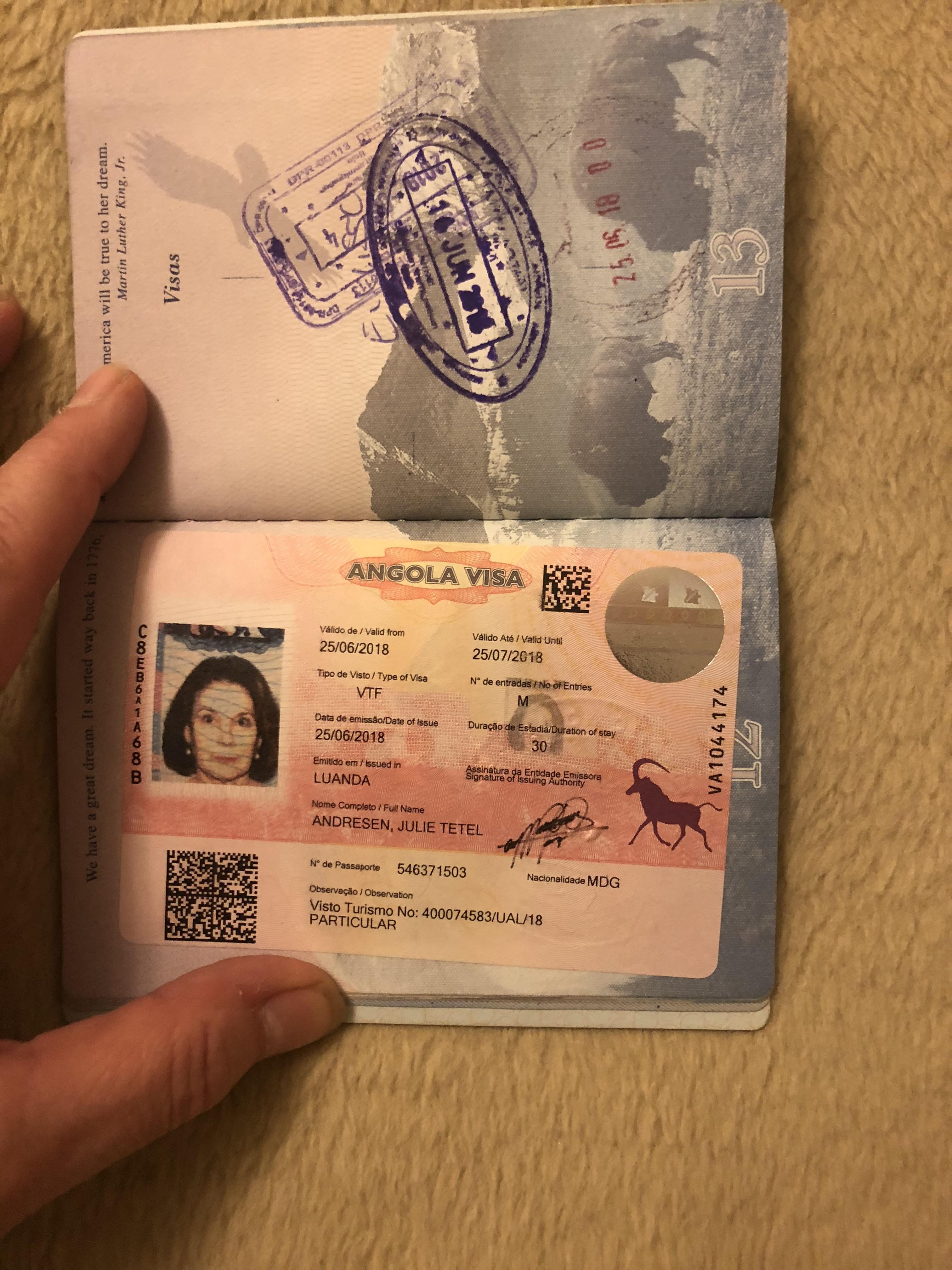 Note the animal on the lower right: the giant sable antelope, the symbol of Angola

The new fiction concerning our luggage was that it hadn’t yet left Ethiopia. The next flight from Addis Ababa commenced on Day Four when we could expect it, so on Day Three, we were in a holding pattern.

On Day Three, I joined in with the wives whose husbands work at Chevron for an event they call The Breakfast of Hope. It is held every Tuesday. (How the heck did I participate in this event? The usual way it works in my world: I am not quite sure.)

The event goes like this: kids from the street gather at a park and have a cultural moment of singing and drumming: 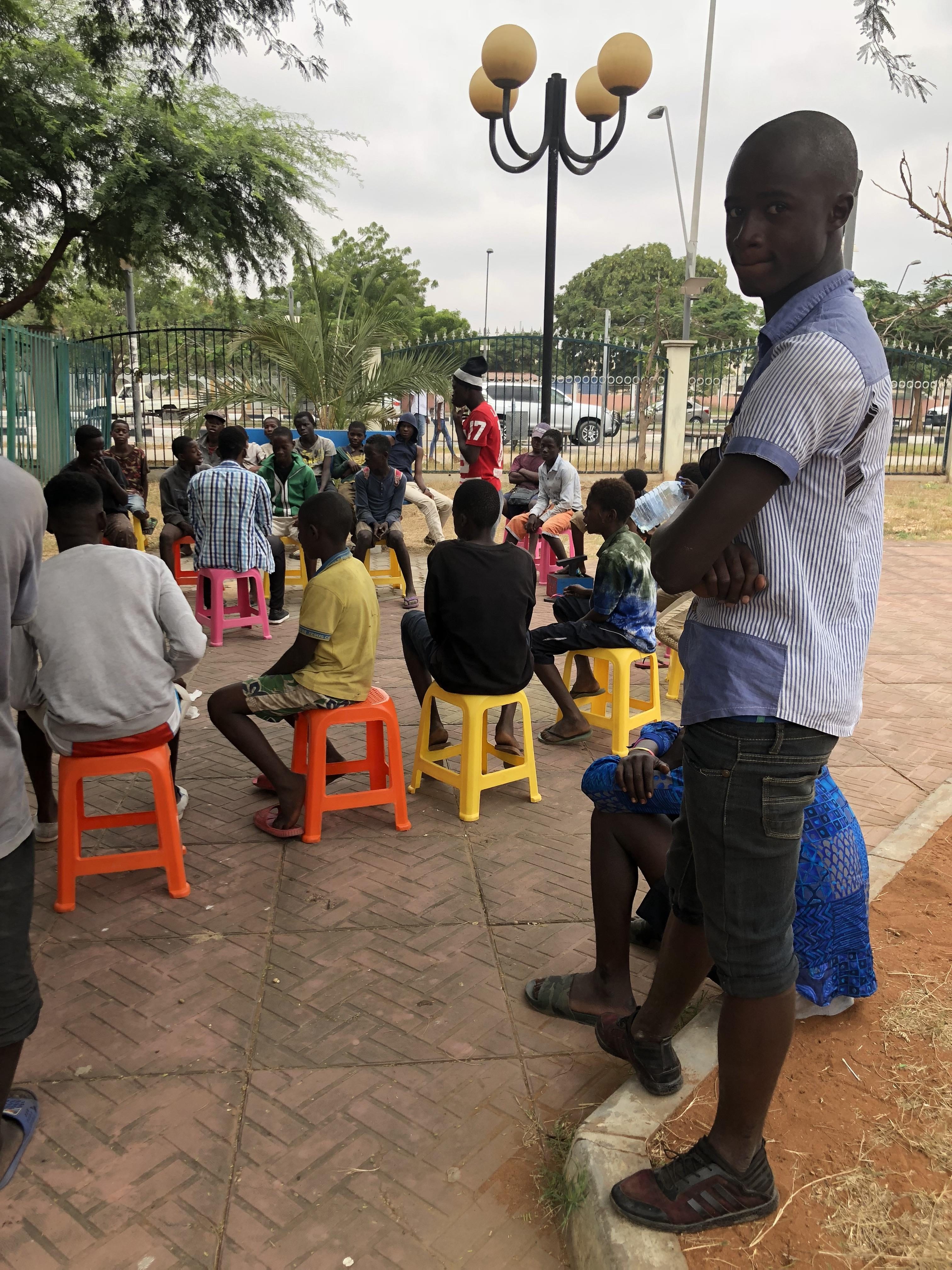 Then there are activities. I like jigsaw puzzles so I got involved with one: 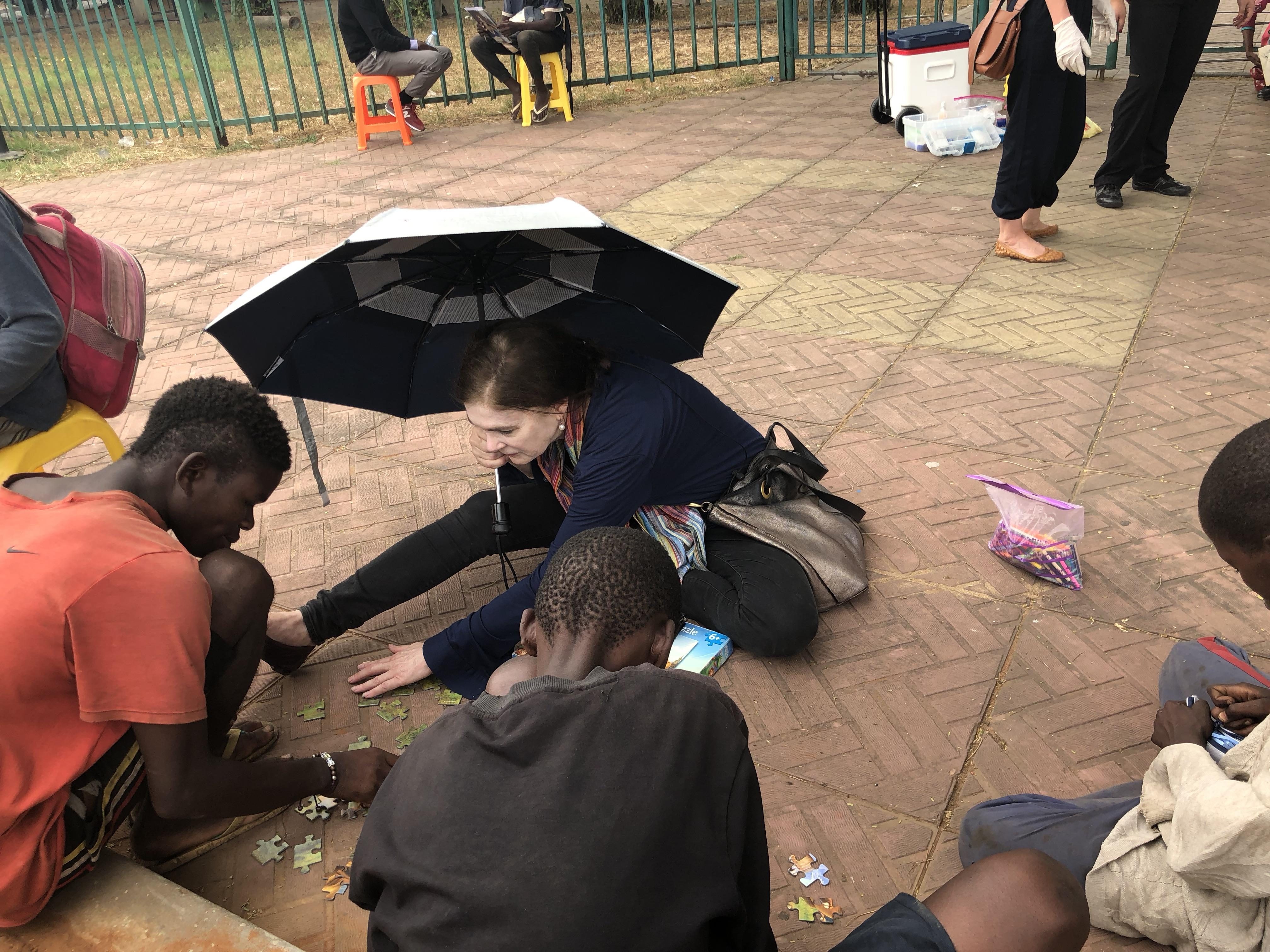 Then the kids line up to wash their hands and brush their teeth: 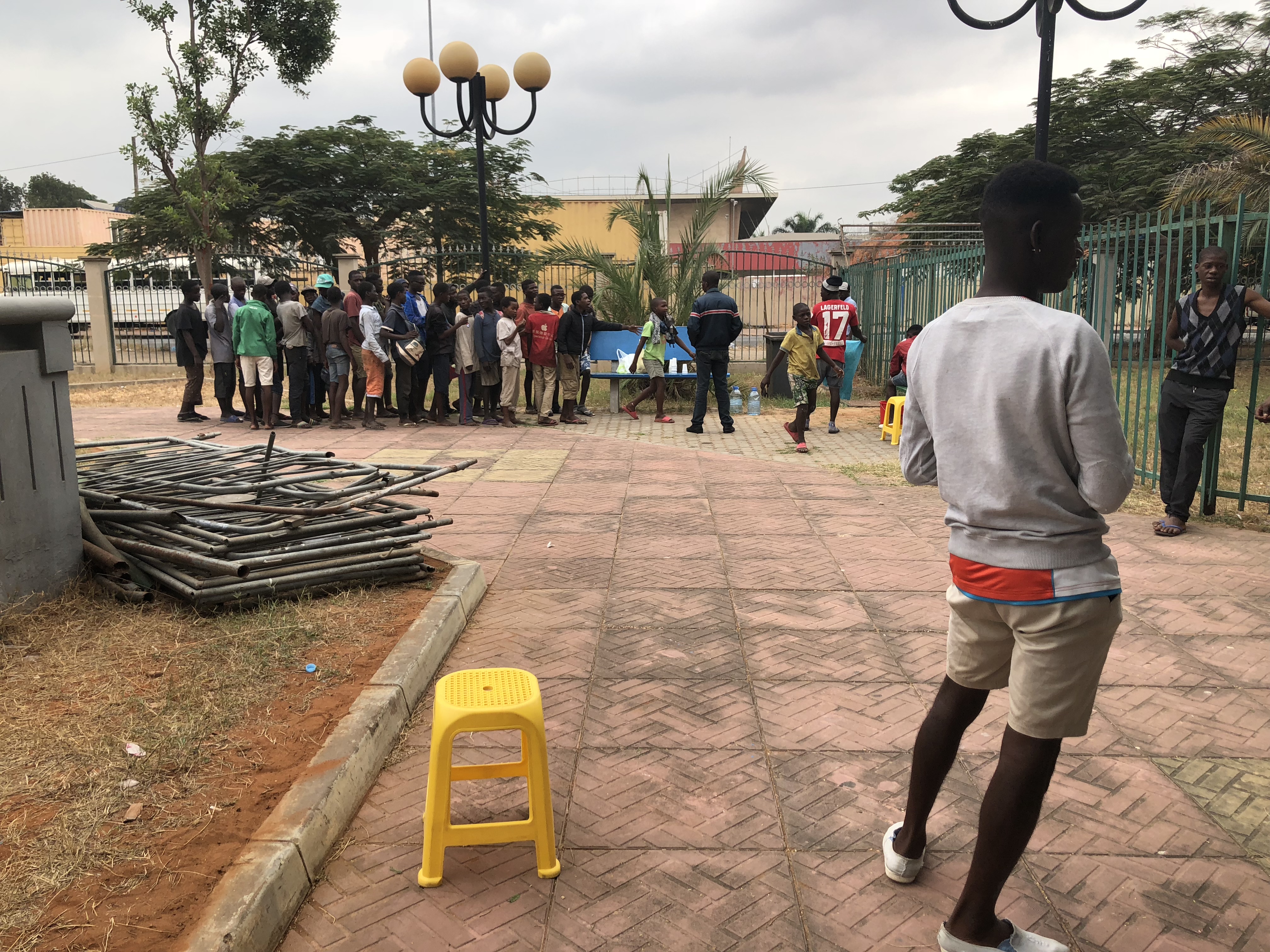 After which they are handed a plastic bag with food by the Chevron wives: 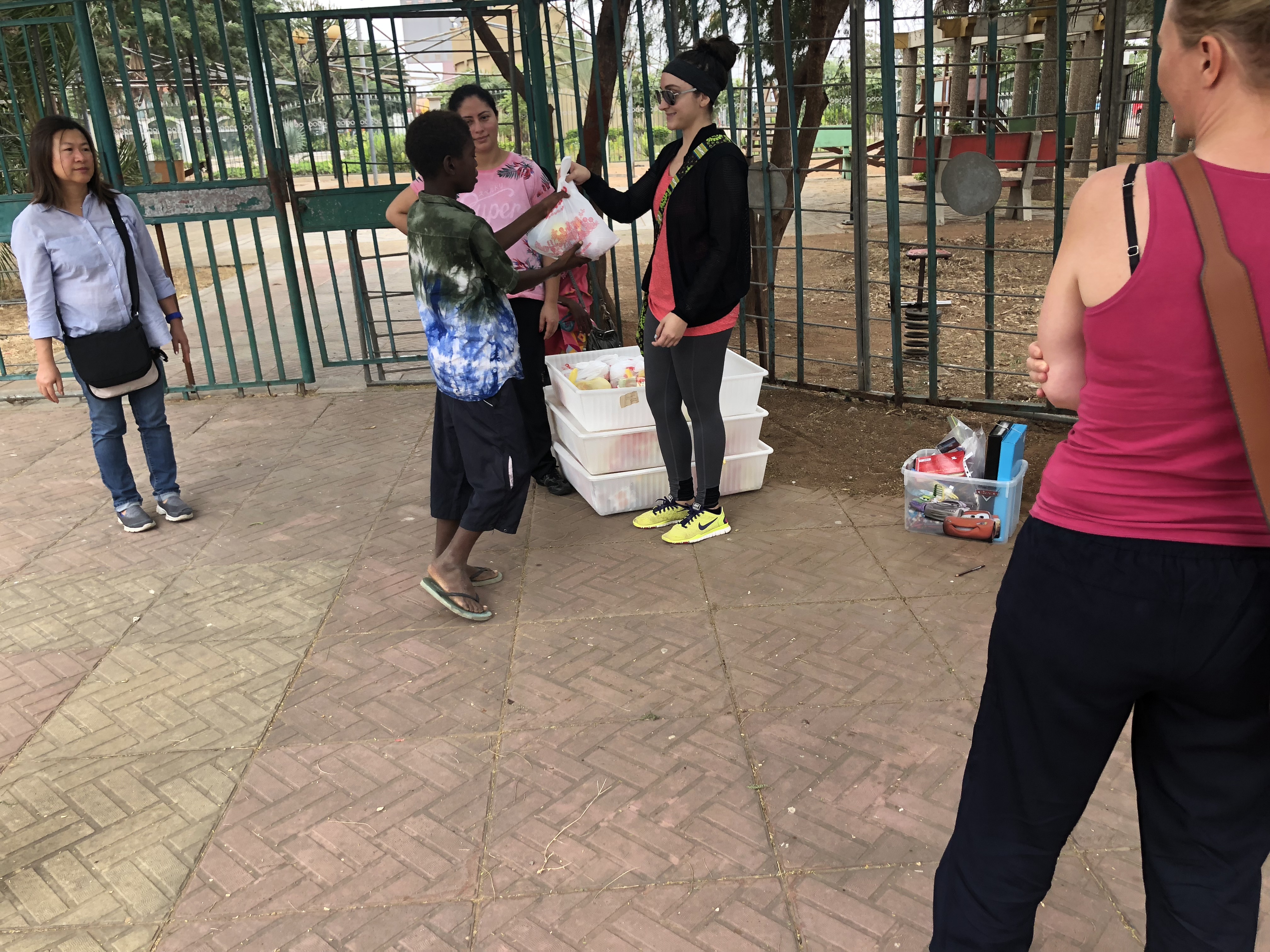 Re: Chevron. Do I need to mention that Angola is an oil-producing country?

The flight from Addis Ababa arrived. Our luggage was not coughed up onto the carousel. No surprise there. We figured it had been stolen on Sunday while confined to a waiting area for 11 hours.

We had a late lunch/early dinner at a fish restaurant on the water (the Atlantic Ocean), with this view: 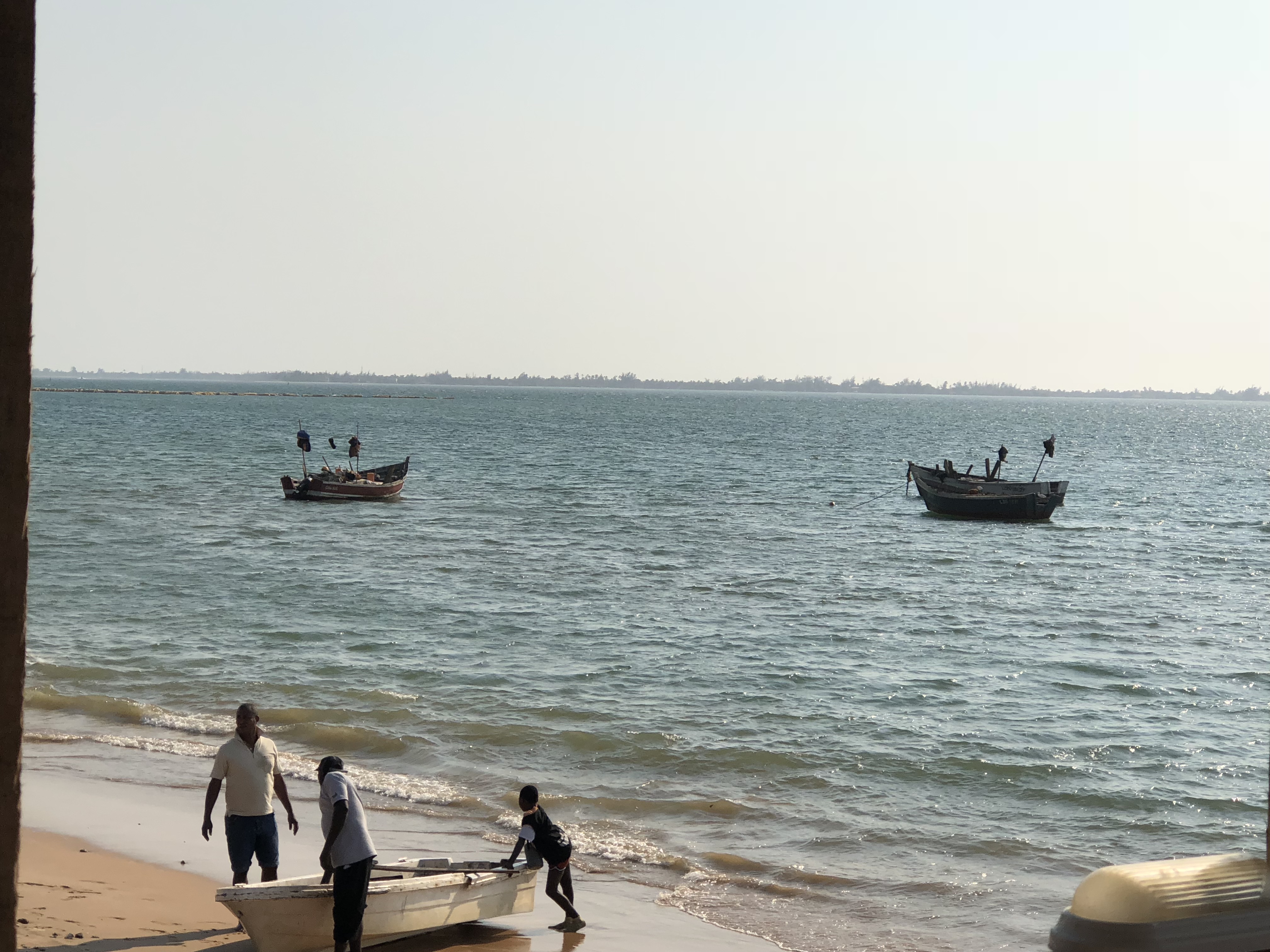 You choose your fish: 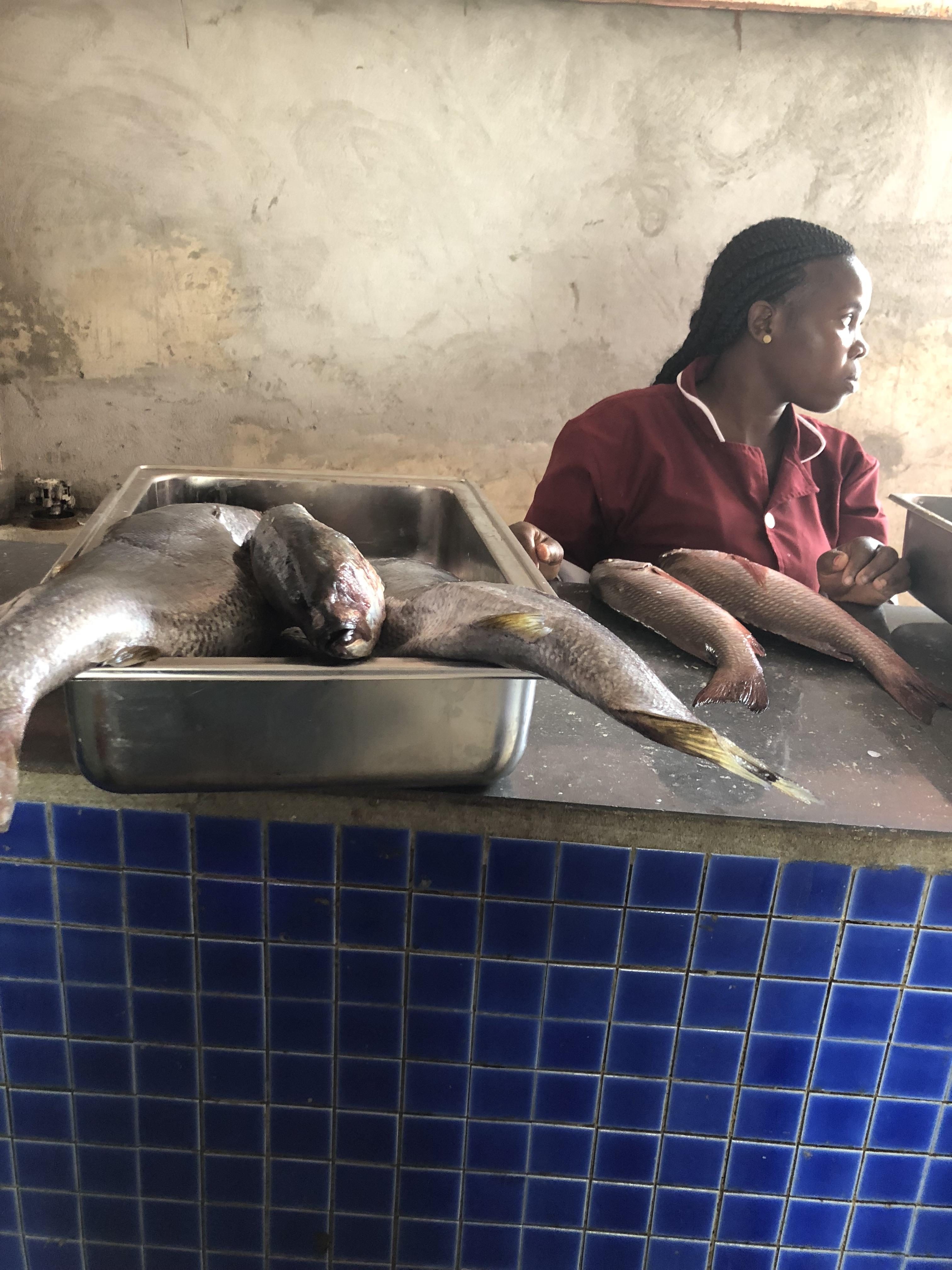 Then they serve it super fresh: 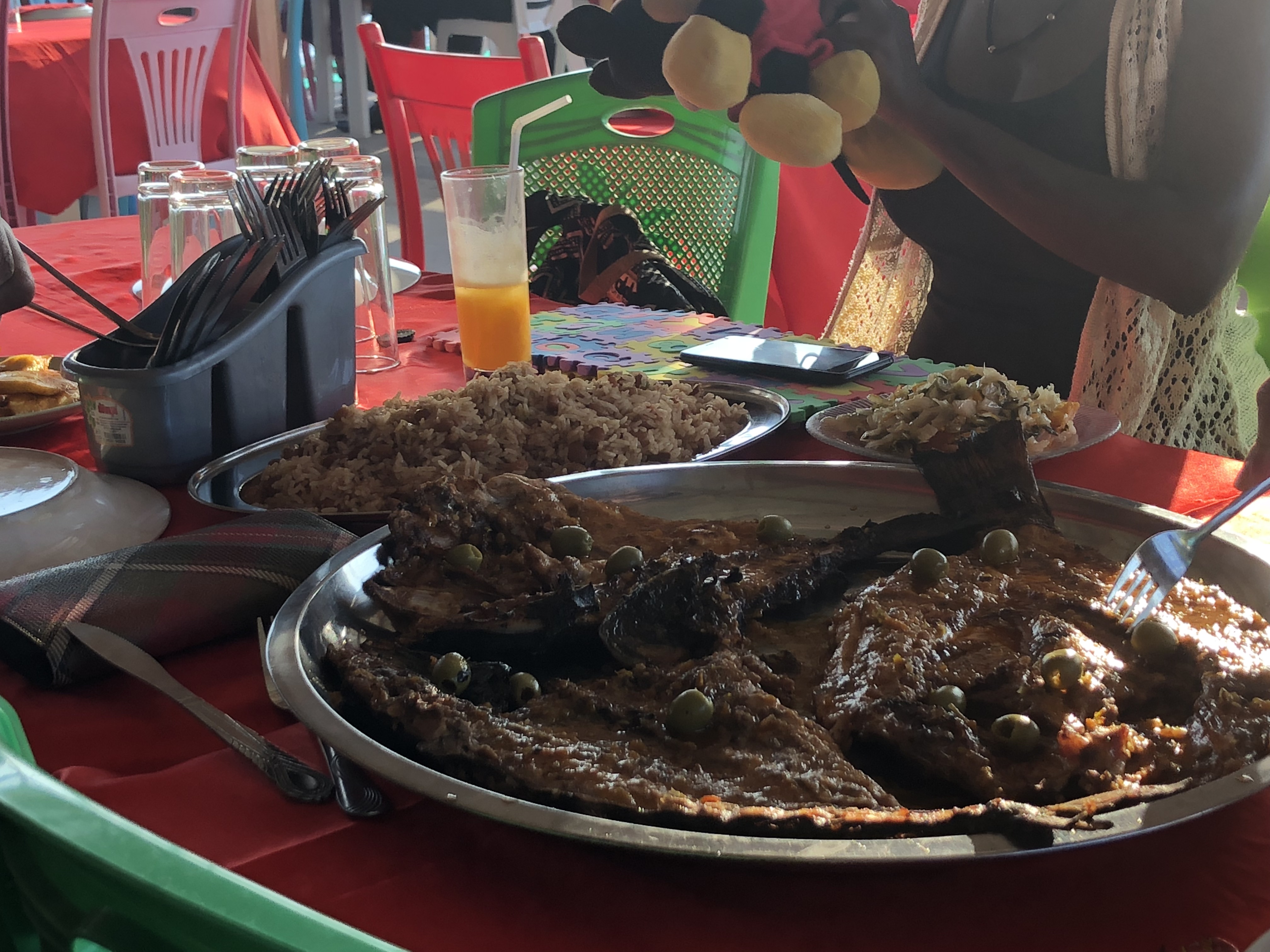 By the end of Day Four, I understood that believing anything on an official government website was a bit … well, naive … although no one came out and said so. Really, everyone we met felt bad about us losing our luggage in Angola and wanted to help us.

So much for our cred as world travelers.

In the morning Carla gave us a tour of downtown Luanda.

Since the gifts I had bought in Ethiopia had disappeared with my luggage, we went to Carla’s friend’s shop and I got Angolan gifts for my “little sister” Vanessa and her mother in North Carolina, who I knew would appreciate gifts from Africa.

Here’s what I got in Angola. (I wish I had documented what I bought in Ethiopia.) 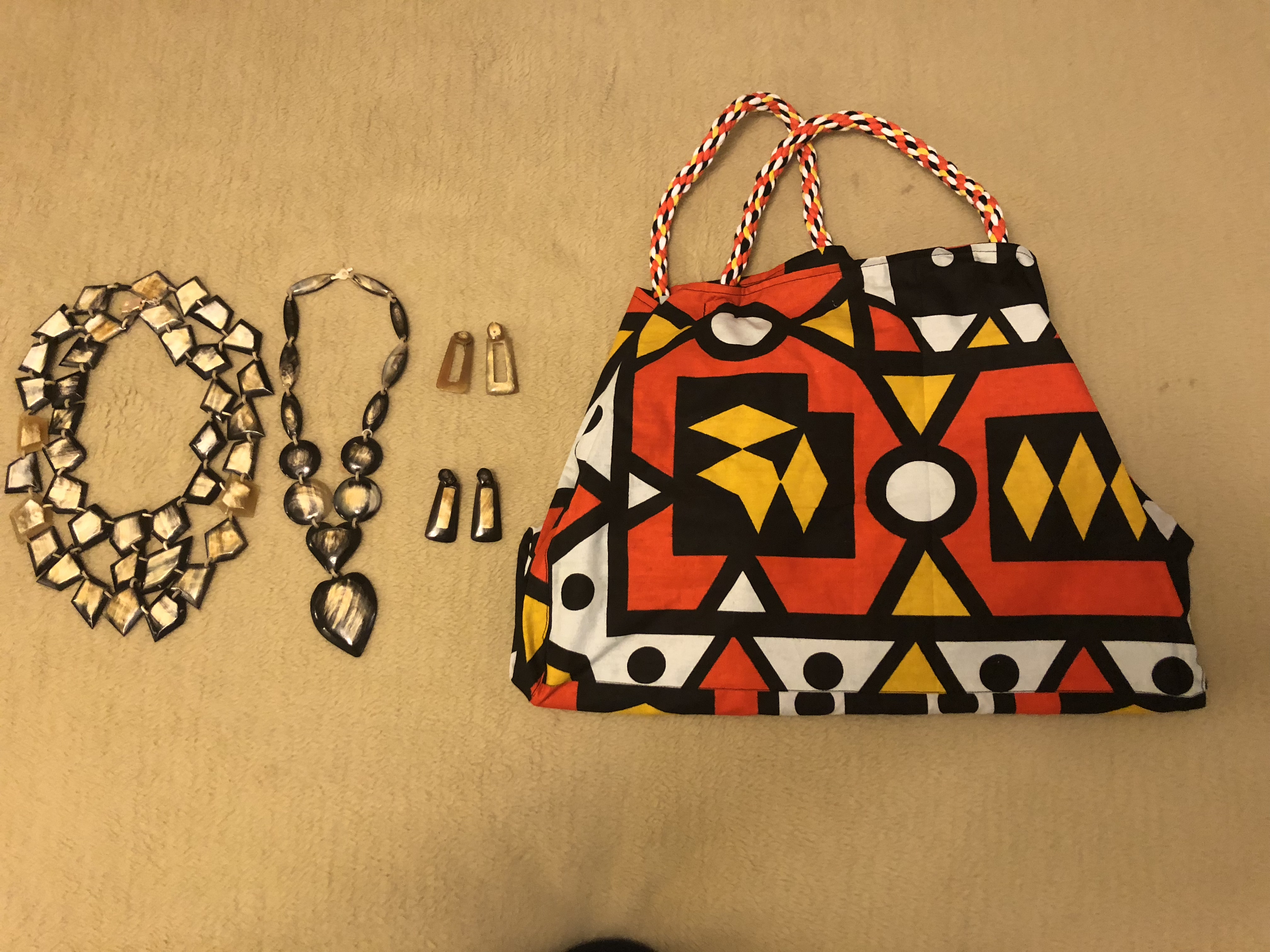 The building with the shop Sakocuia: 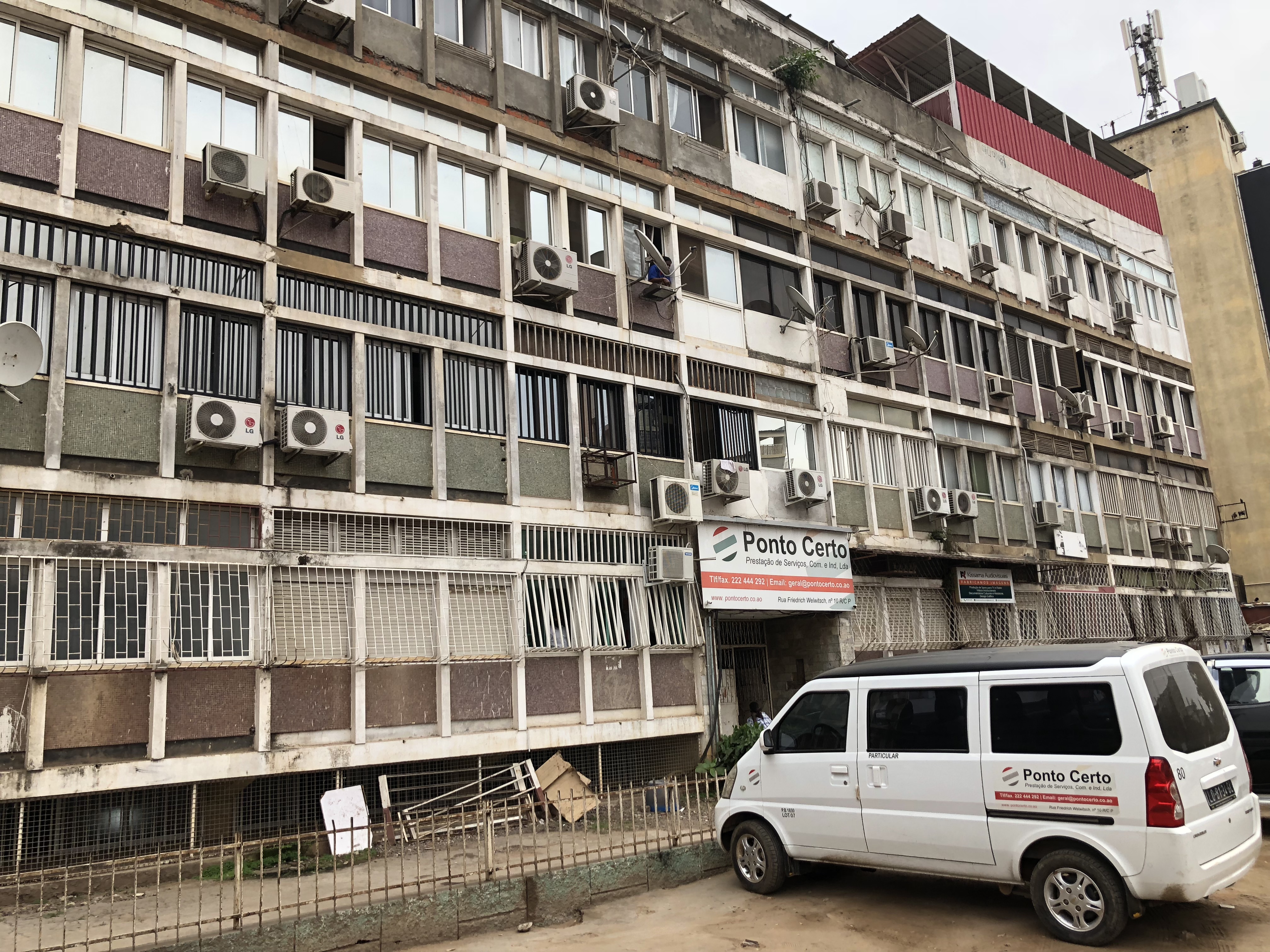 The shop is on the ground floor, no sign outside, so you have to know it’s there. You cannot happen upon it 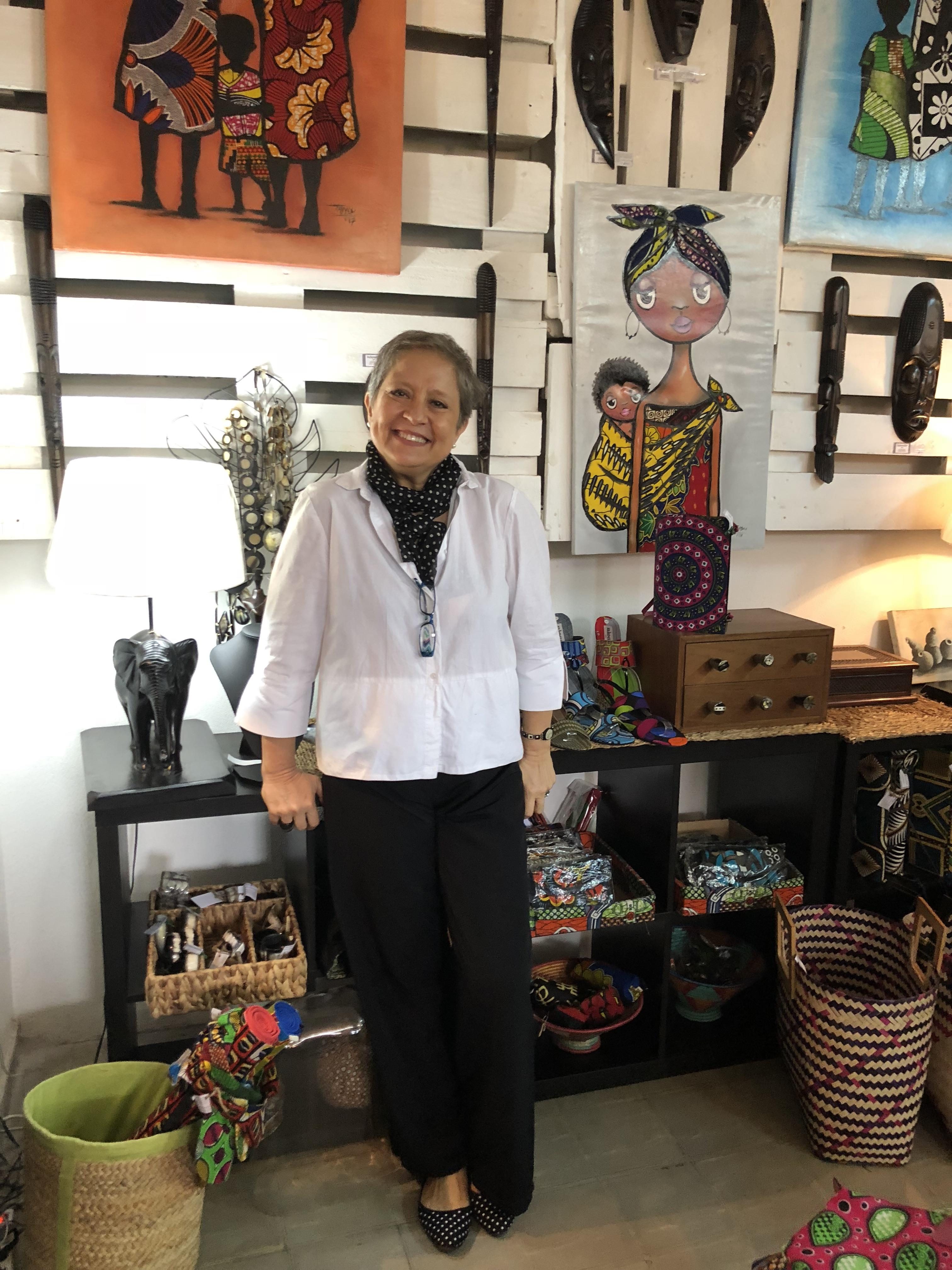 At some point in a city tour, one stops for coffee. Here’s Carla with a cappuccino: 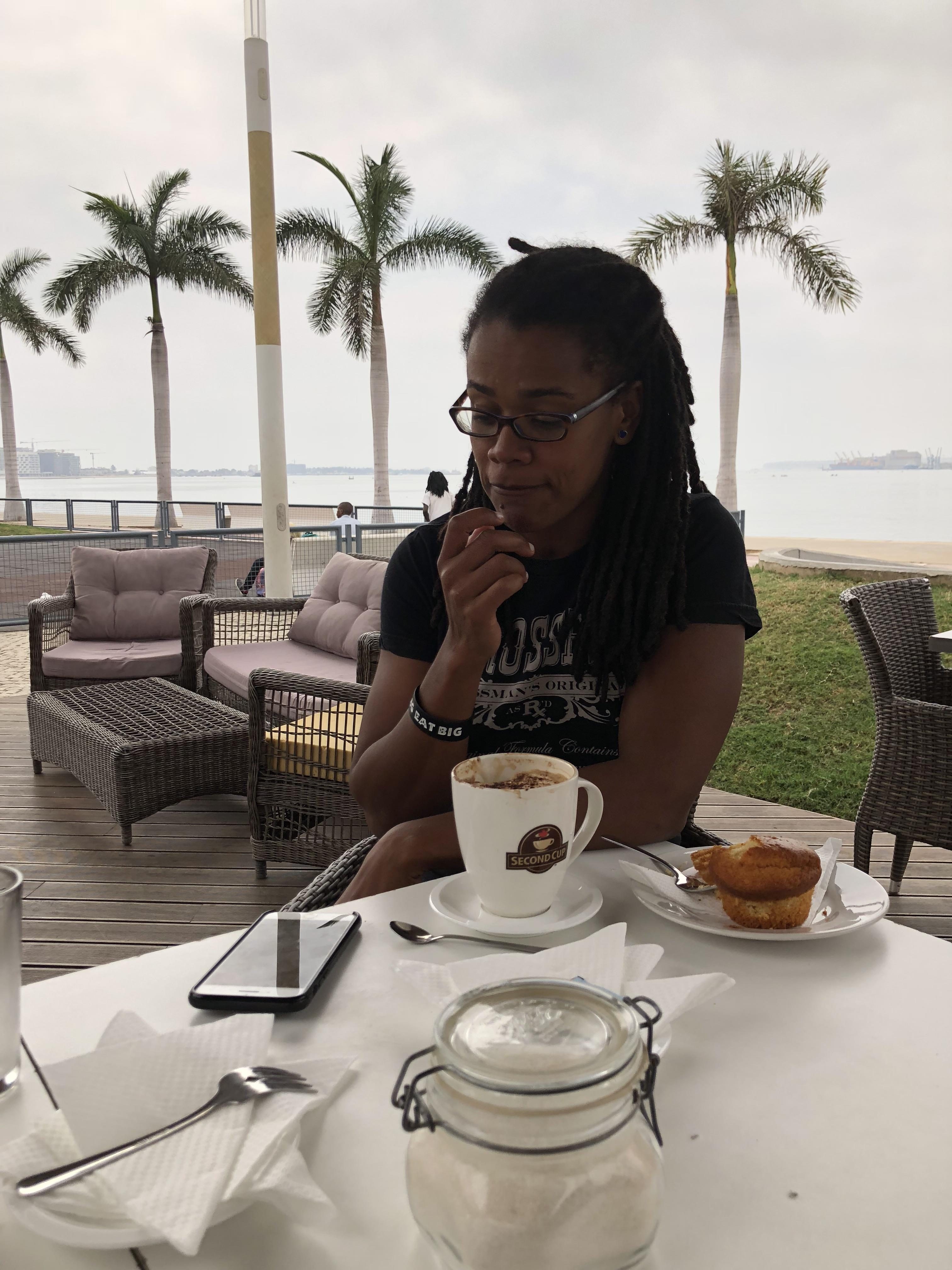 We’re at Second Cup, a coffee shop on the bay downtown

Linguistic note: Luanda is the Portuguese variation of Olanda (Holland). The Portuguese and the Dutch have battled it out here for centuries.

We spent the afternoon a TAP, the Portuguese airline, sorting out our departure for Lisbon on Saturday. What we imagined would be a 15-minute interaction extended almost ad infinitum.

We were helped by a very nice young woman … until we didn’t see her for a while and then had to surmise she went to lunch (or whatever). We left a few hours later with the documents we needed.

The second half of our Day Five endeavors were aided by Indira, a friend of Carla’s. 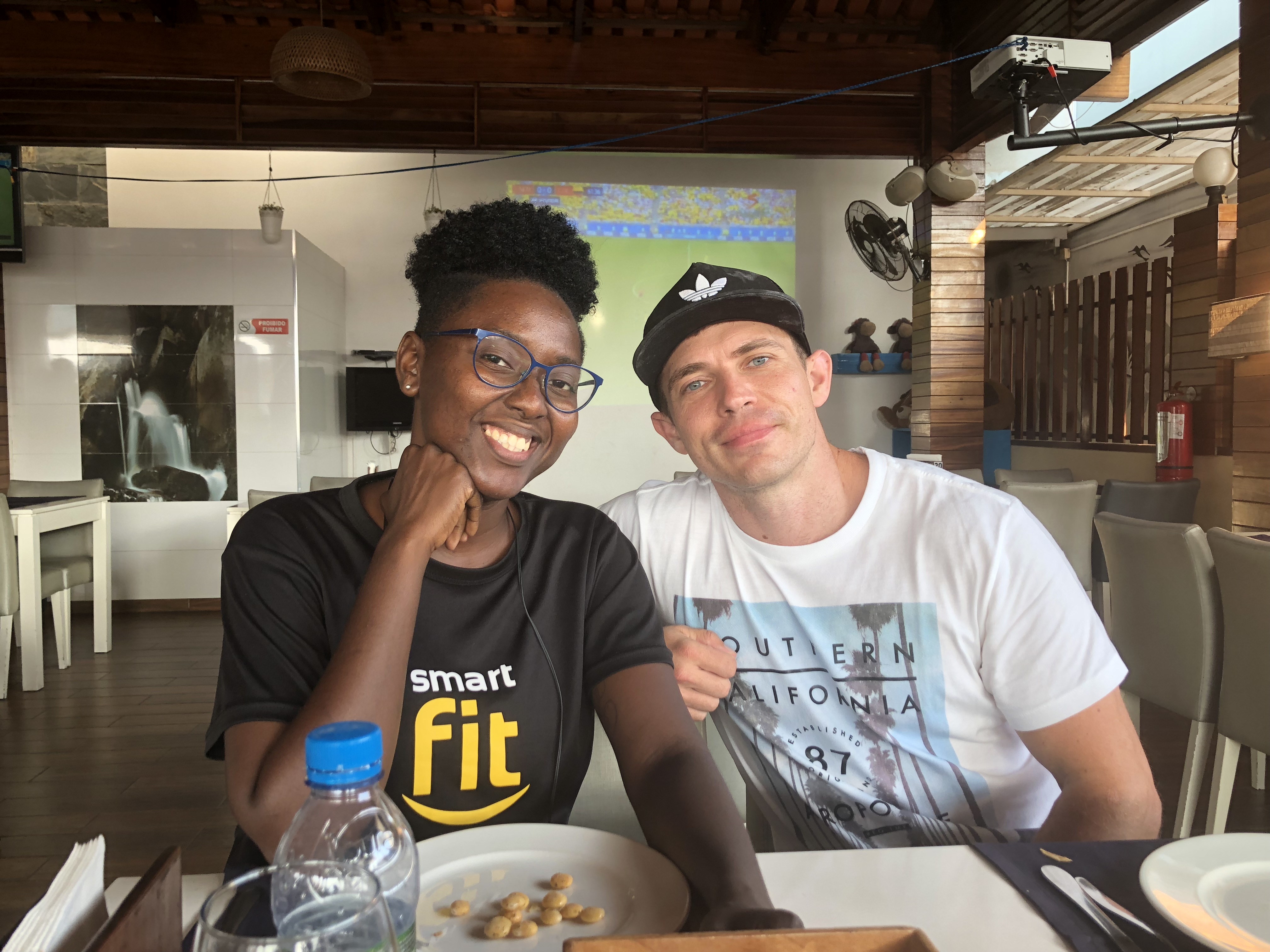 She took us to dinner at Galeria dos Pães in Talatona: 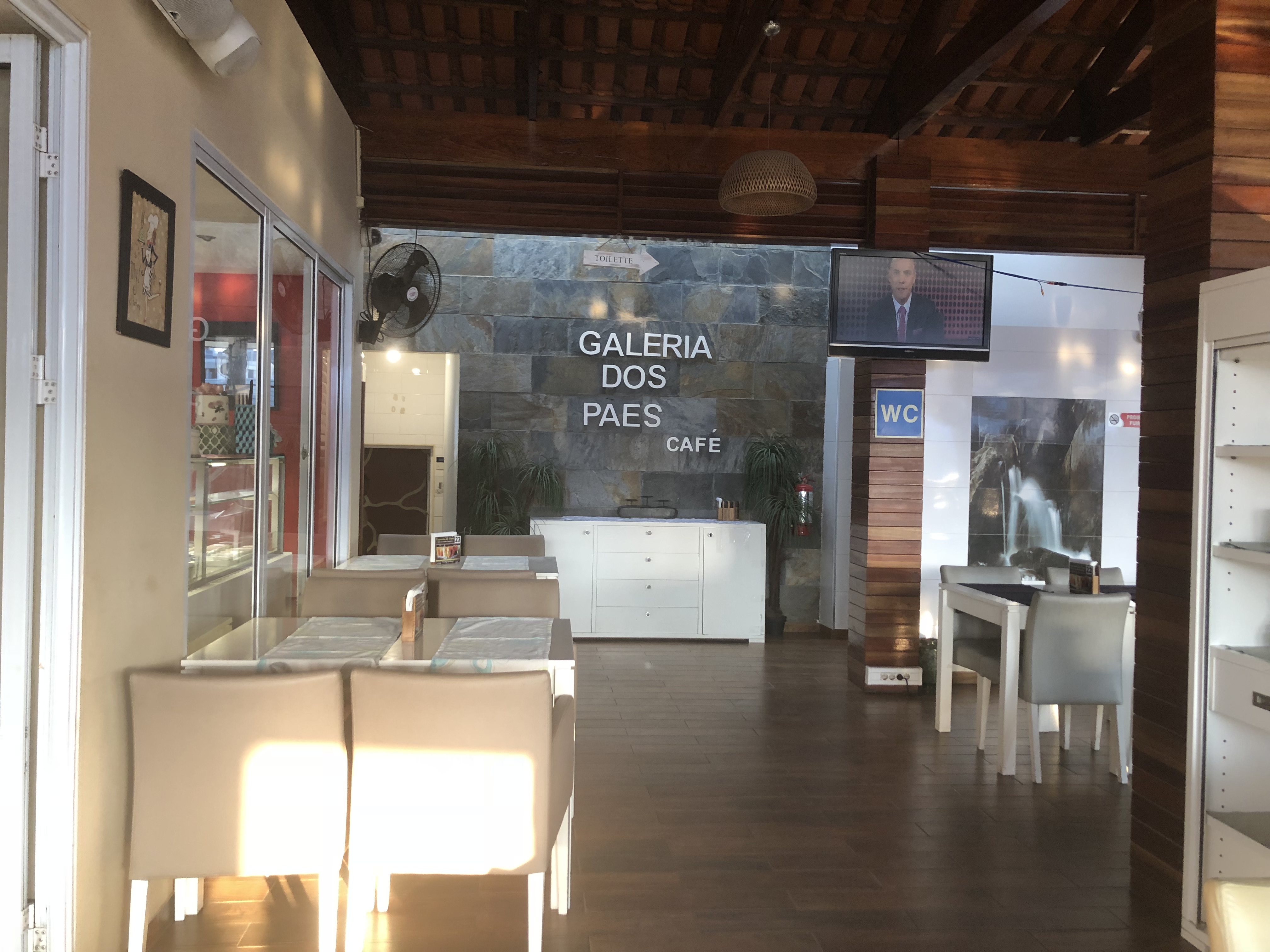 I accepted the loss of my luggage. I had passed in review what I had packed and realized that, apart from the gifts I bought in Ethiopia, I could live without whatever. 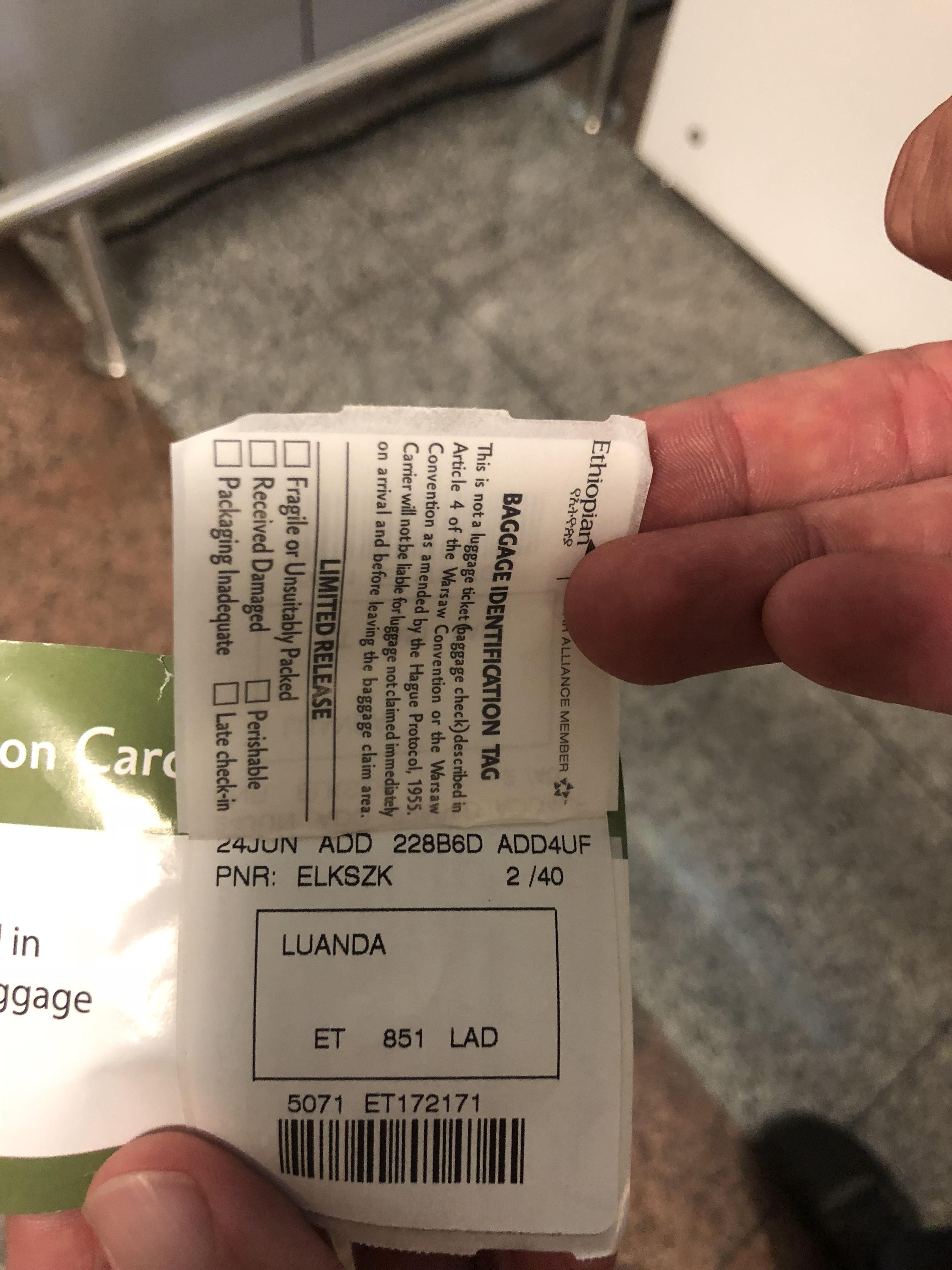 Ah, the tags for the baggage, now a fond memory

I went to a gourmet lunch at the home of Alba, a friend of Carla’s. She has a beautiful patio: 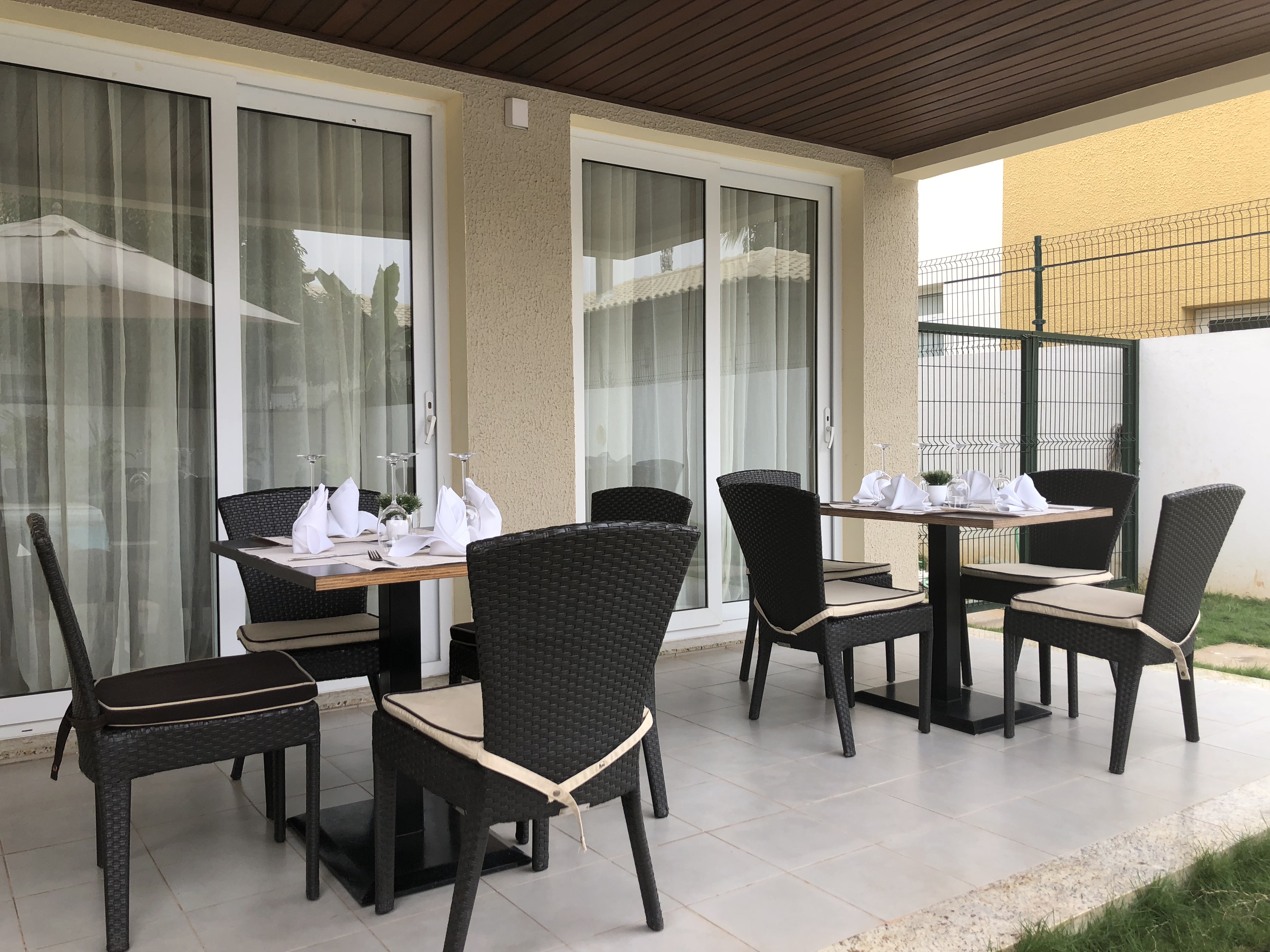 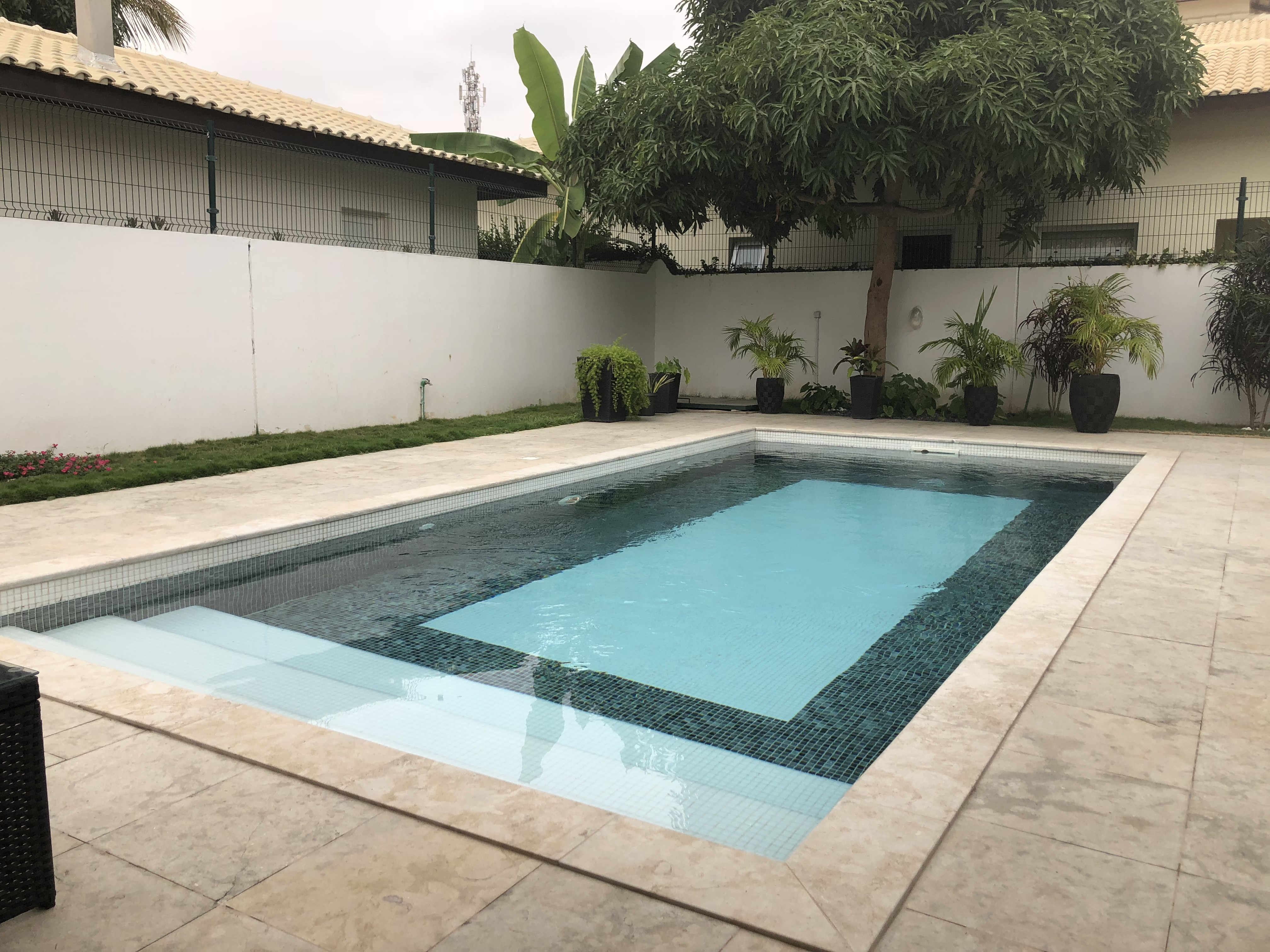 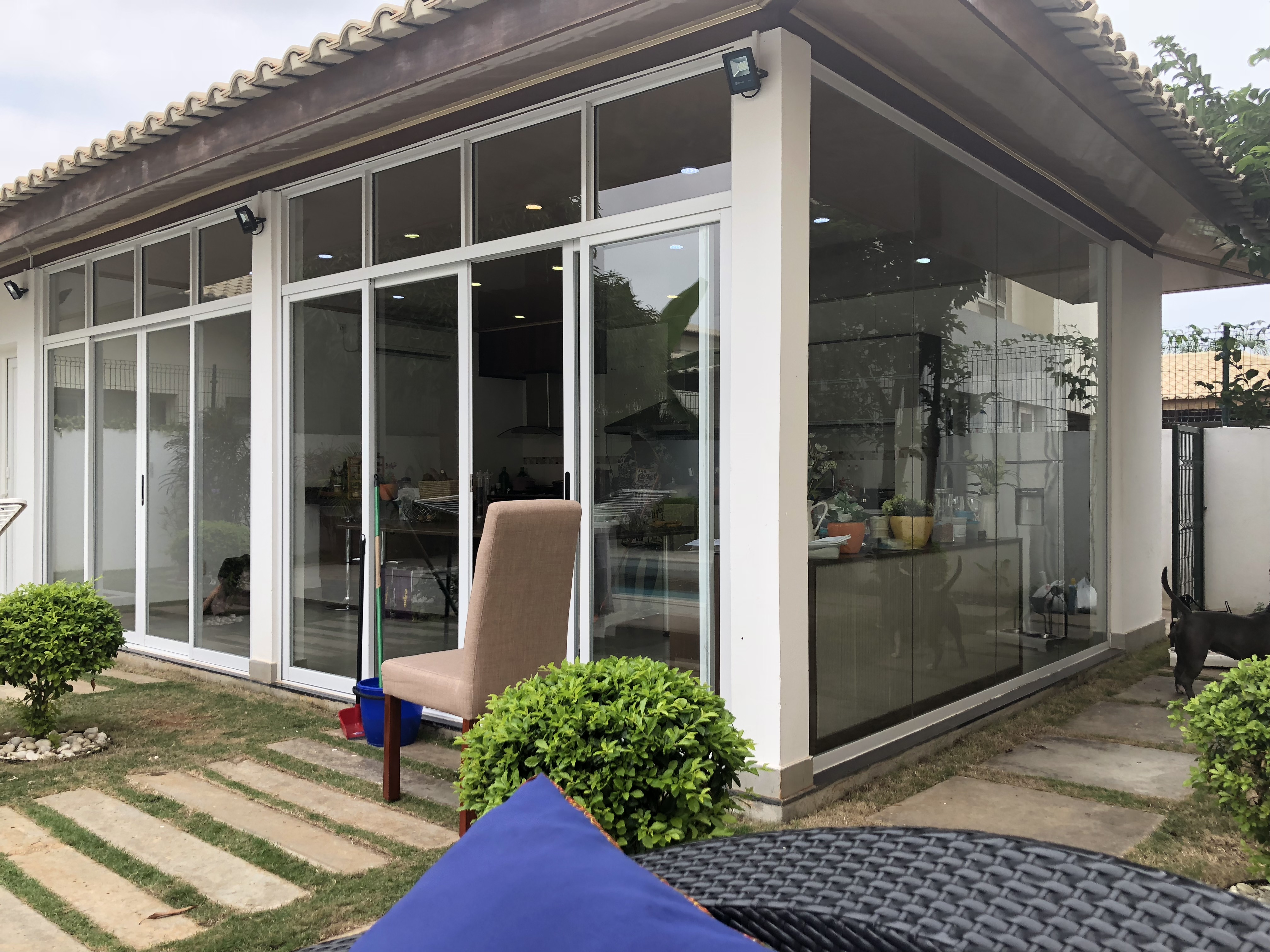 Chef Alba with some of her guests: 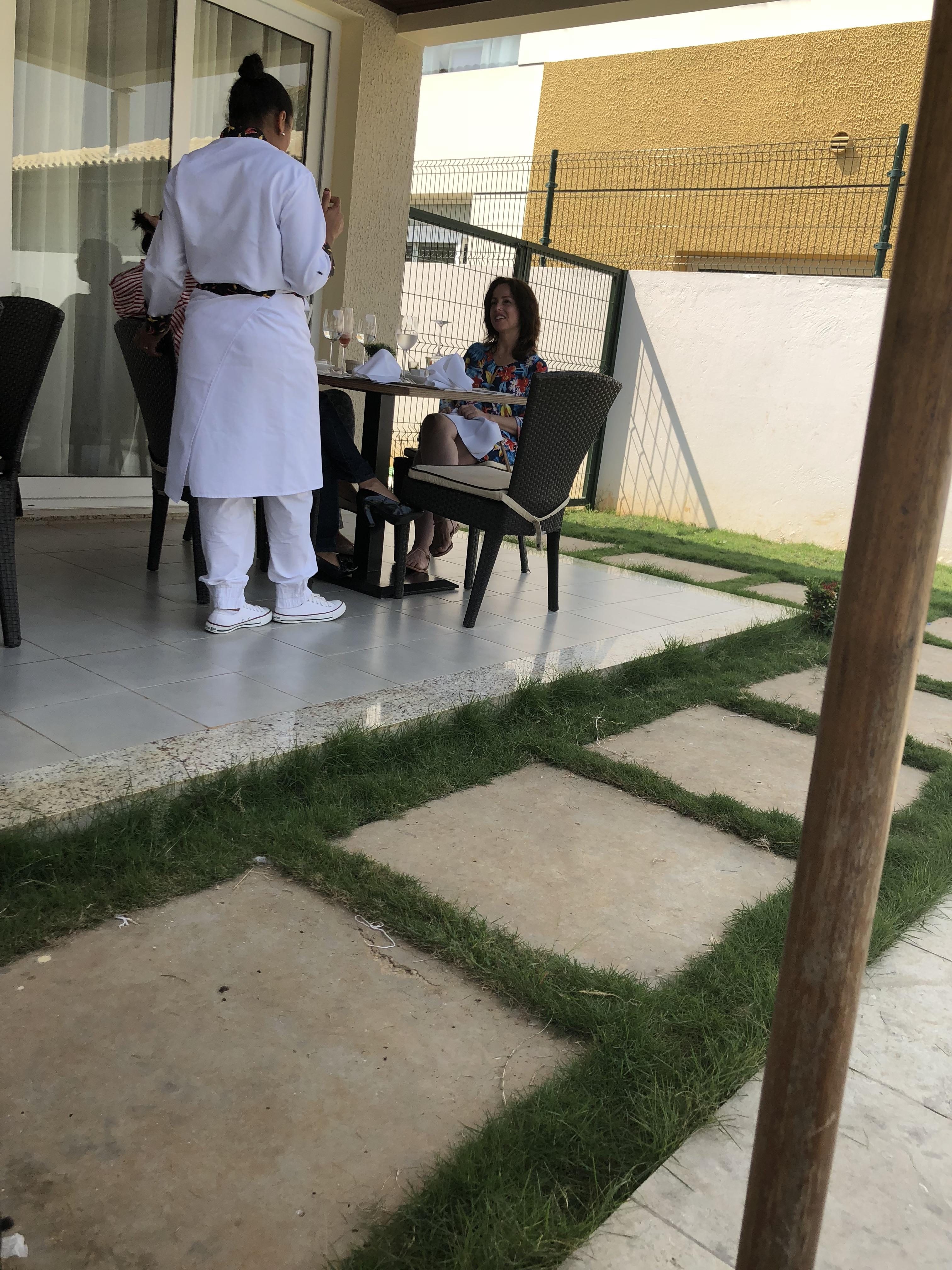 Alba is a financial planner. She is a gourmet cook only as a hobby

and one of her amazing dishes: 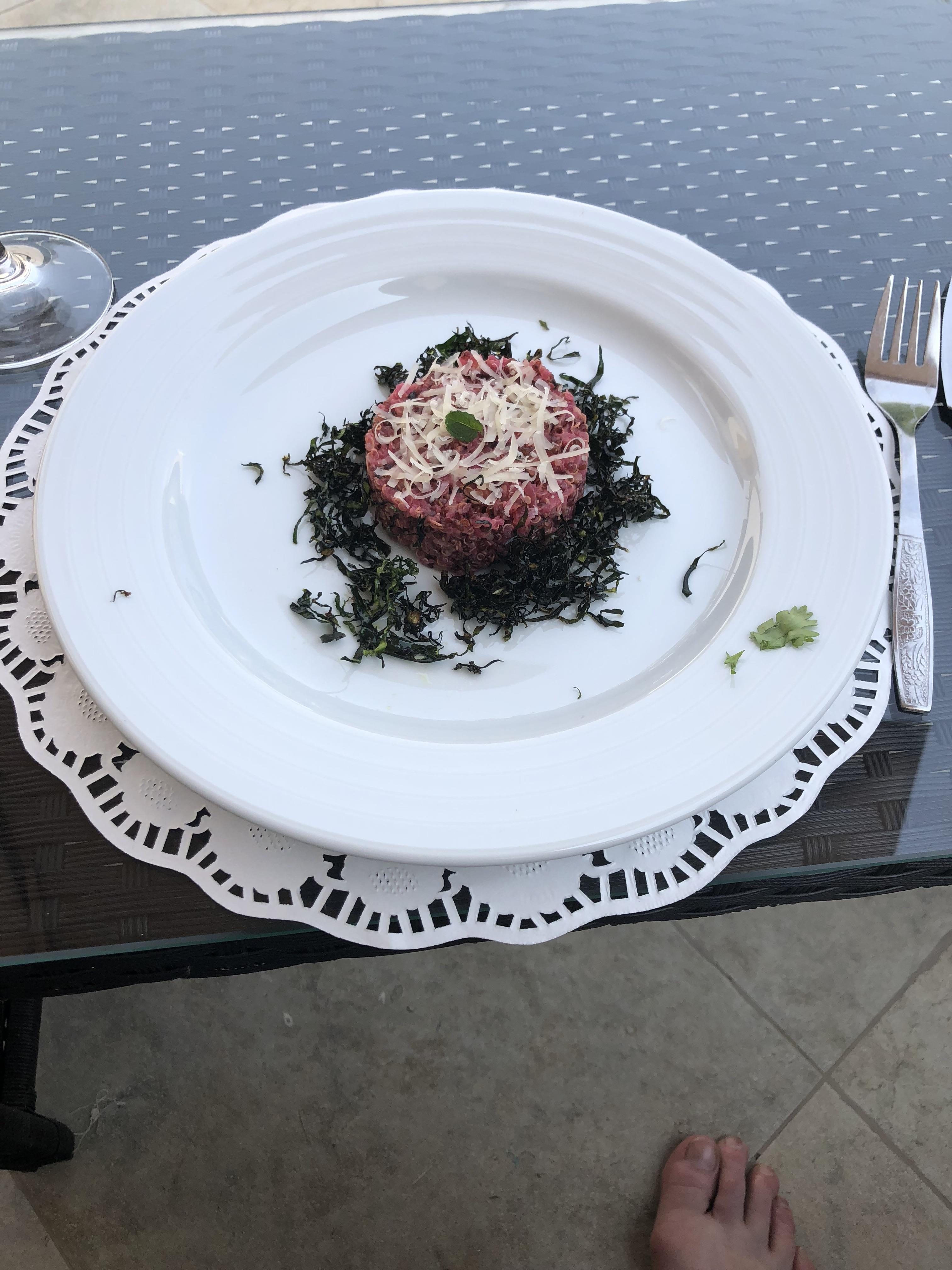 This is quinoa flavored with sugar beet

Carla drove us to the airport for our evening flight to Lisbon. On the way, we stopped for coffee at a great oceanside restaurant, Coconuts. 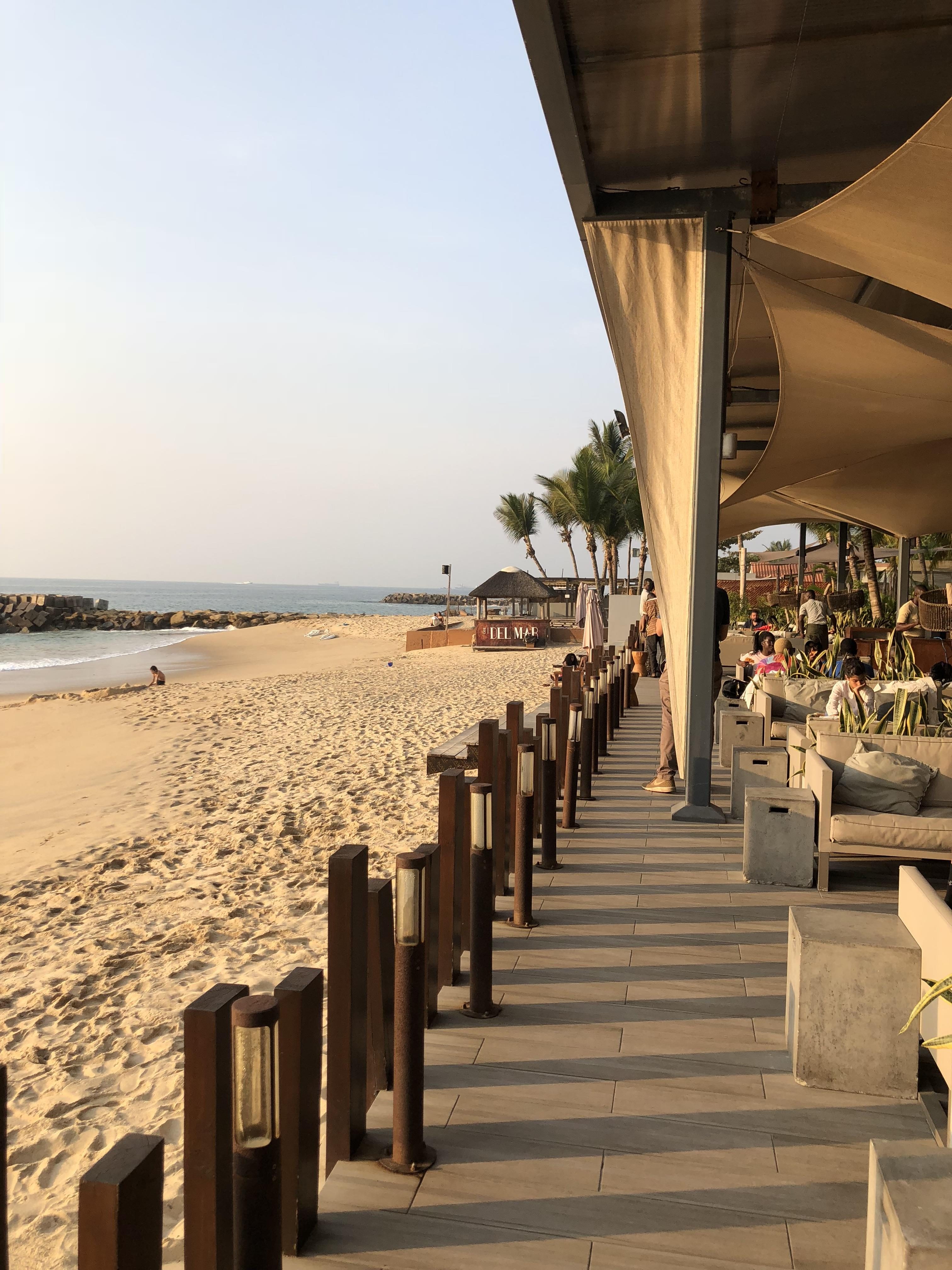 We got to the airport to discover that our flight to Lisbon had been canceled. Lucky us! One more night in Angola. The good news was that we were given lodgings in the downtown Hotel Presidente – very nice.

Me, I got myself to the bar on the 8th floor with great views of the waterfront. 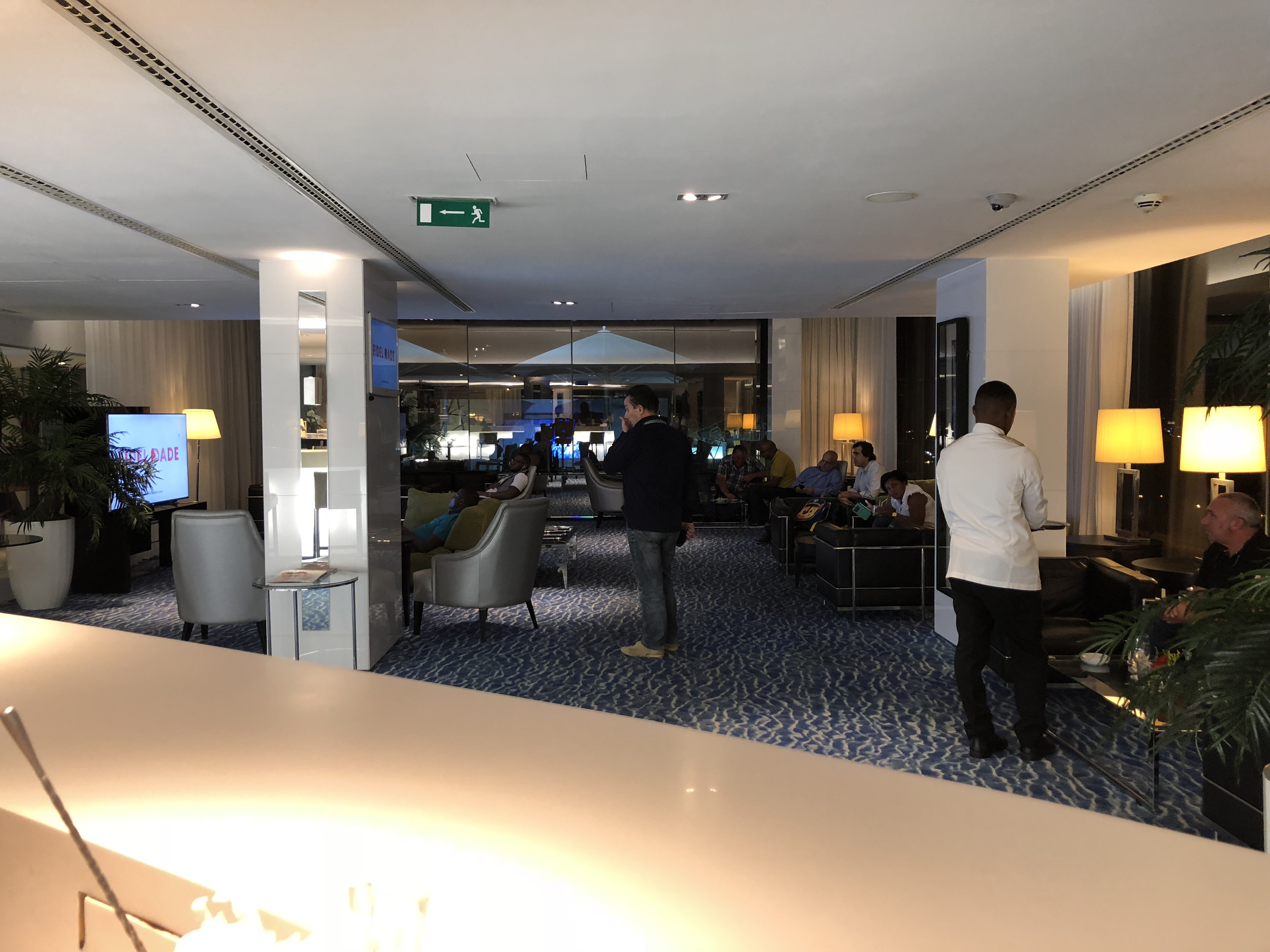 Everyone was watching the World Cup (except me, of course)

The edge on the stay at the swank Hotel Presidente was a bit taken off by the fact that we had to meet in the lobby around 4:30 the next morning (for our fabulous Day Eight). Then we hurried up and got to the airport for the 7:00 am flight … that didn’t leave until 9:00.

We left for Lisbon, having spent most of the time sitting either at the airport or in some office or another, either trying to get our luggage or our passage out of the country.

Did we experience Luanda? In fact, I think we did.

If you need to know more about my travel troubles, see: Unusual Travel Tips: The Bad, The Worse, the ???