The question can now be asked: What the heck were we doing in Angola? And why was our next stop Portugal? The answer is: a curiosity to experience a part of Lusophonia, namely Lusophone (= Portuguese-speaking) Africa. The title image map tells the story.

How did we come up with this idea? Well …. we were on an Air Ethiopia flight from Addis Ababa to Bahir Dar, leafing through our inflight magazines when we came upon the flight routes at the back. Phillip said, “Oh, look there’s a direct flight from Addis to Luanda. We can go visit Carla.” 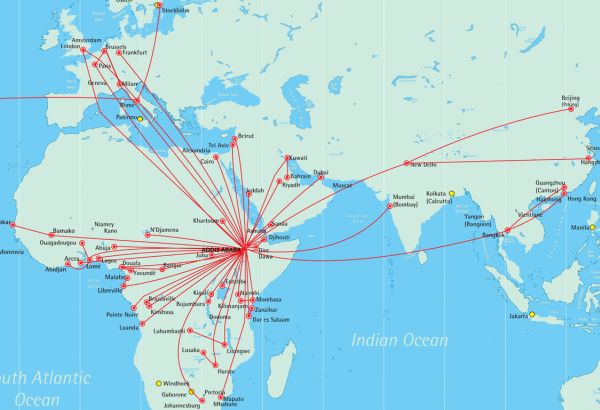 Addis-Luanda is a 5+-hour flight, to give you an idea of distances

Of course I thought this was a perfectly reasonable idea.

So after Angola, the obvious next stop would be Portugal, because Luanda has so many Portuguese (and Brazilian) ex-pats that flights between Luanda and Lisbon are plentiful (if not always reliable, see Day Eight of Angola in Seven Days).

That was the thinking, and it seemed like a good idea … until all our sad troubles began at the Luanda Airport. But they’re behind us now.

The Portuguese were the first to plunge out into the Atlantic and start colonizing. Already in 1419 Portuguese were exploring the West Coast of Africa. Then under the aegis of Prince Henry known as the Navigator (1394-1460) Portuguese explorers began to sail the globe. They reached India by 1498, Brazil by 1500 and Japan by 1542.

(To remind you: Christopher Columbus was Italian and sailed under the Spanish flag.)

Here is the world mapped out by Portuguese explorers around 1500:

This is called the Cantino world map after Albert Cantino, an agent of the Duke of Ferrara who smuggled it from Portugal to Italy in 1502

You can see Africa well drawn with India a bit out of proportion but coastal Brazil is defined, with part of the Caribbean. Is that Florida sticking out and making an appearance in the top quarter of the left hand side of the map?

The following countries have Portuguese as an official language and have significant portions of the population who speak it as a first or second language, with population figures:

In East Timor (pop: 1.3m) and Macau (pop: 600K) Portuguese is an official language but spoken by only a minority of the population.

I now have a hankering to go to Maputo, Mozambique and look around the capital and then explore the countryside.

Further historical note: Lusitania was the name of the Roman province that corresponds, more or less, to present-day Portugal.