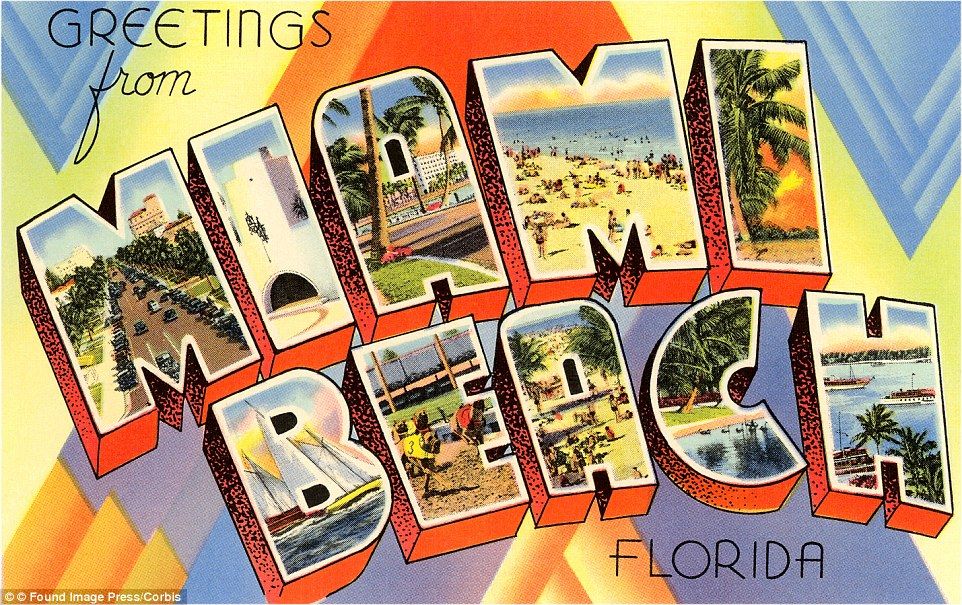 Florida is such a strange, compelling place for me. And I am finding Miami ever-more fascinating. In my continuing exploration of the city I went to Miami Beach, aka South Beach, this week and took in the magnificence of 7 miles of white sand. It’s difficult to capture without an aerial view. Here’s my try: 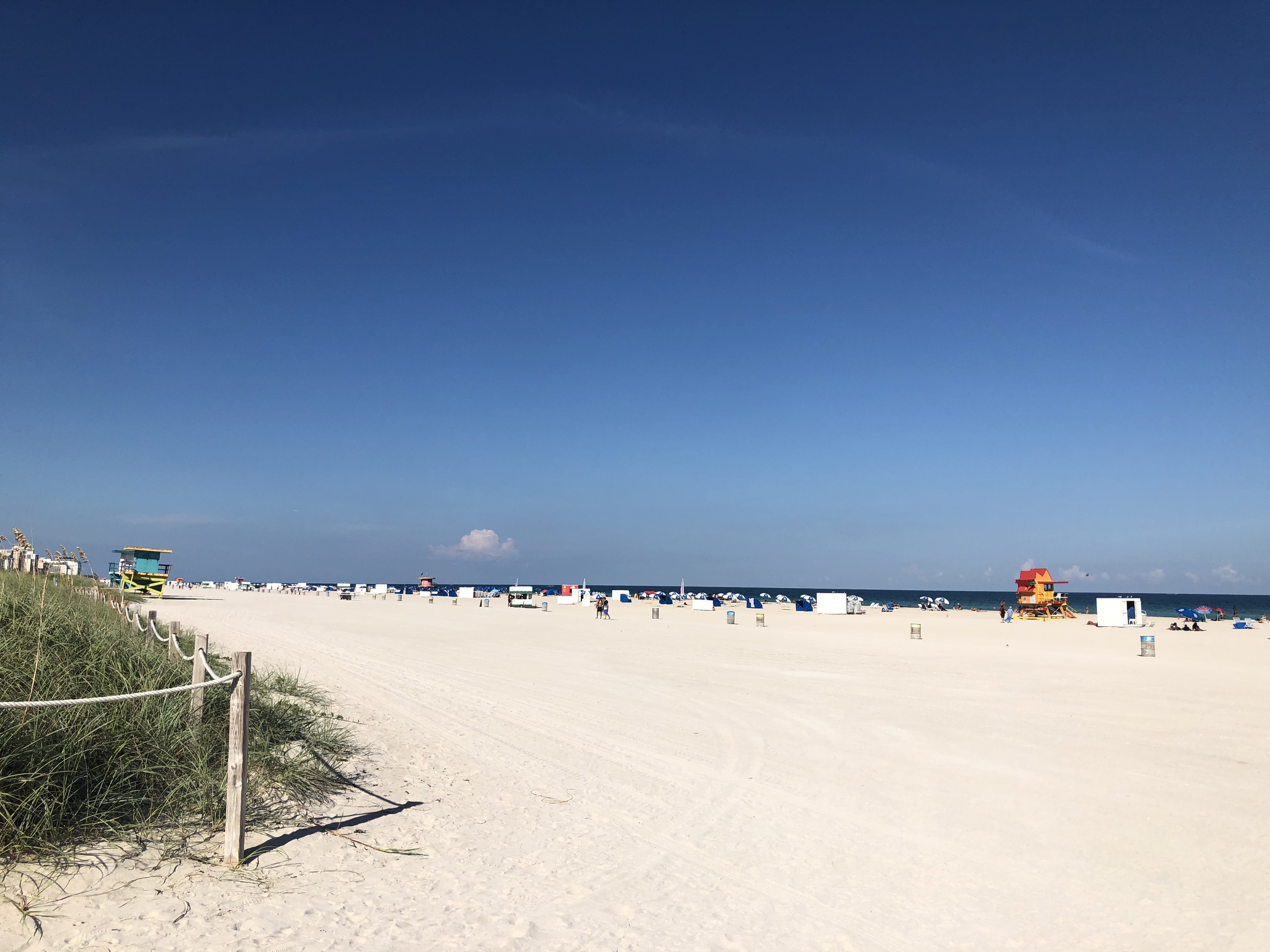 Broad and beautiful. But then I discover it’s man-made. So I figure a vintage postcard is perfect for the title image for this blog post. Florida is all tropical orange and yellow kitsch cheerfully trying to tame a unique ecosystem that may one day either collapse or get its revenge. In the meantime: Wish you were here!

In the 1870s Miami Beach was little more than a sandbar with mangroves. As a point of information, mangroves are shrub-or-tree-like vegetation found in the tropics along shorelines. Their roots go deep in the water to actually form the shoreline. They also thereby protect it. 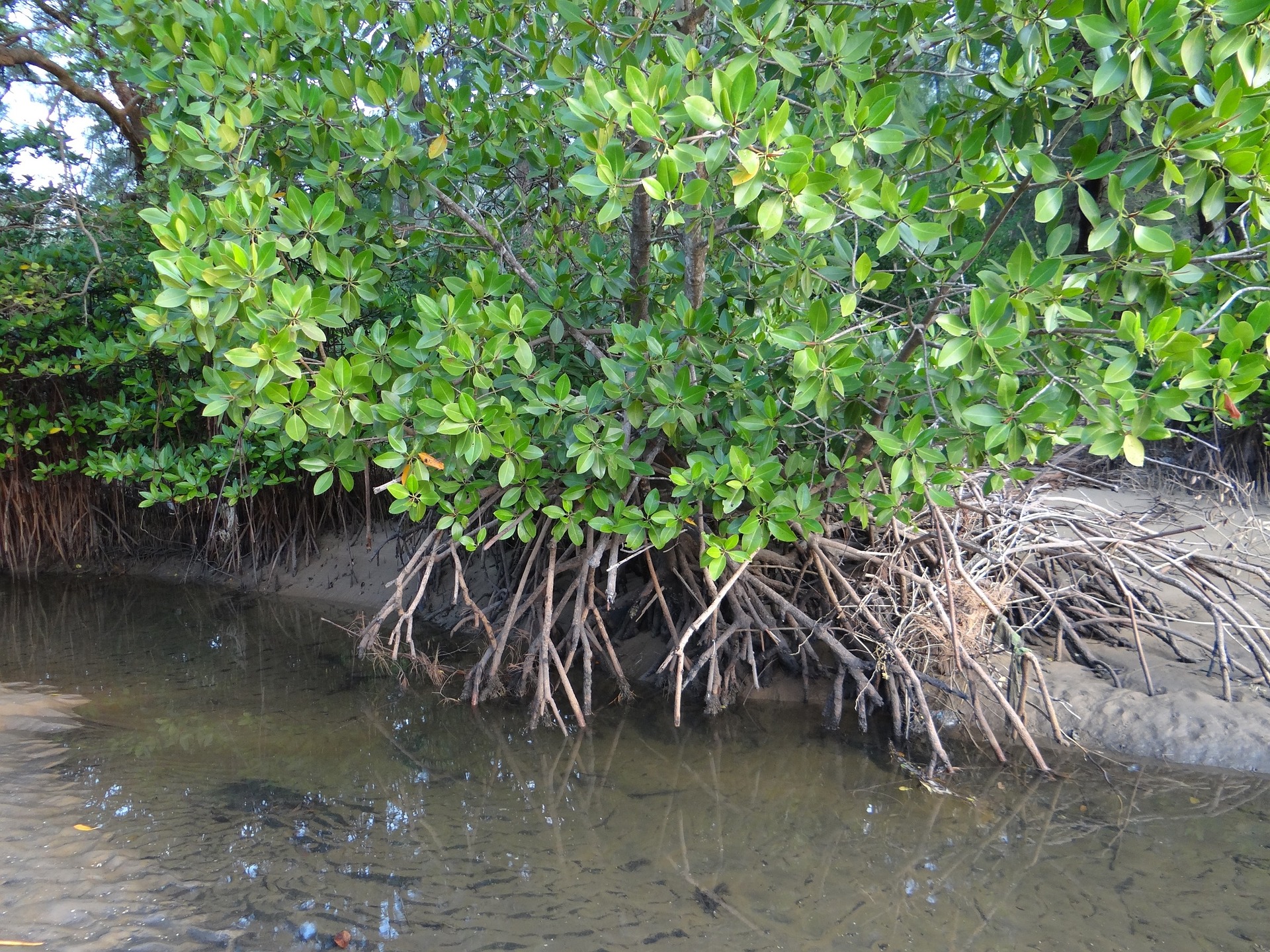 Furthermore, it is said that mangroves act as the kidneys for coastal waters, maintaining a healthy balance between them and the saline ocean.

In the early part of the 20th century the jungle and mangroves on the sandbar were cleared and deep dredging created land. The Town of Miami came into existence in 1915. Wealthy folks from the North and Midwest built vacation homes. The good times rolled to an end with the Great Miami Hurricane of 1926.

Here’s a view of the extent of the damage on South Beach. 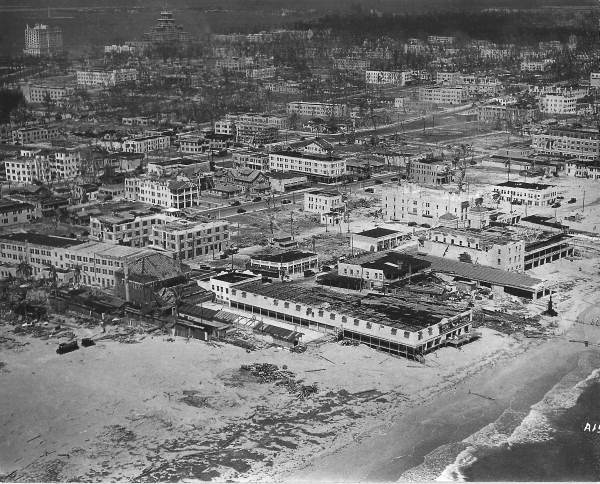 The upside – okay, let’s call it that – was that Miami Beach was now a blank slate. The major architectural movement at the time was Art Deco. So ….

Today Miami has the highest concentration of Art Deco buildings in the world. Ocean Drive is lined with them. 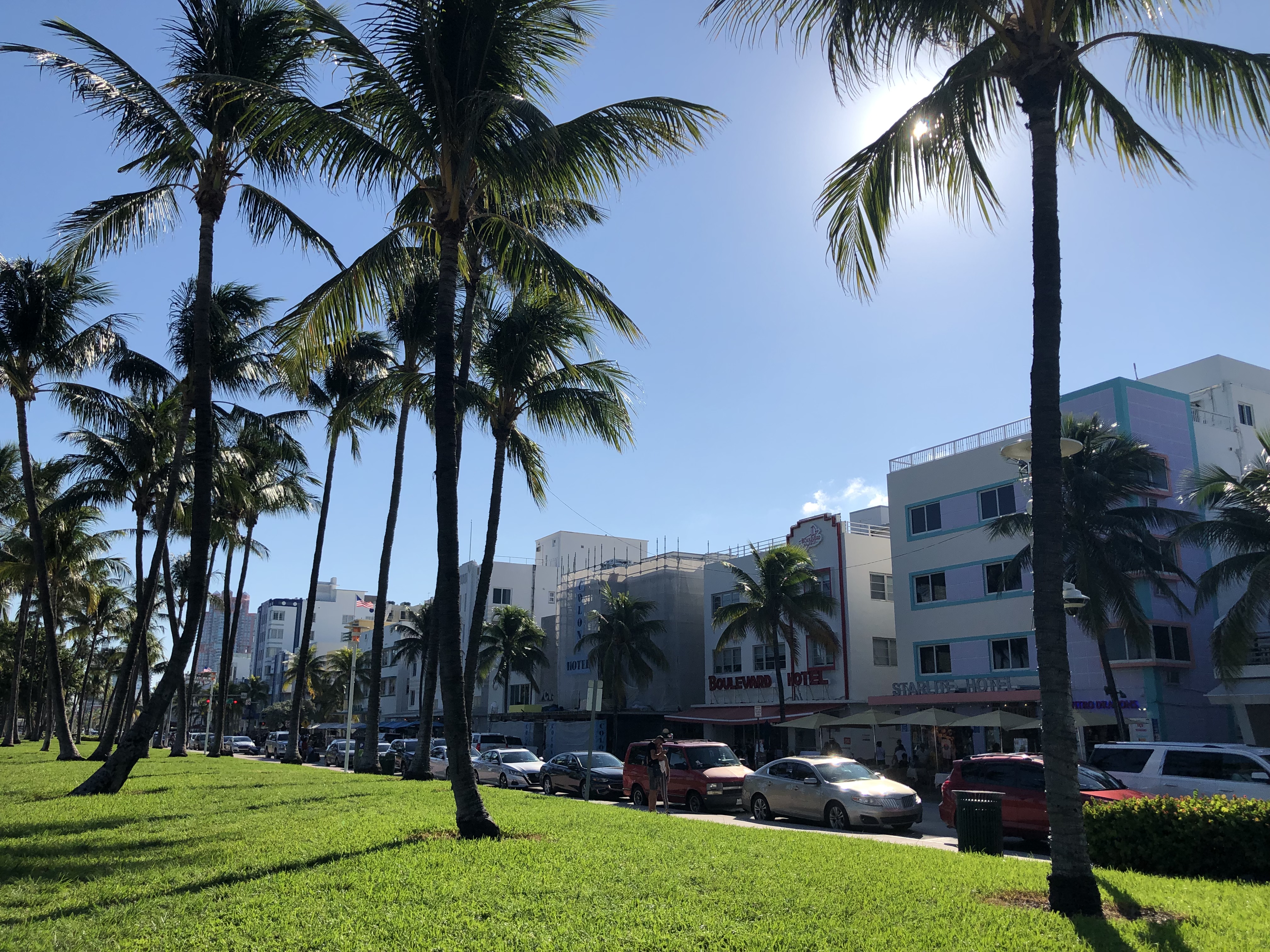 No need to show you every last one. A sampling will do. There’s the Beacon: 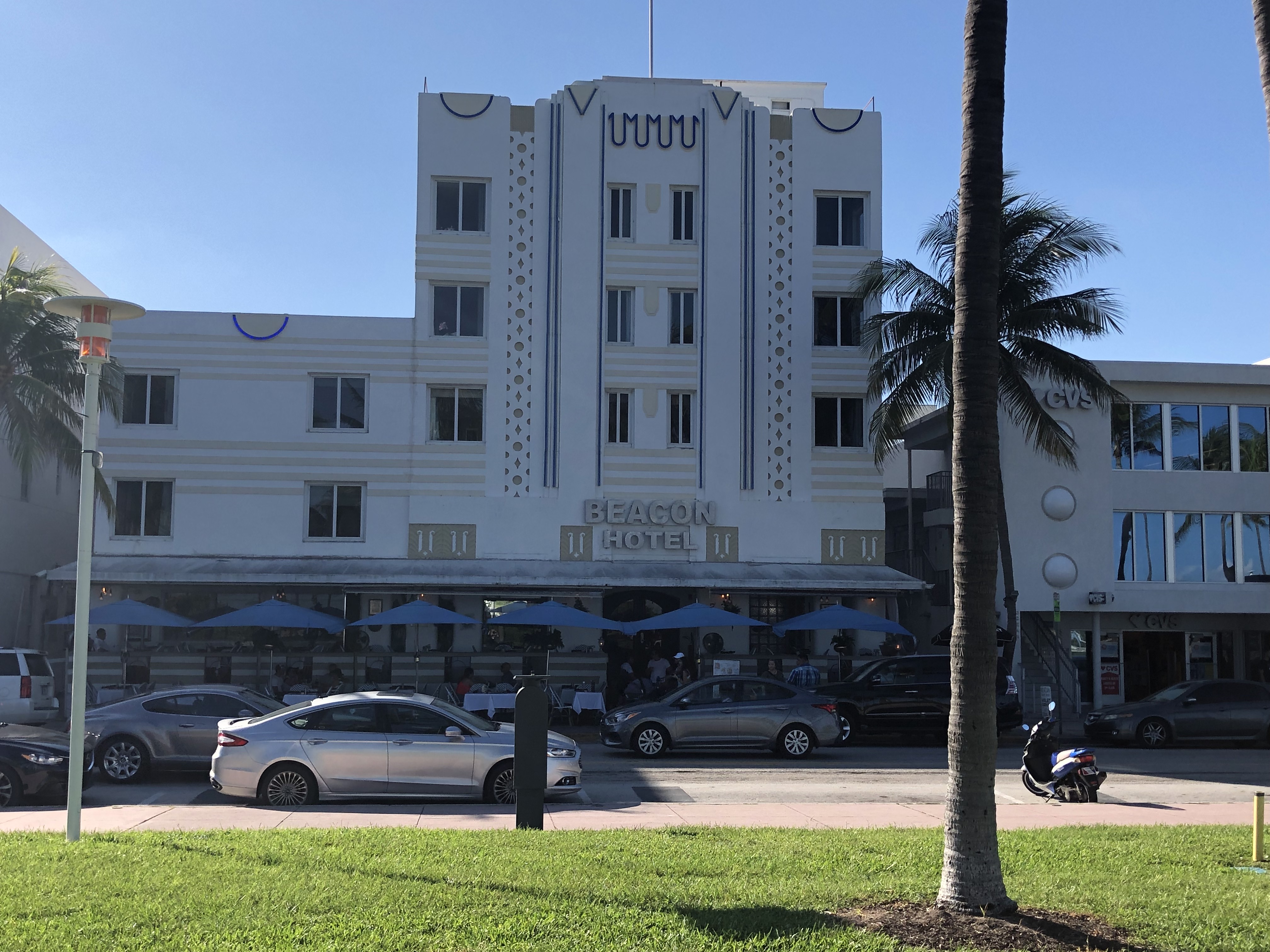 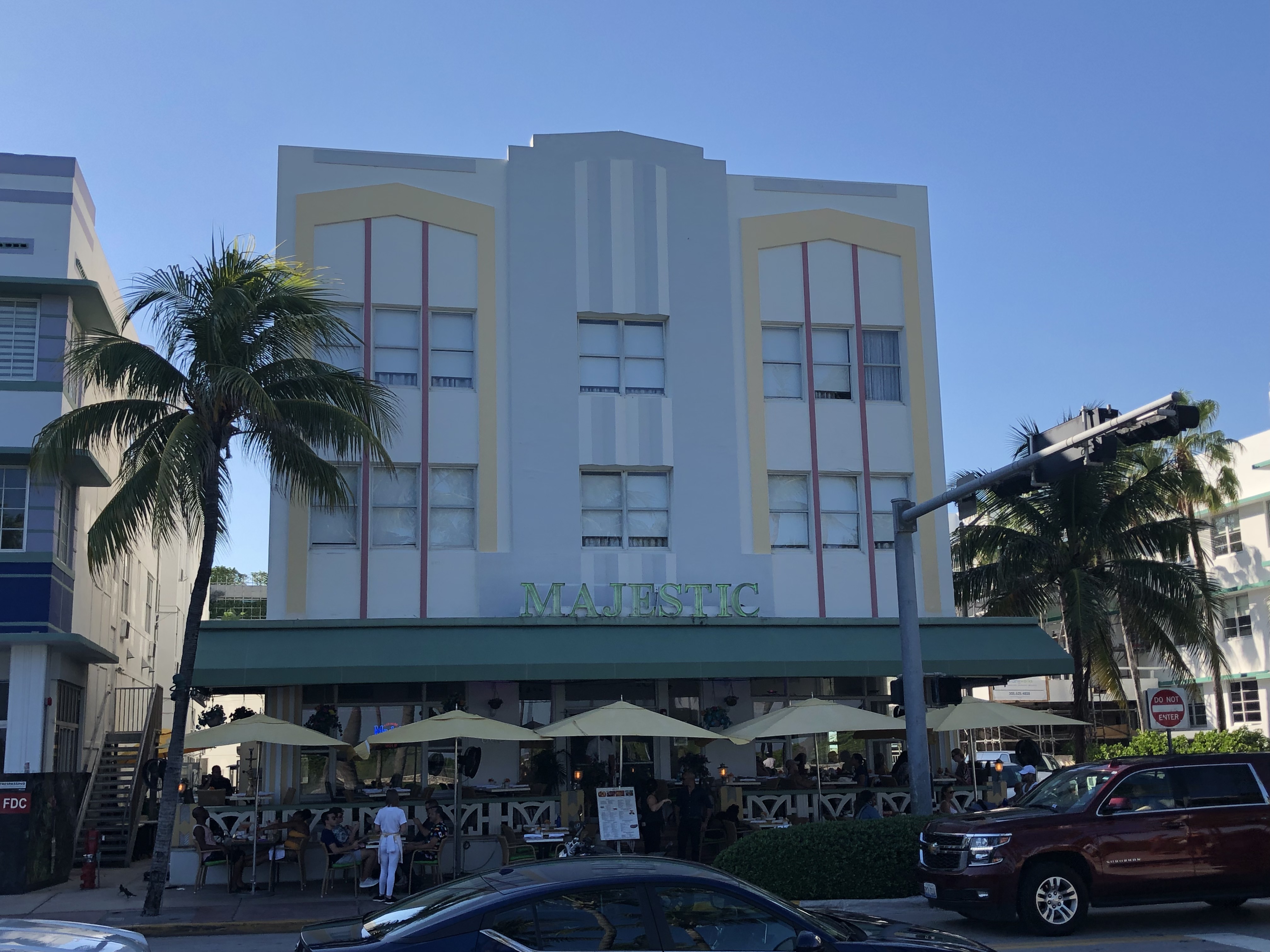 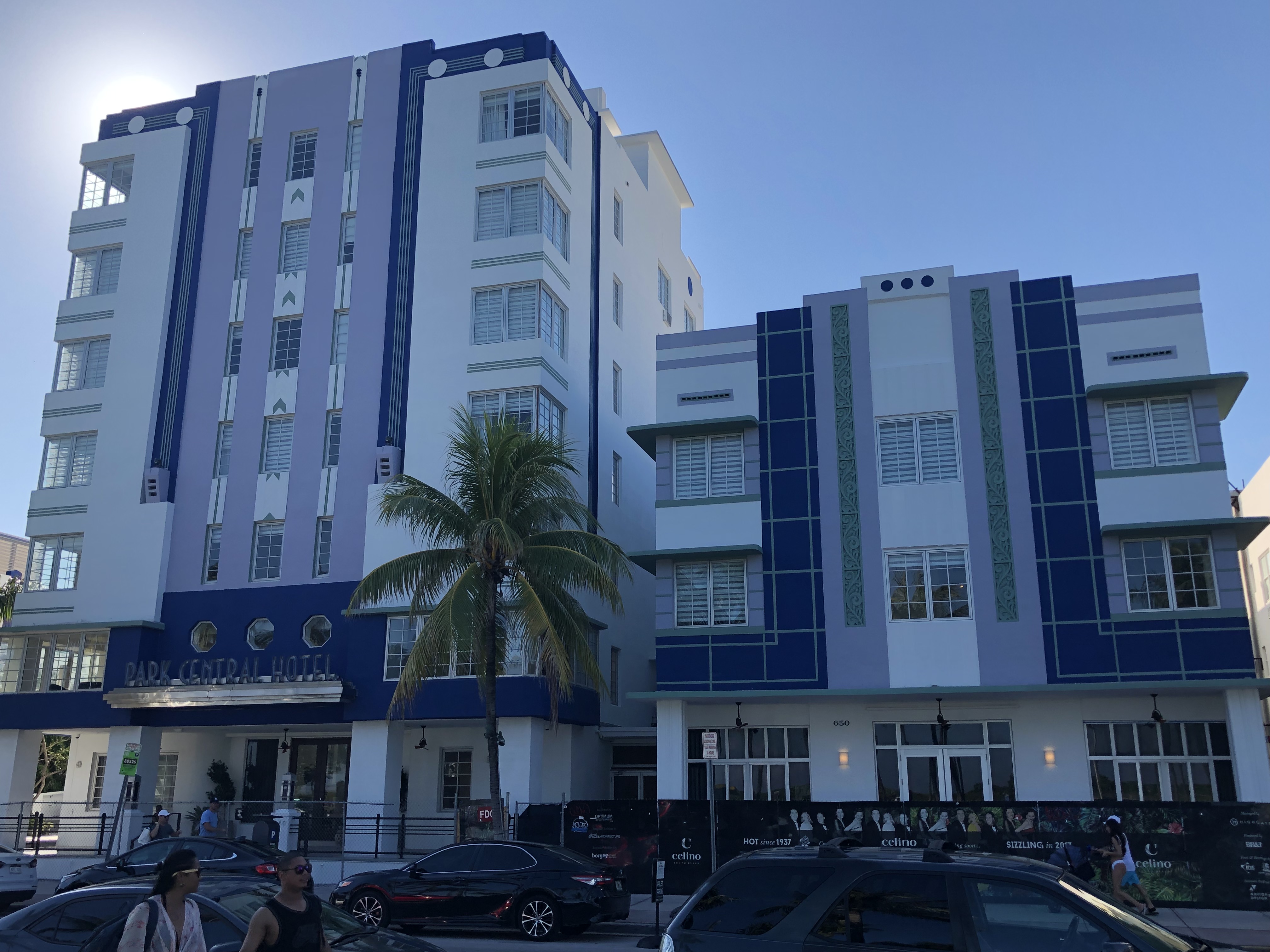 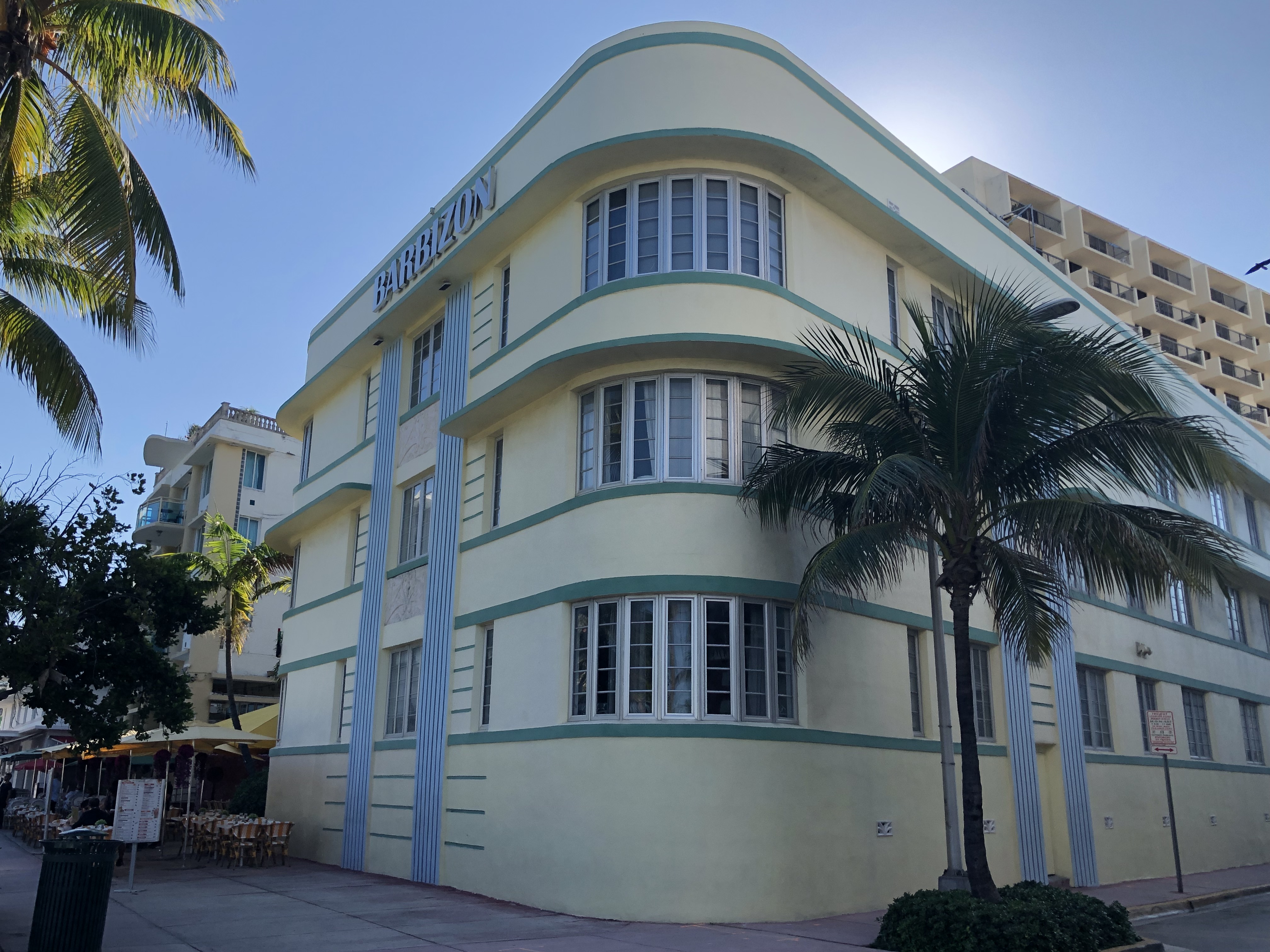 To name only a few of dozens if not hundreds of examples.

In the 1970s developers wanted to tear them down to build high-rises, like there are all over downtown Miami. Preservationists prevailed.

I went on a Monday afternoon. The streets were busy, bars and restaurants full. I heard French, Portuguese, German and, of course, lots of Spanish.

All in all South Beach is an upscale playground. Between Ocean Drive and the water are ample volleyball courts: 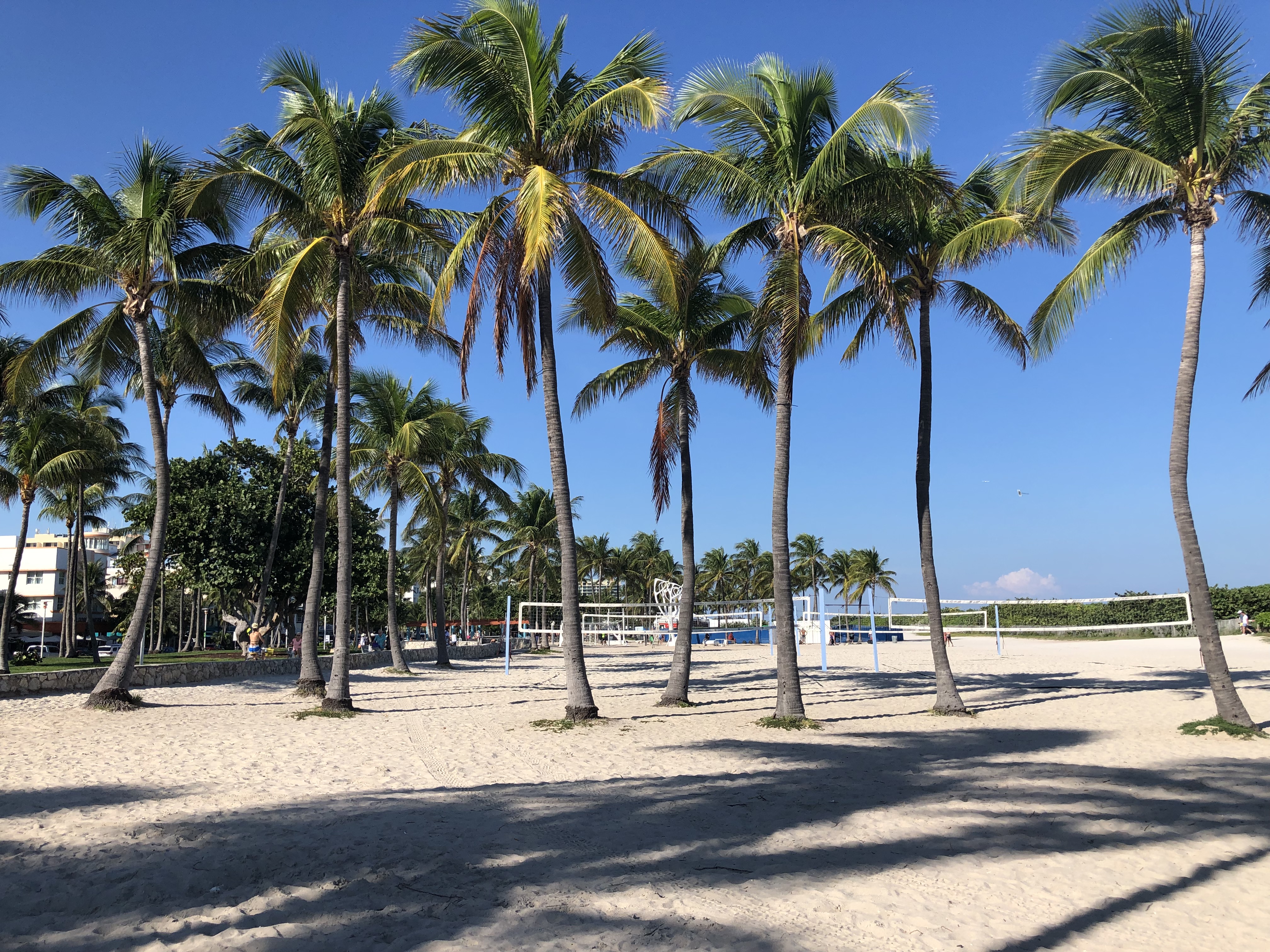 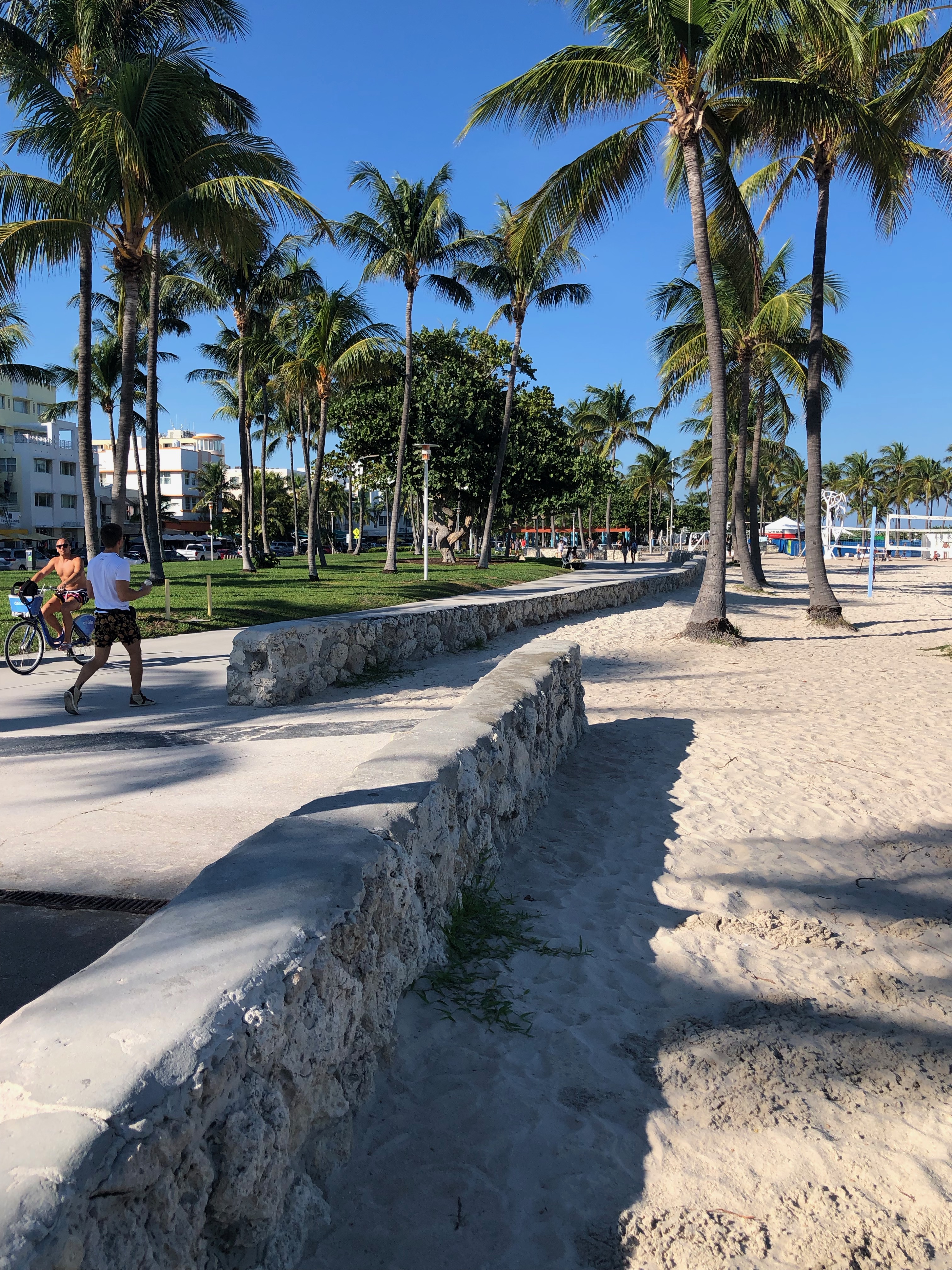 Designer Isaac Stein has no fear for the future for South Beach. And this despite the sea level around Florida being 8 inches above where it was in 1950. Along with the speed with which it is rising. Now 1 inch per year.

Stein proposes to save South Beach with a mix of urban mangrove forest, buildings on stilts and citywide canals. He points to Venice and Dutch cities. “Bringing in water,” he says, “and inviting it to be part of the city can really add quality and value.”

I will add here life on Inlay Lake, Myanmar/Burma where life lived over water is the norm: 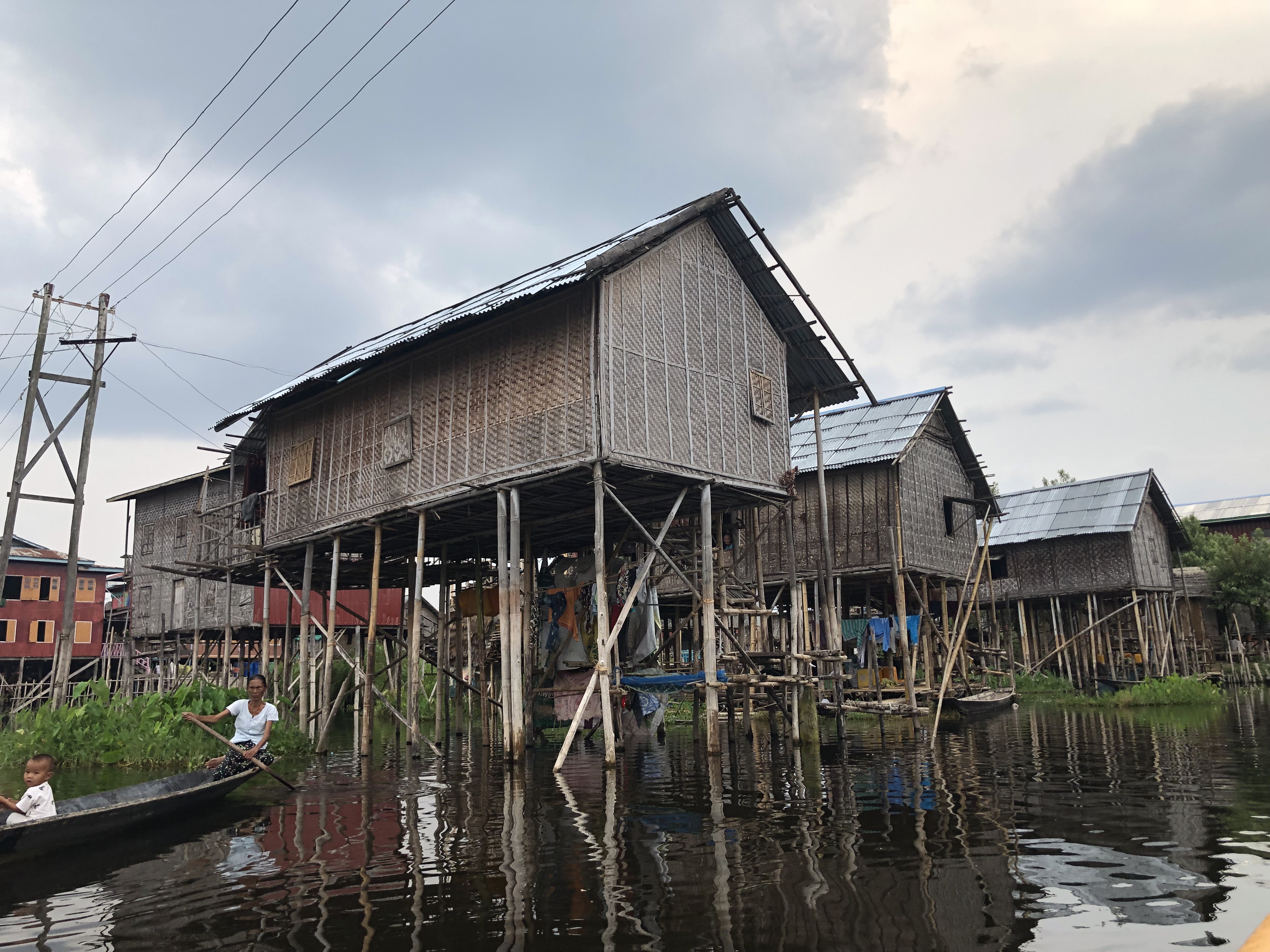 Can South Beach get all the Art Deco hotels up on stilts?

Back to Miami. Stein grew up in the Florida Panhandle and attended University of Miami School of Architecture. I love both his creativity and his positivity in imagining Miami bringing the water in as adding value

See: Mangroves, Stilts and Canals Might Just Save South Beach From Rising Seas

It’s impossible to think of South Beach without thinking of the Italian designer Gianni Versace. He was shot and killed on the steps of his mansion, Villa Casa Casuarina, on Ocean Drive in 1997. 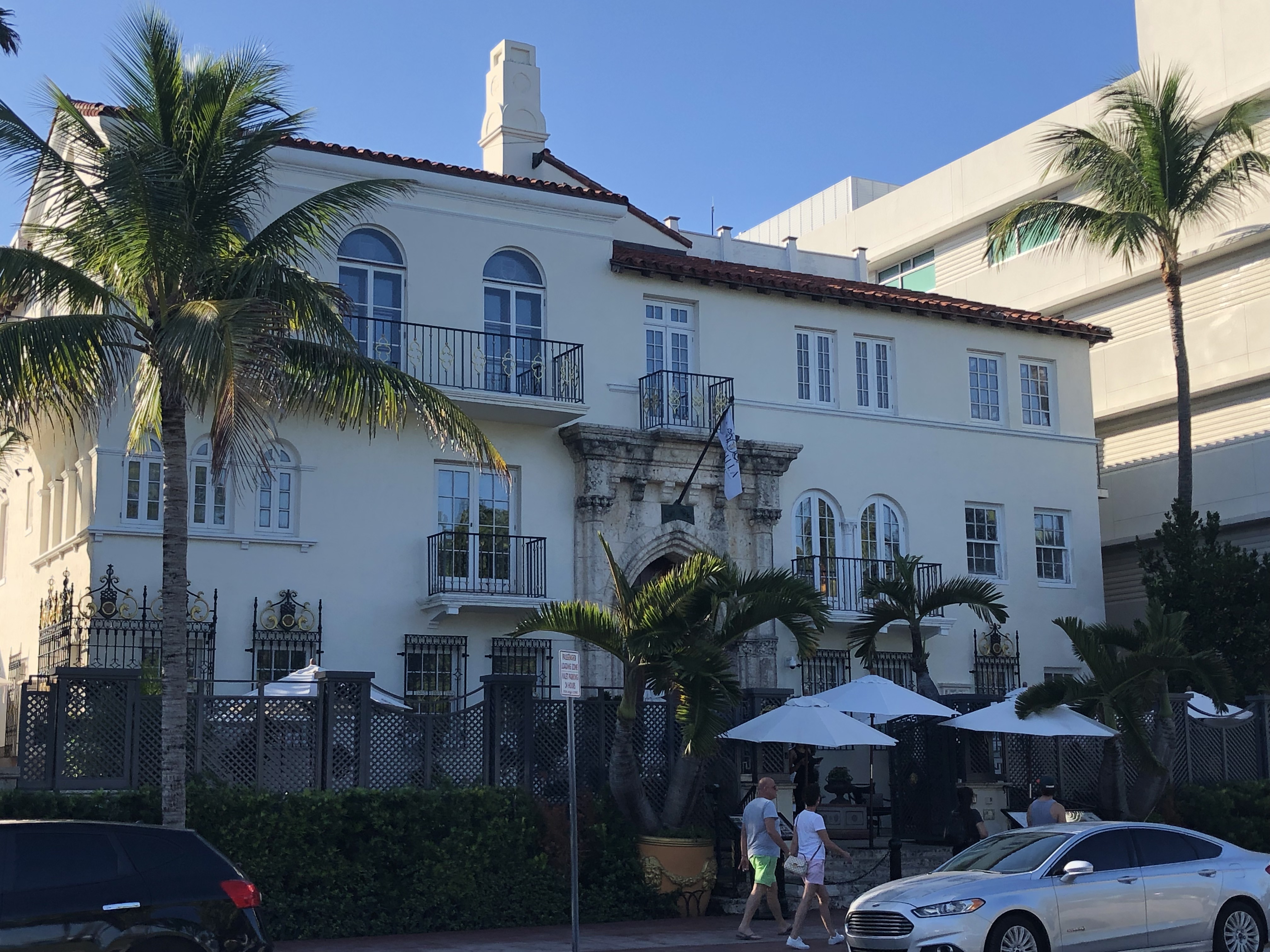 The man who killed him committed suicide a few days later. No one has ever been able to determine a motive.

The villa is now a restaurant with a Mediterranean menu.

I’ll leave you with this: 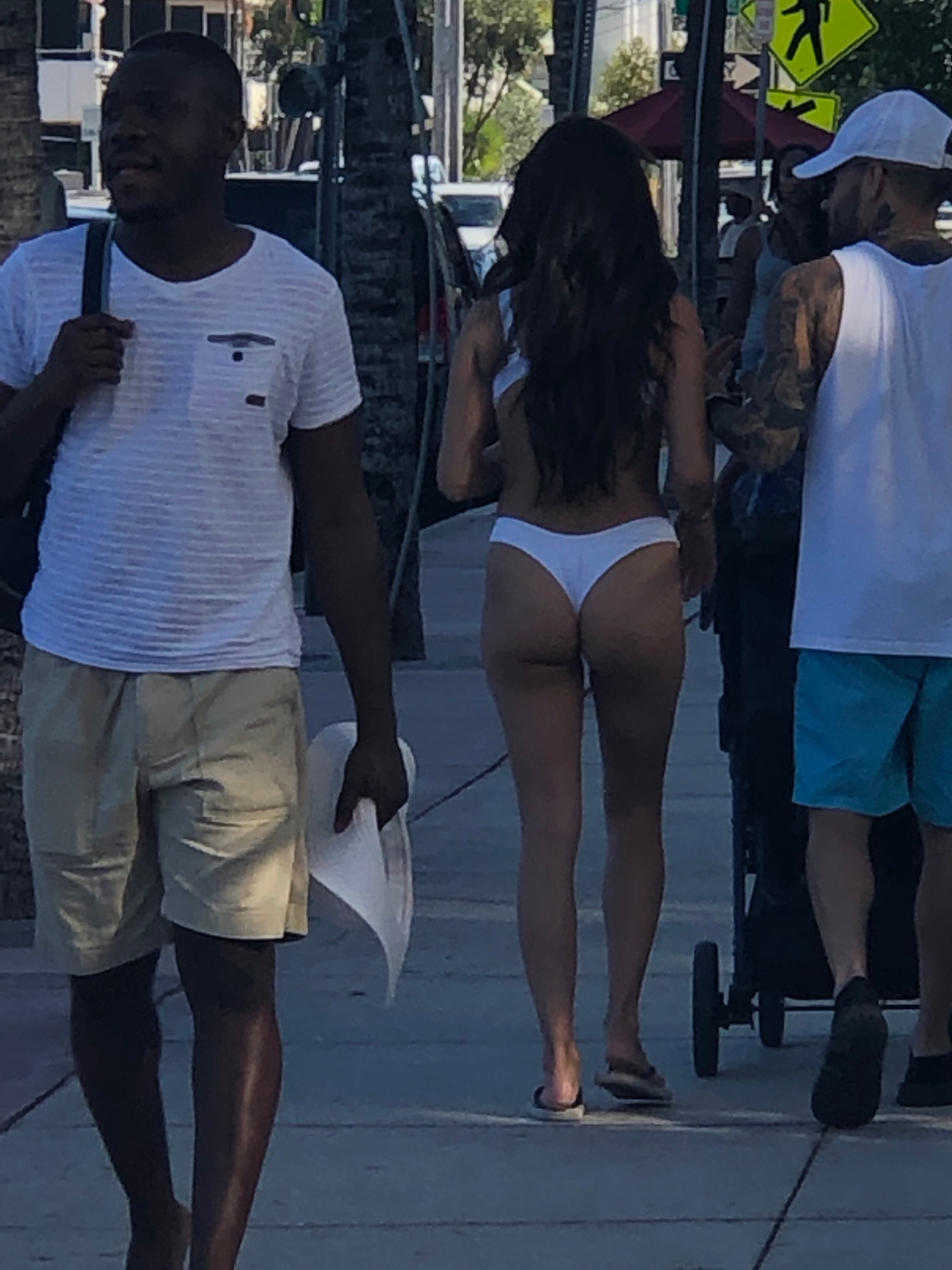