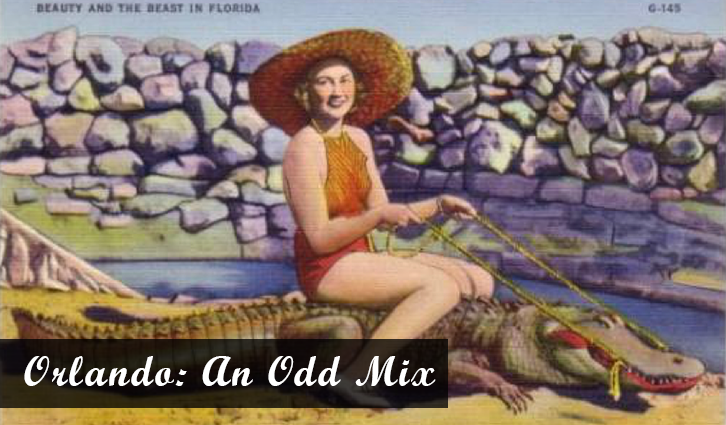 Beauty and the Beast, as apt a metaphor for Orlando, Florida as I can think of at the moment

The first book in my new shapeshifter series is Buy Me Love, and it will be available at Amazon, Barnes & Noble, Google Play Books and Kobo on May 11.

On Easter Sunday I went to Leu Gardens. Over the years I’ve gone there easily three or four times, just because I love botanical gardens and enjoy wandering around them. This time I went with notebook in hand to get firmly in mind specifics about the flora in Central Florida.

I’m digging into the second book in my shapeshifter series, which is set in Orlando, Florida. (Book 1 is set in London.) I always want the location of my stories to come to life as a kind of character. I want my readers to have a sense they’re there.

At the garden, I learned that Orlando’s climate is subtropical, which means that it’s a mixing ground where temperate and tropical plants grow side by side. 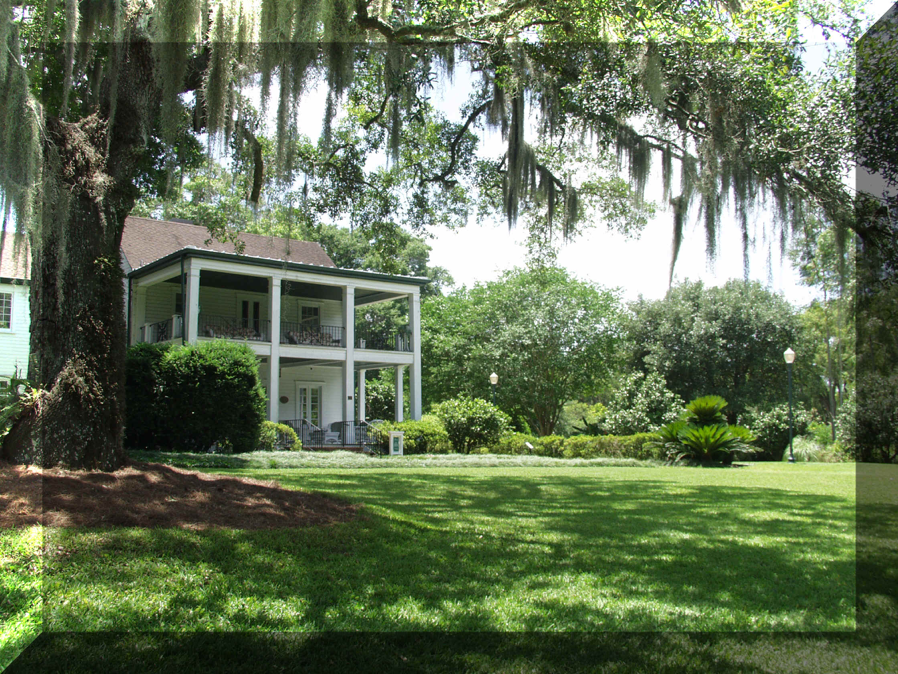 Leu House Museum in Leu Garden. It’s framed by a southern live oak and looks like it could be in North Carolina except that its lawn is studded with palms

I grew up in suburban Chicago, and Orlando’s subtropical climate is part of what gives the strange-yet-familiar vibe I feel here. I can be walking from my condo in downtown through Thornton Park and think I’m in Glenview by the look of the houses with their neat yards. But what’s in them is foreign. 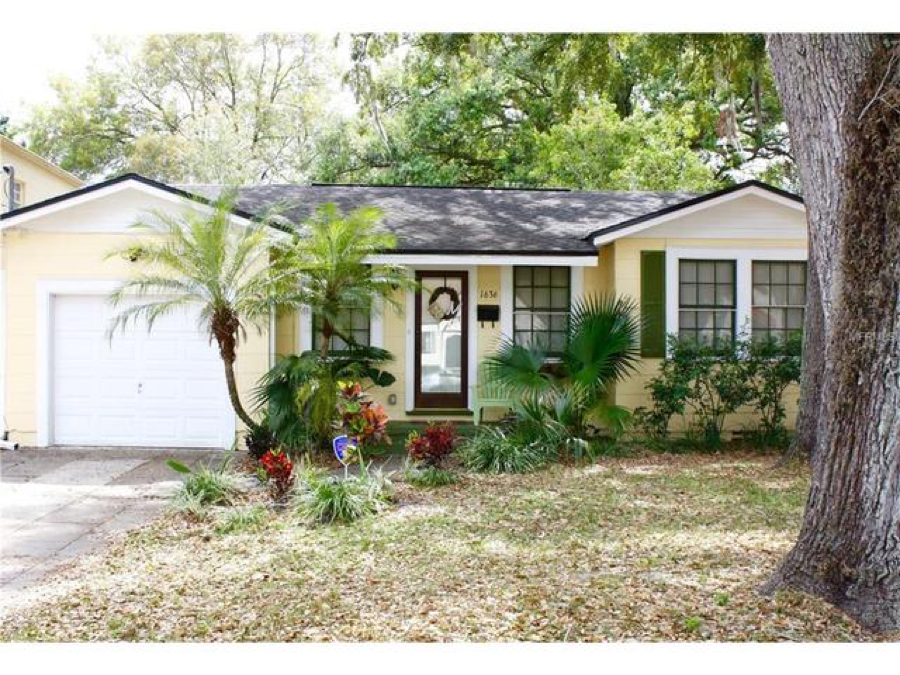 What’s above our heads is just as mixed. I’ve long loved Orlando because it lives under the northern limit of the Caribbean sky. At its most characteristic, it’s an extravagant blue with billowing cream clouds whose fat underbellies are tinged pink, and the air is soft and moist. But there are times when the North intrudes, and there’s a chill in the air and a gray cast to the sky that is never found in, say, Miami.

The real and surreal meet and mingle here, as well. Most of the time Orlando is a normal kind of town, but then ten miles down I-4, you have: 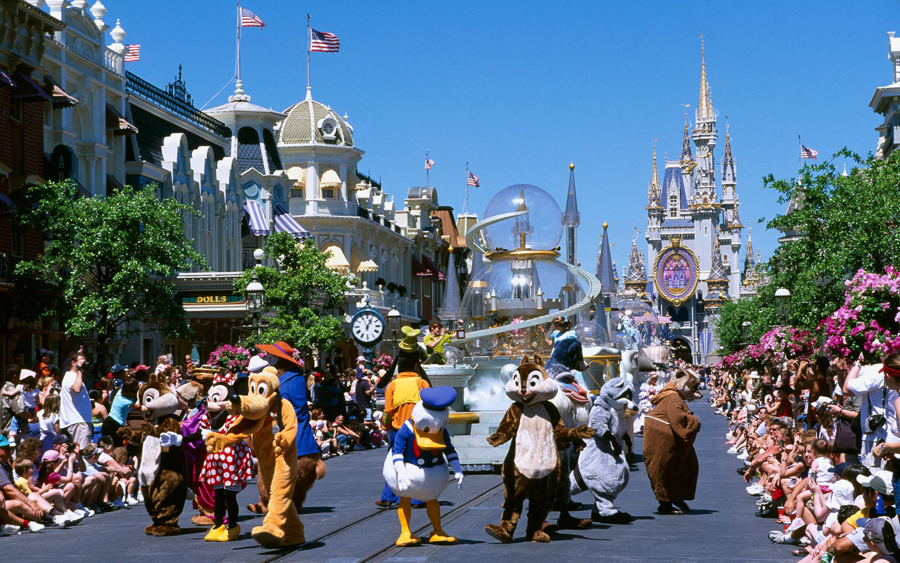 … and Disneyfication seeps into town by way of Disney tax dollars, which means the downtown is spectacularly well maintained and grit-free. Things here are more apt to resemble candy than anything else. 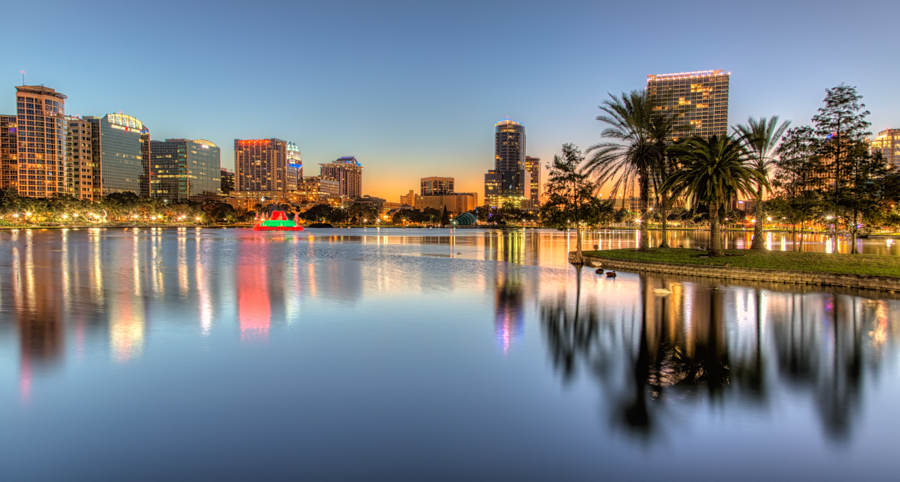 Lake Eola. The fountain looks like a Christmas gumdrop

Back to Leu Gardens. There I was reminded that the living things inhabiting this corner of the world are equally strangely juxtaposed. 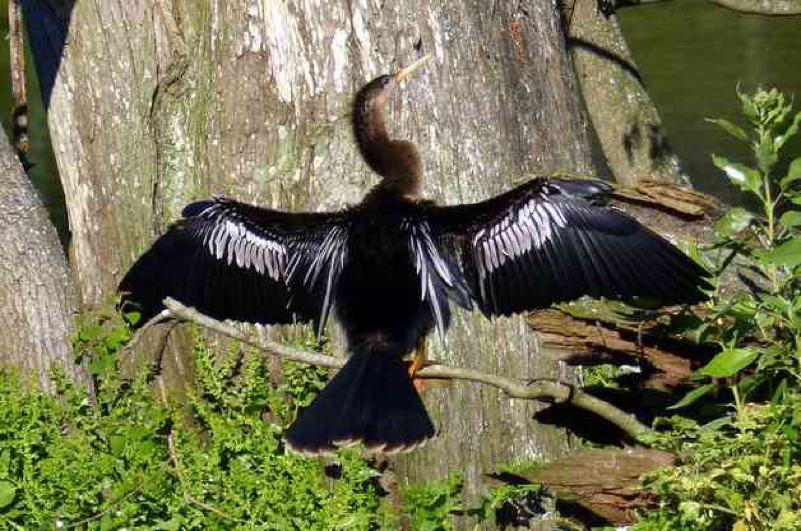 which are predated by ancient reptiles, many ferocious: 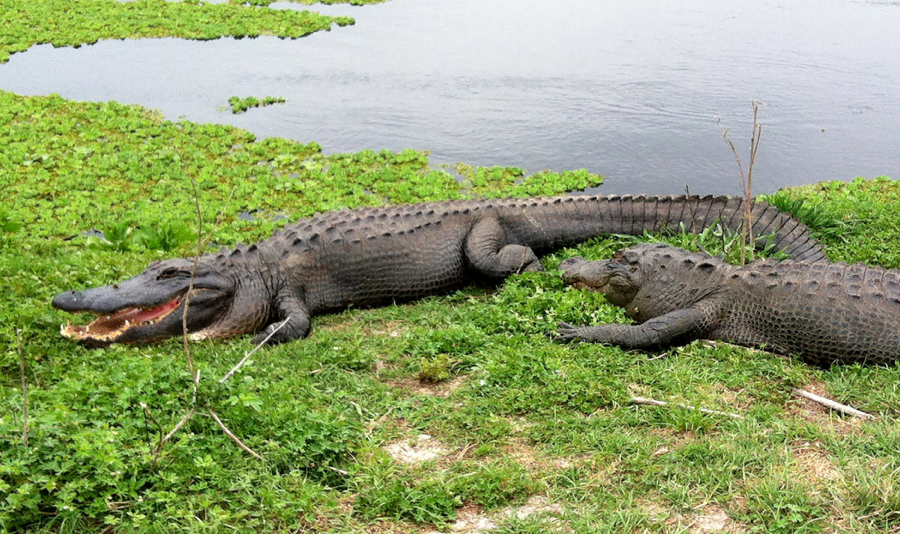 Note: Although millions of people live in the same habitat as millions of alligators, death by alligator is relatively uncommon. In the last 70 years only 23 people have died from an unprovoked alligator attack. By comparison, in 2014, 2494 people died in car crashes in Florida. Even lightning kills more than gators. Since 2006 51 people in the state have died from lightning.

Oldest of all are the ferns: 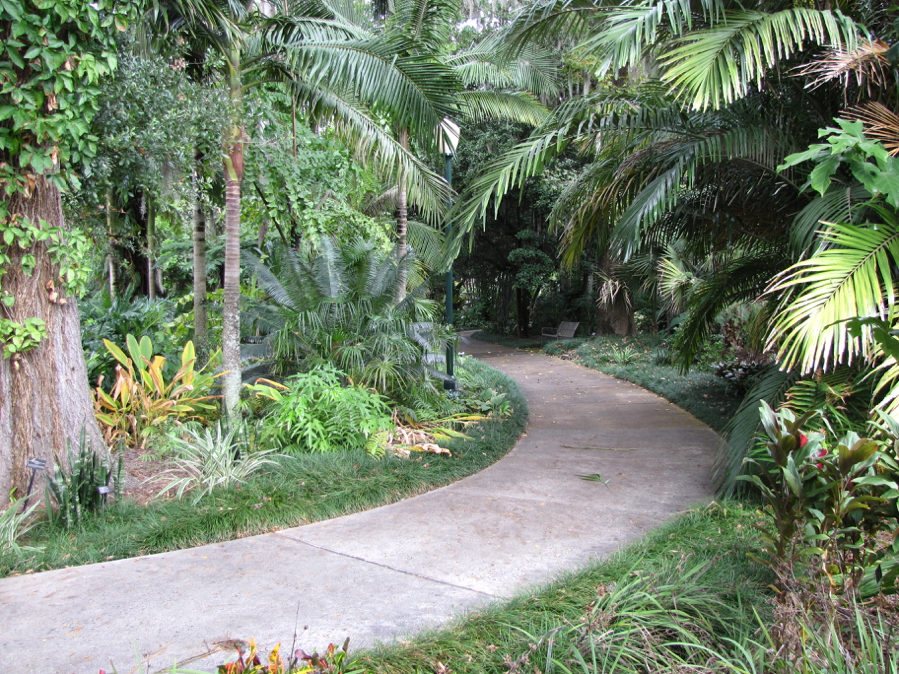 People are the newcomers, arriving only about 14,000 years ago.

I’ll pick up the story in the 1920s with the land boom, Florida’s first real estate bubble that burst in 1925. The Marx Brothers spoofed it in their 1929 movie The Cocoanuts. Here’s a clip:

Walt Disney World opened in 1971, and now the theme parks in Orlando, Florida bring in 66 million people annually, attracting into our ecosystem such exotica as: 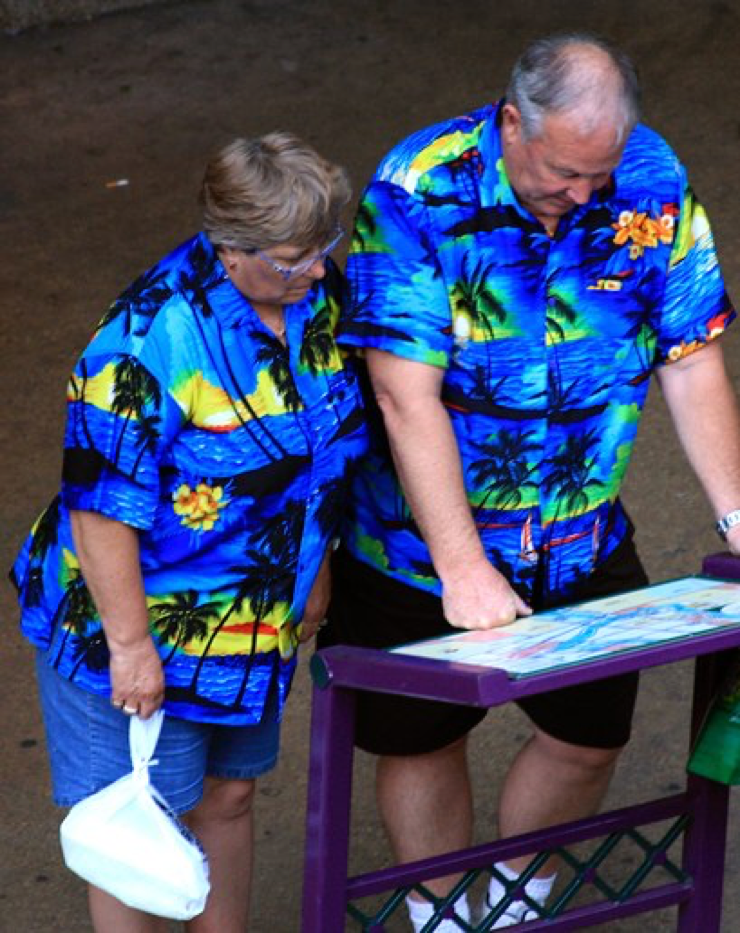 Orlando, Florida has its beauties and it has its beasts, and both sides of this equation are unique and likely unparalleled. In the story I’m about to start writing, it will be a challenge to create a sense of the peculiarity of this place: at once familiar and foreign, beautiful and ugly, normal and loopy, tropically sleepy and exuberantly active.

I’ve begun by trying to get a handle on the local plants, starting with finally learning the names of the stunning array of both temperate and tropical trees. 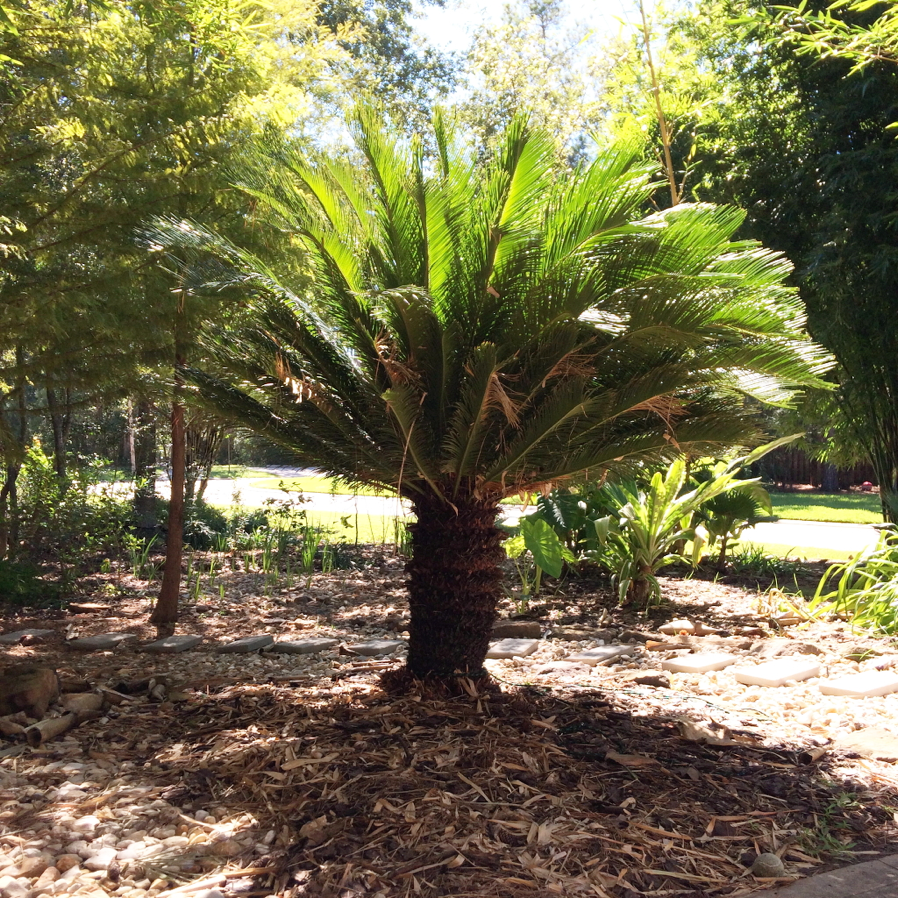 A cycad king sago – the Danny DeVito of palms 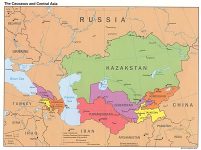