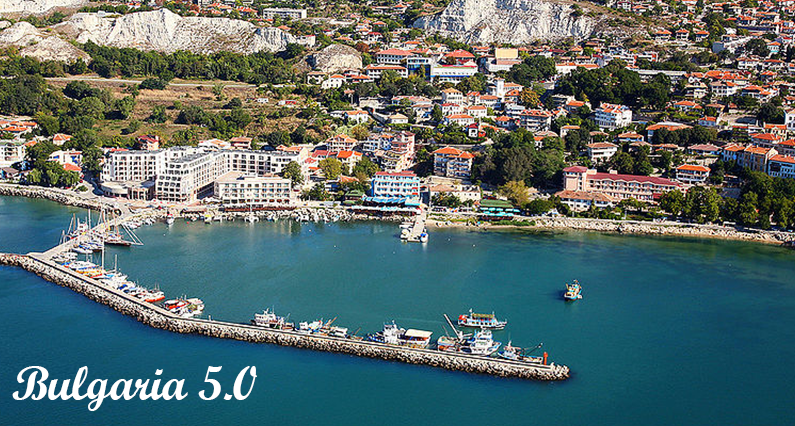 Note: This is a repost of the blog post I wrote last year when I was in Balcic, Bulgaria.

This is the fifth year in a row I’ve come with my Romanian friends to Balcic (also spelled Balchik). It’s on the Black Sea. This year is a bit of an extravaganza. Three of us decided to reserve one of the apartments at the hotel we always stay at, The Regina Maria. It has two bedrooms, two bathrooms, a living room, a kitchen area, and a spacious balcony.

The hotel is a fifteen-minute walk from the center of Balcic. It’s right at water’s edge, so no traffic, no noise, only the soothing sound of the waves day and night. Over the years we’ve upped our ante from staying three nights to five.

This year other friends have joined us. They have rooms at a hotel in town. With our large balcony we’re party central. 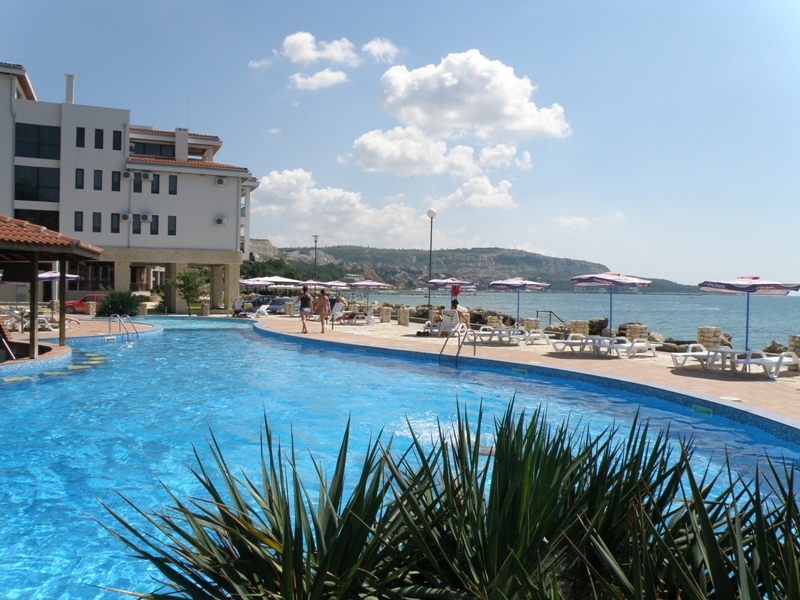 I particularly like the swimming pool bar with the sunken stools whose tiled roof you can see jutting out from the left of the picture.

The covered terrace, set out over the water, is also nice. It is particularly wonderful for breakfast. 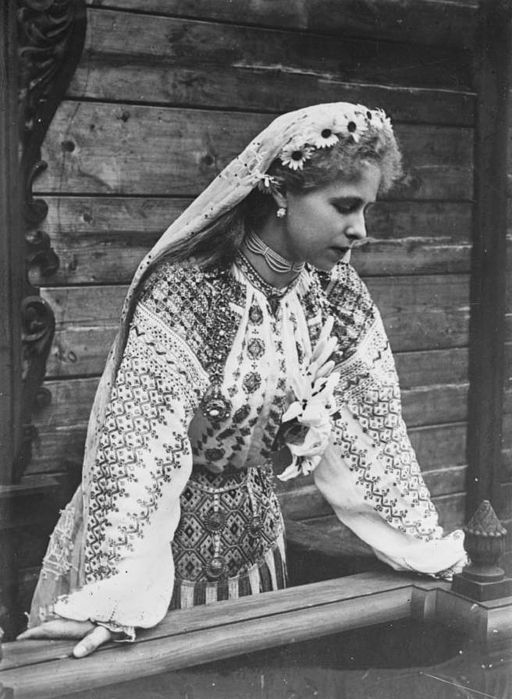 Romanians like to come to this part of Bulgaria, perhaps because it was once part of Romania. Regina Maria was Marie of Romania (1875-1938). She loved the seaside here, and stayed in a castle located next to the hotel where I stay.

By the way, she was the daughter of Alfred, Duke of Saxe-Coburg and Gotha and the Grand Duchess Maria Alexandrovna of Russia. She was the wife of King Ferdinand I and the last queen of Romania.

She fully embraced her adopted home, which is why I chose a picture of her wearing costum popular, traditional clothing that is magnificently embroidered.

Whenever I think of Regina Maria, I can’t quite get Dorothy Parker’s ditty out of my head:

Oh, life is a glorious cycle of song,
A medley of extemporanea;
And love is a thing that can never go wrong;
And I am Marie of Romania.

The sly cynicism always gives me a kick.

There is talk here and there of reuniting Romanian-speaking peoples. Moldovans, for instance, speak both Romanian and Russian. Moldova shares a border with Ukraine. Wouldn’t the world be a fun place if the Romanians starting doing just beyond Ukraine’s western border what the Russians are doing in eastern Ukraine?

That much fun I don’t think this part of the world can handle.

Linguistic notes: The minute you pass the border between Romania and Bulgaria, the alphabet switches from Roman to Cyrillic. Bulgarian is a South Slavic language.

Last summer we heard more Russian in Balcic than we are hearing this summer. The speculation is that Russians don’t have money. BTW, Russian is an East Slavic language.

The seaside soundtrack tends to be English. On our tour bus on the way down the movie was Johnny English starring Rowan Atkinson, in English with Romanian subtitles. Why that movie? (Both: why was that movie chosen for the bus? and Why was that movie ever made?) The music playing on the speakers around the hotel pool is 80s, 90s, and 00s English-language pop. Today I heard thrown in the mix what is probably Bulgarian rap.

In the evenings at the open-air restaurants, if there’s live music, it tends to be Bulgarian folk songs so the audience can sings along, if they like.

Final word on Balcic. Regina Maria’s castle is famous for its hilltop gardens. They’re magnificent – so I hear.

I confess I’ve never visited them. I’m on my lovely balcony now, looking at pictures of them on the net. The castle is right next-door. Seriously. I have the very same view as the one depicted in this picture. Am I going to get my lazy self over to see the gardens in person?

I really can’t say at the moment. Sitting where I am right now is just too nice to think of moving.