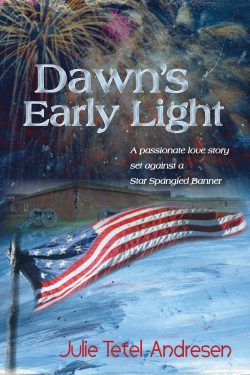 A swirl of petticoats disappearing up a tree is James Stewart’s first sight of the impetuous Miss Jane Shaw as she climbs back into her second-story bedroom window. And though he wonders whom she met at her early morning rendezvous, he wonders even more what she’d look like without all that lace to hide behind. But, as a solider wearing a red coat, he has to stay away from Jane Shaw and keep a cool head on his shoulders if he wants his mission to be a success.

Jane Shaw has had enough of the arrogant British soldiers who have overrun her family’s farm in Maryland. Good strategic position to launch an attack on Washington, D.C., they say. Not if she can help it! But then there’s the impertinent British soldier Stewart who has an uncanny knack for turning up at the most inopportune times. Usually when she’s half-dressed. And if the truth of her activities becomes as hard to hide from him as her womanly charms are proving to be, then her secret cause is surely lost.

It’s August 1814 and the fledgling United States is fighting – and losing – the Second War of Independence. But Jane is in the perfect position to relay valuable information about British strategy. Is James going to foil her plans?