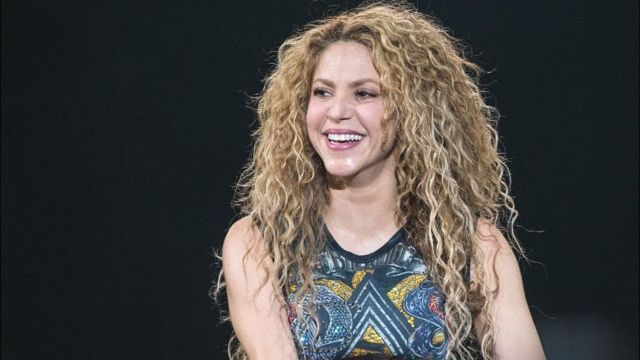 This week marks my first foray into international travel in a year and a half. That is, since the beginning of the pandemic. I am currently in Medellín, Colombia. I will start my exploration of this beautiful country by identifying ten famous Colombians.

It would be nice to put the former President of Colombia Juan Manuel Santos in the number one spot as the most famous Colombian. After all, he won the Nobel Peace Prize in 2016 for bringing the country’s more than 50-year civil war to an end. Quite an achievement! 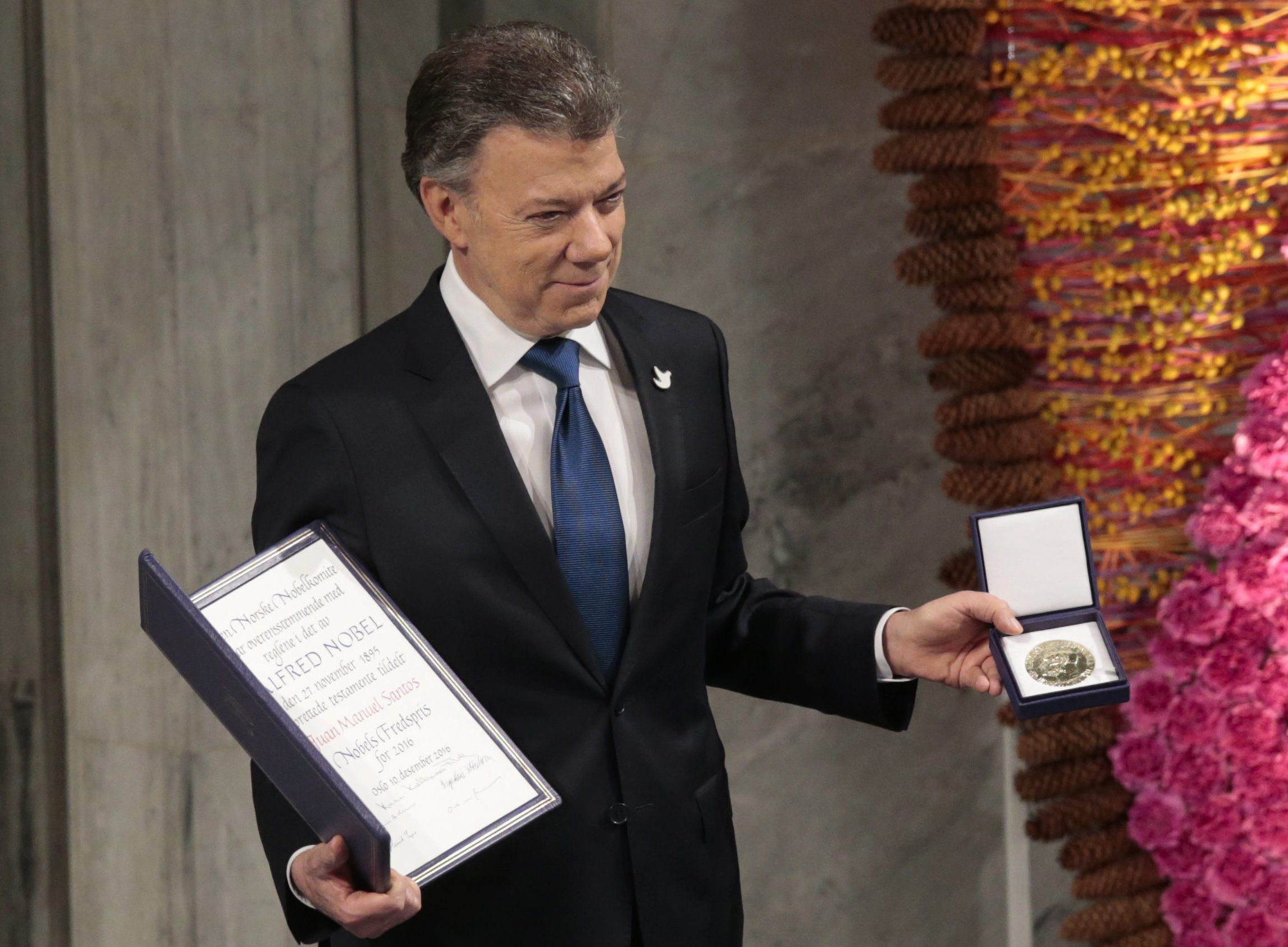 However, the reality is, when it comes to famous Colombians, Shakira – the Queen of Latin Music – has to top the list. Thus, she is the title image.

With a catalog 145 songs, she has sold over 75 million records. As such, she is one of the world’s best-selling artists. She has received numerous awards. These include Grammys, Latin Grammys, MTV Video Music, Billboard Music, Latin Billboard Music. And the list goes on.

In addition, she has 34 million subscribers to her YouTube channel. 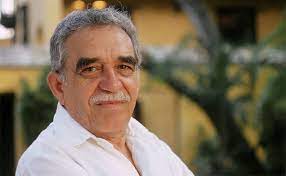 He is particularly well known for One Hundred Years of Solitude (1967) and Love in the Time of Cholera (1985).

Upon his death, then-President Santos called him “the greatest Colombian who ever lived.”

Who could it be other than Sofia Margarita Vergara? We all know her from Modern Family. 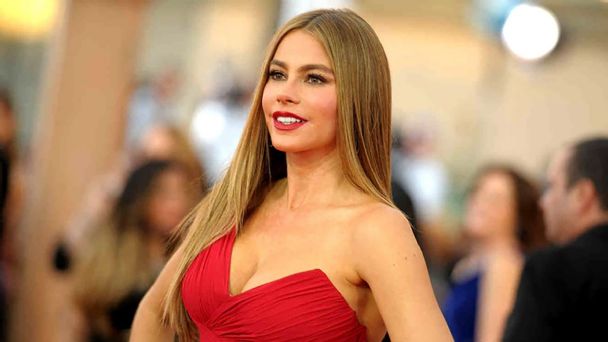 I know, I know. I should refer to her as an actor. However, there may have been male actors who were more highly paid in the period from 2013-2020.

(Just checked: it’s likely that Daniel Craig and Dwayne The Rock Johnson out-earned her in 2020. Thus the need to identify her in the category ‘female’.) 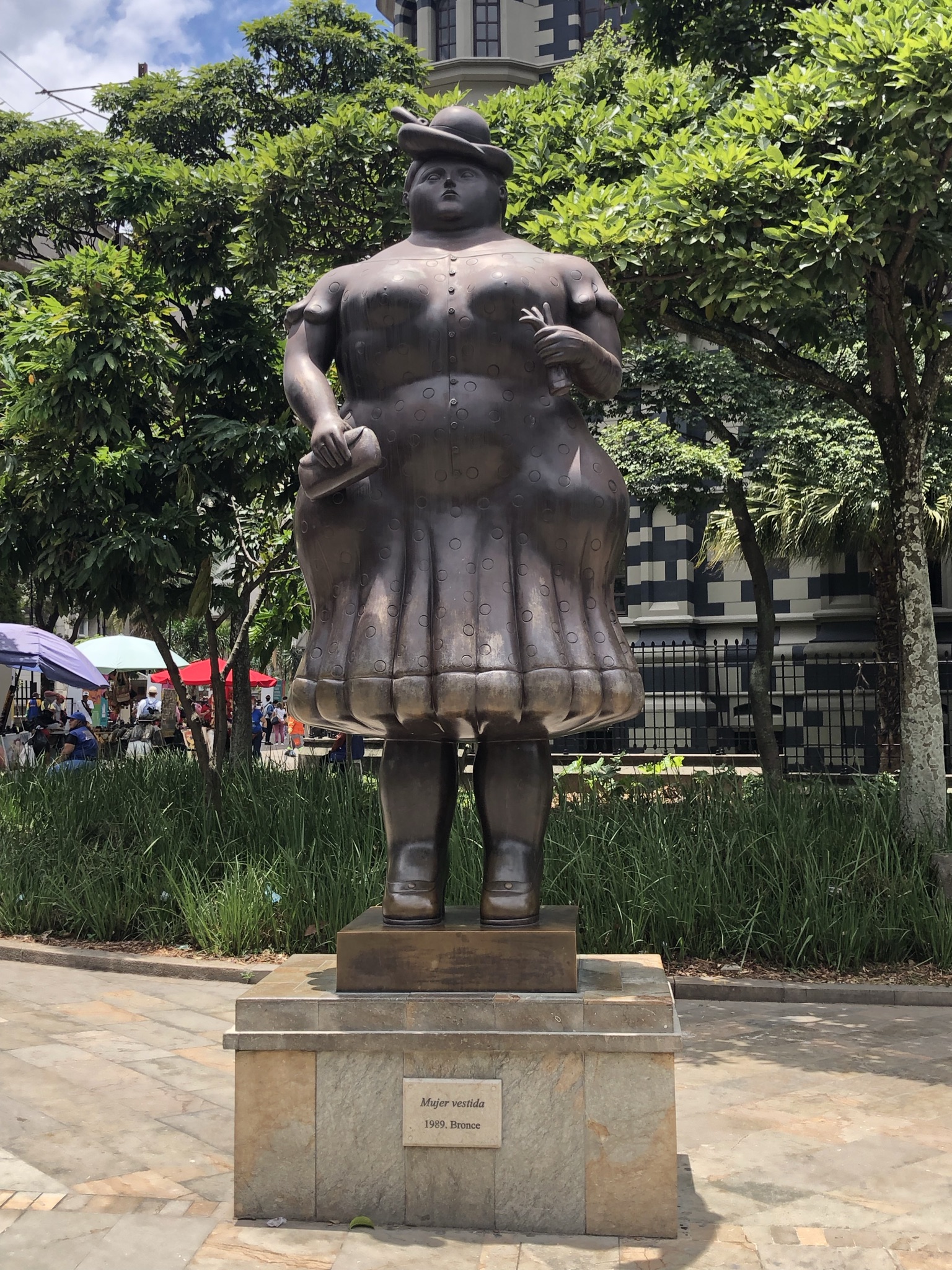 Fernando Botero Angulo has an immediately recognizable aesthetic. He loves all forms large and bulbous. And he is mostly concerned with the human form.

He was born in Medellín where I am now. And I can assure you he has made his mark on this city. Plaza Botero is in the center and features dozens of his statues. One such is Mujer vestida.

The Museo de Antioquia is also on Plaza Botero. And it is full of his prolific work.

Note: Antioquia is one of Colombia’s 37 provinces. Medellín is the capital.

More on Botero in a later blog.

Carlos Alberto Valderamma Palacio is Colombia’s most famous footballer (soccer player). He is also known as El Pibe ‘The Kid.’ He had an impressive 20+-year career from 1981 – 2022. 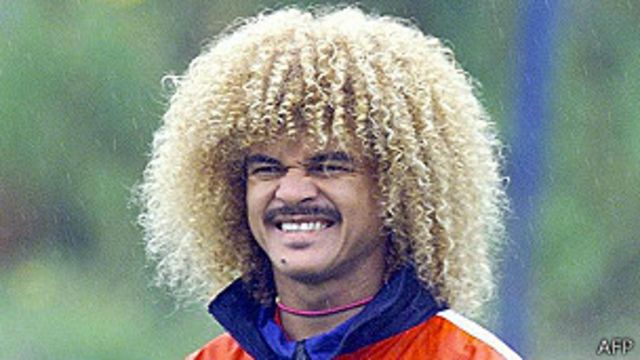 He was an attacking midfielder. About all I can say is, “Yeah, it’s the hair.”

Nairo Alexander Quintana Rojas is the top Colombian cyclist. Among his many achievements are his second overall places in the Tour de France in 2013 and 2015. 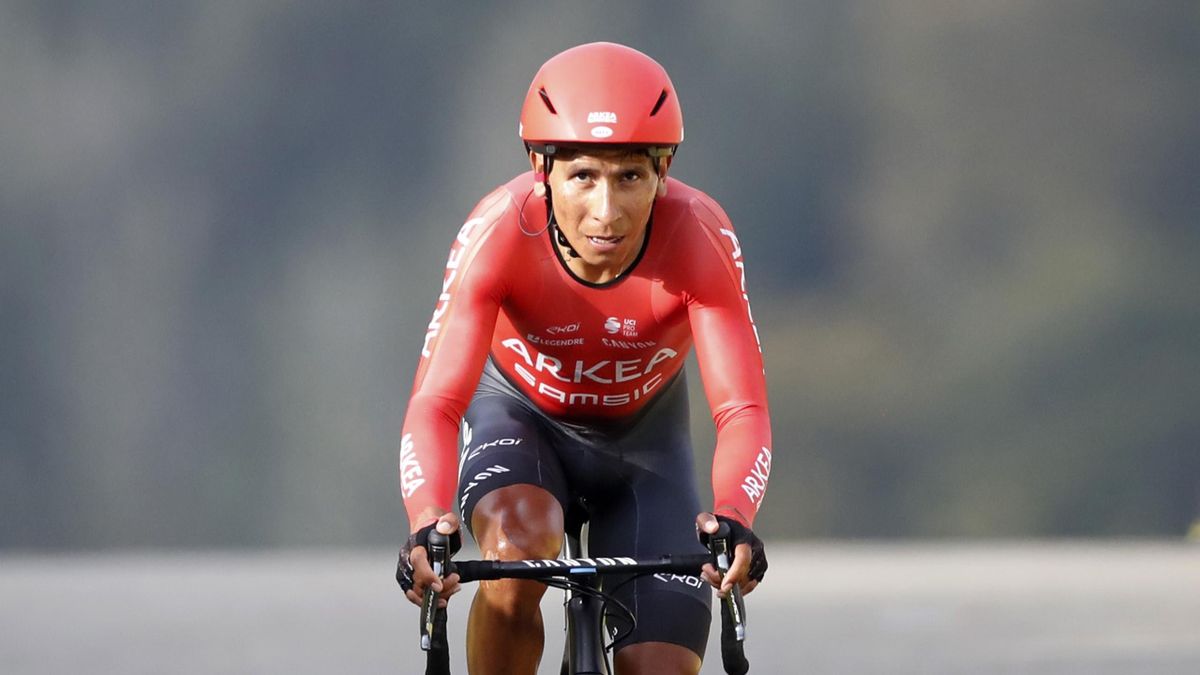 Cycling is big in Colombia. The elevation of Medellín, for instance, is 1495 m. (Denver, by way of comparison, is 1609 m.) Colombian cyclists train in high elevations and in mountainous conditions. And, thus, they compete very well on the world stage.

Famous Colombians: The Most Infamous

Because he is so well known, I have to include the most infamous Colombian of all time: Pablo Emilio Escobar Gaviria (1949-1993).

Escobar – aka The King of Cocaine – was a drug lord and narcoterrorist. He founded the Medellín Cartel. And was the wealthiest criminal in history. Plus made life miserable and dangerous for ordinary citizens of Medellín.

For my image of him I give you Botero’s La muerte de Pablo Escobar: 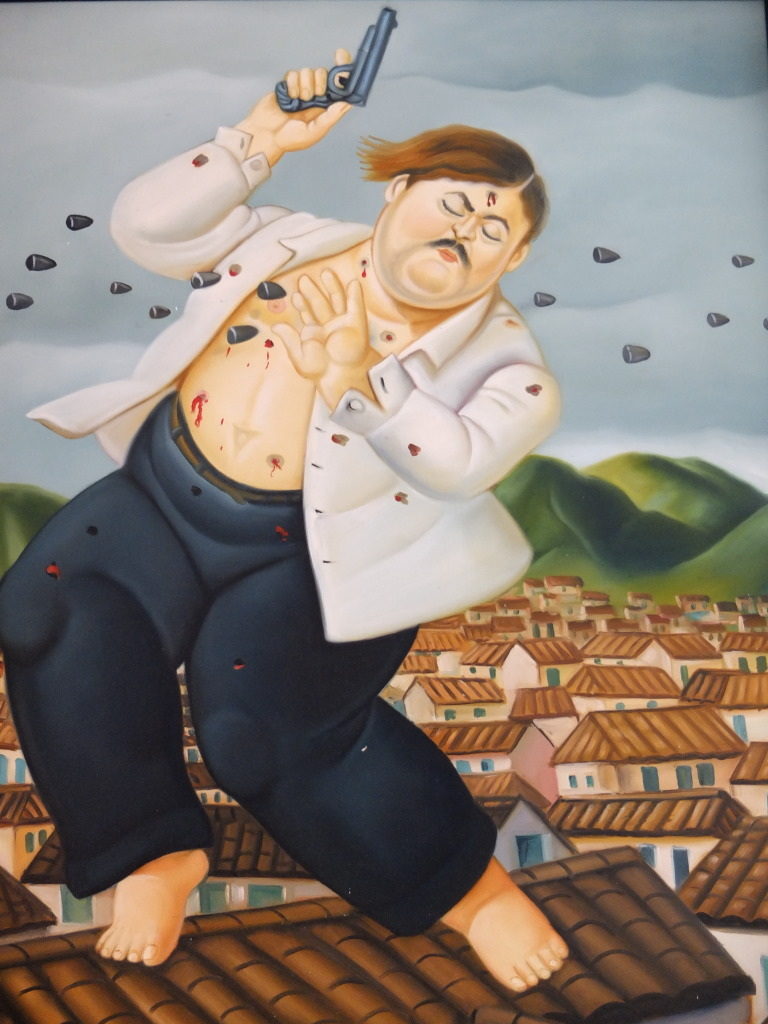 This painting is the property of the Museo de Antioquia. I saw it but, as usual for museum policies, I was not able to photograph it myself.

Netflix has a series entitled Pablo Escobar, el patrón del mal. I started to watch it but decided not to give my time to this person.

I’ll finish up on, literally, a better note with:

Carlos Alberto Vives Restrepo is a singer, songwriter and actor. Vives rose to fame in the 1990s. This is when he turned his singing career toward a form of popular Colombian folk song, known as vallenato. The term means “born in the valley.”

He teamed with up with Shakira for “La Bicicleta”:

Vives paved the way for other Colombian singer-songwriters, including:

Juan Esteban Aristizábal Vasquez – known as Juanes – was a member of the rock band Ekhymosis. He is now a solo artist. He has won three Latin Grammies. Listen to his “Es Por Ti”:

Finally in the music category, we have Juan Luis Londoño Arias, known as Maluma. 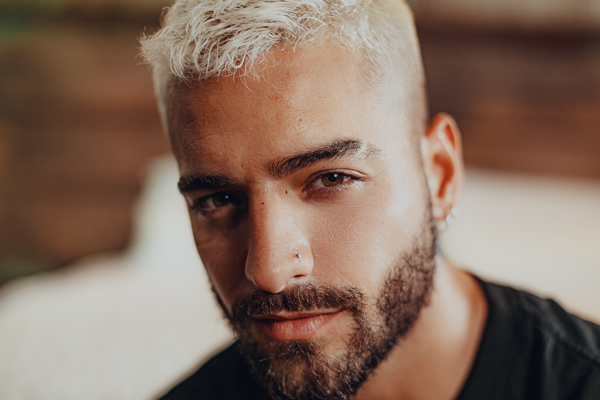 Guess what? He’s on a world tour now, called Papi Lounge. That is, if I understand his website correctly. You can buy tickets to his Phoenix, Arizona event this week (September 23).

These talented folk (plus one evil guy) are my Top Ten!