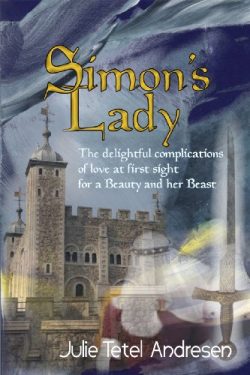 Simon of Beresford is a man’s man. He’s a proud warrior who is fiercely loyal to King Stephen. He is also a widower content with his five sons and single state. When asked by Queen Matilda to make a political alliance through marriage to Gwyneth of Northumbria, he is both dumbfounded and aggrieved. He has no head for politics but knows where his duty lies and so agrees to this scheme of holy matrimony, albeit with very bad grace.

Gwyneth of Northumbria is a newcomer to court, since King Stephen’s forces have just killed her husband and his men and brought her to London. She has no difficulty understanding why she is being married off. But she is truly appalled when she meets the brute she is to wed, a man with no manners and no tact.

Once having laid eyes on the most beautiful woman he’s ever seen, Simon’s eager for the wedding night. And Gwyneth quickly discovers that what her husband lacks in charm, he makes up for in brute masculinity.

The political forces that brought Gwyneth to the court are still blowing through the kingdom. King Stephen clings to his throne, but a young, upstart Henry is gathering forces and followers. Simon will forever be Stephen’s man but he cannot be sure of where Gwyneth’s loyalties lie. When he suspects her of being a spy in Stephen’s court, the fragile bond they have been able to form is threatened.

But Gwyneth knows who the real spy is, and she also knows this villain is set on destroying both her and Simon. Can she expose this spy’s treachery in time?